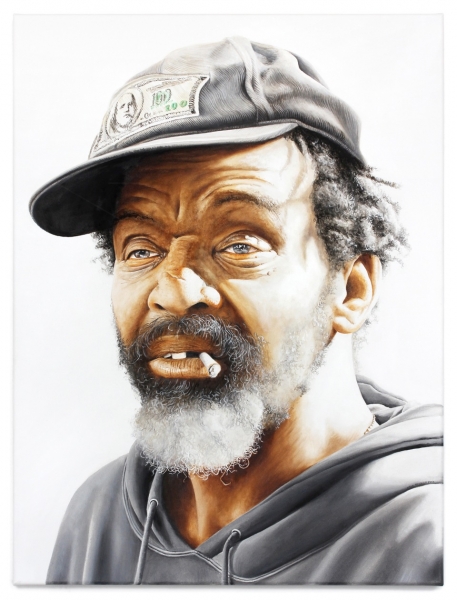 White Walls Project Space is pleased to announce Les Clochards Célestes by Amsterdam-based artist Adele Renault. The opening reception will be Saturday, March 15, from 7-11 pm, and the exhibition is free and open to the public for viewing through April 5, 2014.

Painter Adele Renault looks where most people tend to ignore, especially when wandering the streets of San Francisco’s Tenerloin. Visiting regularly since 2010, she started to recognize the outdoor inhabitants, first the pigeons then the people.

Les Clochards Célestes is the French translation of The Dharma Burns, Jack Kerouac’s novel that is set in San Francisco’s bohemain scene in the late fifties. The word ‘celestial’ has heavenly connotations but literally means ‘of the sky’. This adjective suits both the homeless and the feathered which make up Renault’s new body of oil paintings.

Renault’s portraits are nonvoyeuristic, isolated from their surroundings, enlarged and bathed in sunlight. She engages with the individual and always starts a painting with the eyes. “After that”, Renault states, “the soul reveals itself and painter and painting start to breathe together”.

Adele Renault (1988) is a painter, who does realistic portraits of overlooked subject matter, working in scale from intimate canvasses to wall-sized murals. Renault grew up in a musical family on a farm in the Belgian Ardennes. She studied and practiced visual arts, from classical oil painting to modernday spray graffiti. In 2010 she graduated from the Academie Royale des Beaux Arts in Brussels with a degree in Graphic Design.

Renault is fascinated by the inconspicuous beauty of everday objects and subjects. She observes closely those and that not considered worthy of a second look. Her subjects are pictured as photographed, yet are then isolated from their context, and flooded in light. She captures moments and expressions full of stories and meaning. Suddenly a scruffy pigeon or a woman in the last days of her life emanate a quiet grace and irresistible strength.