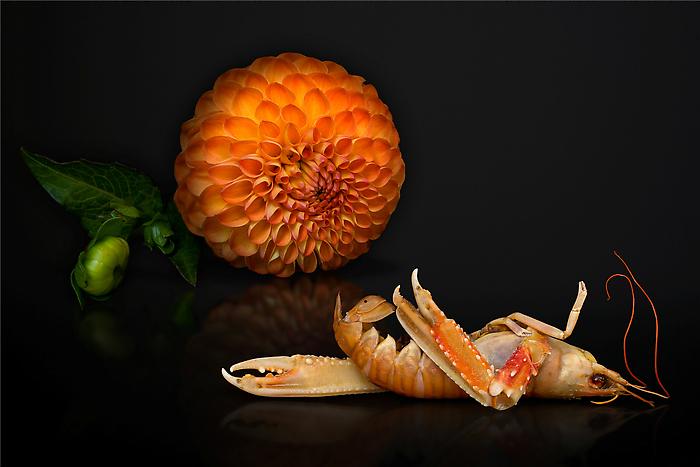 Connersmith in Washington presents Agniet Snoep’s “Alive and Present” from April 12 until May 31, 2014. The Dutch artist’s first U.S. solo exhibition features a recent series of photographs inspired by the still life tradition in the golden age of Dutch painting. Snoep’s pictures are stunningly beautiful, uncompromisingly detailed, and provocatively strange.

The artist deploys still life to explore meanings that arise from new pictorial associations. Snoep asserts, “I’m not a still life photographer. I use the genre to express my theme.” Her position has profound personal and cultural resonances. She draws inspiration from the work of her seventeenth-century ancestor, Ambrosius Bosschaert, particularly from “Dead Frog with Flies,” a painting he made in Holland around 1630, now in the Fondation Custodia (Frits Lugt) in Paris. The Dutch author, F. Bordewijk, saw Bosschaert’s work in 1935 and wrote, “The macabre impression of the present is immediately intensified by the sinister of what is coming. So it doesn’t show the excess of the horrible, but leaves room for the imagination of the viewer.” Snoep explains, “I recognized, in the perfectly painted flies and (Bordewijk’s) description, my own inspiration for the use of insects in my work. This was the reason to give insects meaning in the tradition of Dutch still life.”

The intimate displays of curiosities in Snoep’s works seduce viewers’ imaginations beyond the material surfaces she photographs. Creating psychological tensions and opening possibilities for personal interpretations, the artist subverts the apparent objectivity of the camera’s lens.