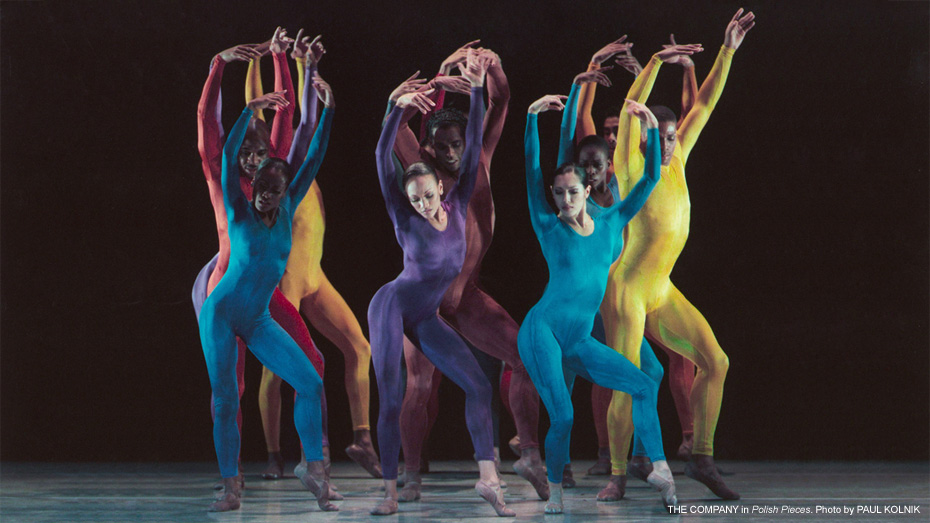 In this exuberant ensemble work, Dutch choreographer van Manen displays his mastery for building dazzling creations from simple motifs and geometric patterns. Driven by the rhythms of Henryk Górecki’s score, the dancers come together and disperse in endlessly shifting formations that culminate in two sensual pas de deux. A dazzling gem of colorful and playful movement built on simple motifs and geometric patterns. The ensemble of dancers create a brilliant kaleidoscope of energy that’s contrasted with two sensual and lyrical pas de deux. As Artistic Director Emerita Judith Jamison remarks, “Polish Pieces is quite wonderful. It shows how still we can be. How quiet. How dynamic and textured the company can be and how wonderful we look in bright colors. There’s nothing like an Ailey body in,…shocking colors!”

Hans van Manen began his career in 1951 as a member of Sonia Gaskell’s Ballet Recital. In 1952 he joined the Nederlandse Opera Ballet, where he created his first ballet, Feestgericht (1957). Later he joined Roland Petit’s company in Paris. He began to work with the Nederlands Dans Theater in 1960, first as a dancer (until 1963), next as a choreographer, then as Artistic Director (1961- 1971). For the following two years he worked as a freelance choreographer before joining Het Nationale Ballet in Amsterdam in 1973. From 1988 – 2003 Hans van Manen was a resident choreographer of NDT, in 2003 he joined the Dutch National Ballet as a resident choreographer. His body of work counts more than 120 ballets, each carrying his unmistakable signature. Clarity in structure and a refined simplicity are the elements in his work which have earned him the name ‘the Mondriaan of dance’. Outside of the Netherlands, he has staged his ballets for such companies as the Stuttgart Ballett, Bayerisches Staatsballett München, Berlin Opera, Houston Ballet, National Ballet of Canada, Pennsylvania Ballet, English Royal Ballet, Royal Danish Ballet, State Opera in Vienna, Tanzforum in Cologne , Compañia Nacional de Danza and Alvin Ailey.

For more information about locations and tickets visit: Alvin Ailey.