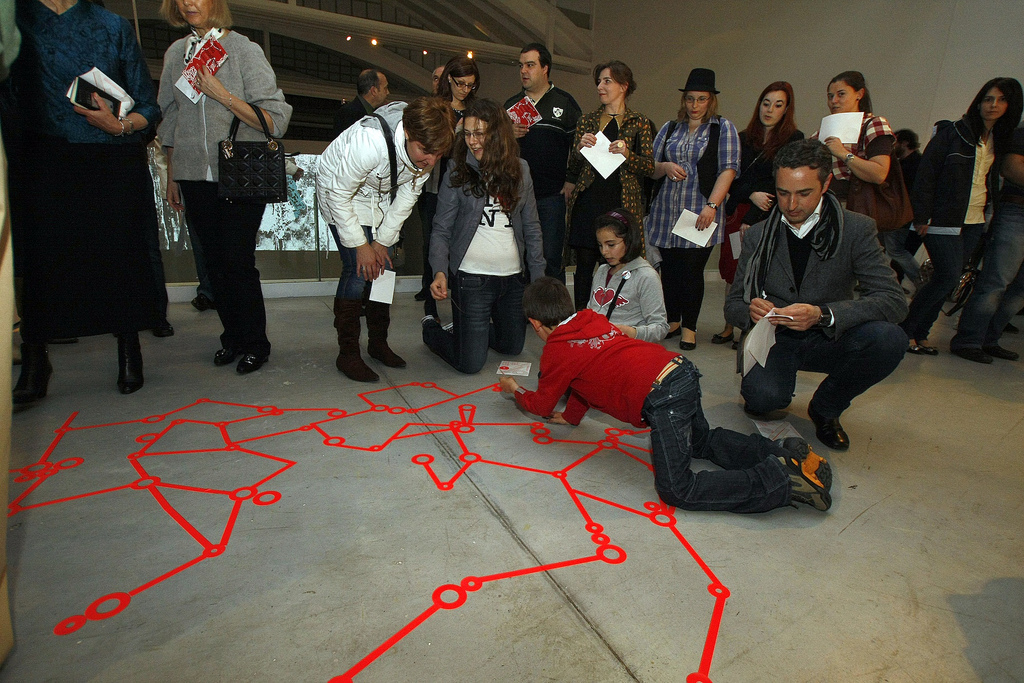 SOMArts in San Francisco presents "All Possible Futures," a group exhibition featuring work by many Dutch graphic designers from January 14 until February 13, 2014, with an opening reception on Friday, January 16, 6-9pm

From January 14 until February 13, 2014, SOMArts in San Francisco presents “All Possible Futures,” a group exhibition featuring work by many Dutch graphic designers. A opening reception will take place on Thursday, January 16, 2014, 6-9pm, when gallery visitors may also participate in the interactive, evolving installation “Polychrome Fungus” by MONIKER. Curated by Jon Sueda and featuring 37 projects by Bay Area and international artists, All Possible Futures is the first of three SOMArts Commons Curatorial Residency exhibitions in 2014. The group exhibition explores the potential of graphic design and celebrates a questioning of boundaries regarding concepts, processes, technologies, and form. Contemporary speculative pieces take the form of both physical objects and restaged installations.

What happens when graphic designers extend the boundaries of their discipline and initiate creative explorations built on risk and uncertain ground? Exhibited conceptual proposals, critical provocations, and experimental works that exist on the margins of graphic design or in parallel to professional projects, as well as proposals that were initially rejected by a client and remain unrealized, position All Possible Futures at the intersection of design and fine art.

The exhibited work highlights different levels of visibility and public-ness within the graphic design process. Some projects were made for clients and exist in a real-life context, while others might otherwise have gone unnoticed: failed proposals, experiments, sketches, incomplete thoughts.

“PenJet” is a collaboration between graphic designers Jaan Evart, Julian Hagen and Daniël Maarleveld. The project originated from experimenting with the movement of printer heads. This result was a modified printer which records the movement of the print head using an attached pen. “PenJet” shows the handwriting of the machine, some fine and straight, others messy and fluent. The final result has both the imperfections of handwriting and the preciseness of a machine. However, no matter much control there is, the printed result remains unpredictable and every page is unique.

Self-proclaimed “Exit-Level Designer” Ed Fella will exhibit “Potential Design for Bygone Eras,” a series of collages and sketches created over the past 20 years that confronts his past and future. He describes it as a design methodology situated in the present but using or reworking bygone eras as a pretend “future.” The project itself is a total contradiction, but to Fella, that’s what gives it potential to lead to so many interesting “formal speculations and mixed-up possibilities.”

“Roller Ball,” created by ResearchCenteredDesign is a dimensional poster, which in this case includes a series of phrases and alphabets. Depending on how you roll the object it creates different compositions and sequences using the phrases and alphabets extruded on its surface, leaving the layout or composition of the imprinted message open to the viewer’s interests and decisions.

In the spirit of the show’s title, the exhibition itself shifts and evolves over the course of the visitor’s experience. Some works are traces of pieces. Others adapt. Still others must be manipulated or engaged in order to become fully apparent. All Possible Futures also looks at how graphic designers have expanded the parameters of the field by consciously taking a transdisciplinary approach, and by considering physical interaction within an art-gallery context.

MONIKER’s “Polychrome Fungus” is a generative participatory installation that should be executed by a large group of people. Participants affix provided stickers on the exhibition floor according to a simple set of rules, working to form an image as a collective during gallery hours and public events. Participants receive instant visual feedback and, with a simple intervention, they change the shape and, potentially, the course of the developing installation.

“Untitled (Narcissus 2),” by Jeremy Mende and Bill Hsu, is an installation that uses a wireless sensor to capture a viewer’s pulse. The viewer hears their own heartbeat and watches that same rhythm drive a series of typographic animations. The animations are representations of an organism— a simple group of cells or, perhaps, an entire community.

All Possible Futures is a 2014 Commons Curatorial Residency exhibition at SOMArts. SOMArts’ exhibition programs are generously supported by the Community Arts and Education Program of the San Francisco Arts Commission, The San Francisco Foundation and individual donors.

All Possible Futures received generous support from swissnex San Francisco and is supported as part of the Dutch Culture USA Program by the Consulate General of the Netherlands in New York. The exhibition and accompanying publication were created with the help of a California College of the Arts faculty development grant. Other partners who have been integral to the success of the project are Bedford Press, Facebook Analog Research Lab, Martin Sign Company, Nonin Medical, Oscar Printing, Pacific Paper Tube, San Francisco State University, and Team Print Shop.