‘An Inner World: Seventeenth-Century Dutch Paintings’ at The Clark Institute

From March 5 until October 1, The Clark Institute presents ‘An Inner World: Seventeenth-Century Dutch Paintings’, featuring 17th-century genre paintings from the Clark Institute and on loan from The Leiden Collection. The exhibition shows seven exceptional genre paintings by Dutch artists working in or near the city of Leiden in the seventeenth century. It explores the work of Gerrit Dou (1613–1675) and his contemporaries by considering tradition and innovation in the representation of figures in interior spaces, individuals in moments of contemplation or quiet exchange, and the enduring taste among collectors for works created by ‘fijnschilders’, or ‘fine painters’. Genre paintings, or scenes of everyday life, flourished in the Dutch Republic in the seventeenth century. The city of Leiden became known as a center of ‘fijnschilders’ as a result of the innovations in subject matter and technique developed by Dou. Being one of the most admired and successful artists in Holland, Dou established a manner of “fine” painting in small-scale, meticulously rendered works, often depicting figures leaning over a stone window ledge. Included in ‘An Inner World’, is the Clark’s newly restored ‘Woman at a Window’ (c. 1655), which displays Dou’s precise brushwork, evocative use of light and shadow, and brilliant handling of different surface textures. Artists and collectors in Leiden greatly admired Dou for his mastery of the brush, as well as his ability to reinterpret traditional subjects like the kitchen maid into a display of playful domesticity. “This show marks the first time 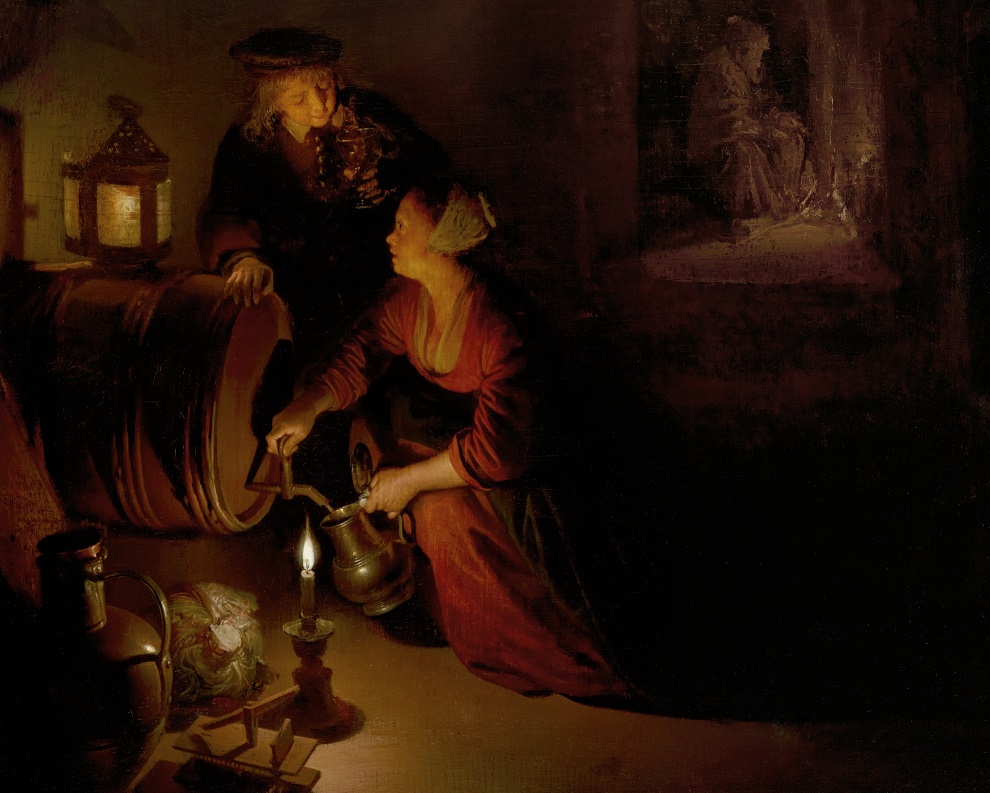 “This show marks the first time the Clark’s painting by Dou is shown in the context of works by his pupils and contemporaries—both well-known artists such as Gabriel Metsu and less familiar artists such as Domenicus van Tol and Jacob van Toorenvliet,” said exhibition curator Lara Yeager-Crasselt. Dou’s pupil and nephew Domenicus van Tol (c. 1635–1676) closely followed his teacher’s example in ‘Boy with a Mousetrap by Candlelight’ (c. 1664-65). 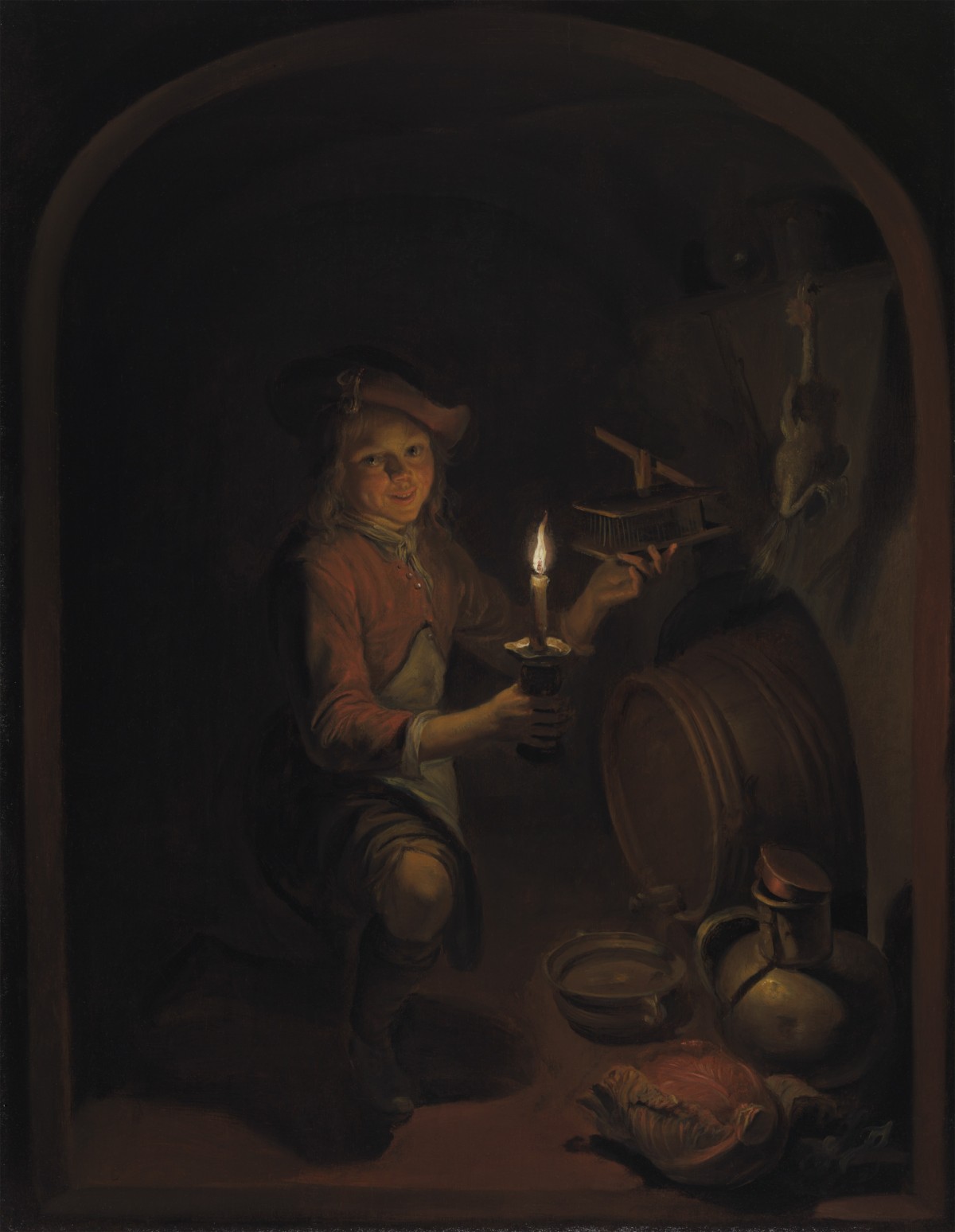 Like Van Tol, Willem van Mieris (1662–1747) and Jacob van Toorenvliet (1640– 1719), painted in the same technique as Dou, capitalizing on his success. Van Mieris continued to produce paintings in the ‘fijnschilder’ technique into the eighteenth century, demonstrating the longevity of this tradition and its continued popularity among collectors. Other artists, such as Gabriel Metsu (1629–1667), responded to Dou in different and inventive ways throughout their careers. Metsu’s innovative brushwork and dramatic increase in the scale of his paintings are a departure from Dou’s style. His large-scale ‘Woman Reading a Book by a Window’ (c. 1653–54), one of three paintings by the artist in the exhibition, demonstrates his careful depiction of a small interior space and the effects of natural light rendered with broad, fluid brushstrokes. The representation of a scholar reading, related to Leiden’s identity as a university city, was one of Dou’s favored subjects 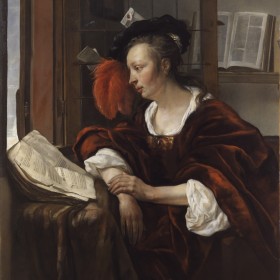 About The Leiden Collection

Founded by Thomas S. Kaplan and Daphne Recanati Kaplan, The Leiden Collection is comprised of more than 250 paintings from the Dutch Golden Age. The Collection features rarities by some of the greatest artistic innovators of the seventeenth century, including Johannes Vermeer, Frans Hals and Jan Steen, along with their peers, competitors and followers. Named for Rembrandt’s birthplace, The Leiden Collection features eleven Rembrandt paintings and two drawings that span his career, including three of his earliest known works from the series “Allegory of the Senses.” In addition to the works by Rembrandt, the Collection encompasses the broadest range of masterworks of his many pupils, including Carel Fabritius, Ferdinand Bol, Govert Flinck, Gerrit Dou, Aert de Gelder, Jan Lievens (Rembrandt’s studio mate) and Pieter Lastman (Rembrandt and Lievens’ mutual teacher). The Leiden Collection holds one of the largest and most extensive representations of Rembrandt and the Rembrandt School in private hands; the number of Rembrandts in the Collection matches or exceeds those of all but a few national museums. By focusing on portraits, history paintings, and genre scenes, the artwork in the Collection brings the everyday world of the 1600s to life. Since its creation, The Leiden Collection has prided itself on sharing its artworks with museums across the globe for long-term loans and special exhibitions and, in doing so, has become the art world’s singular “lending library” of seventeenth-century art.

About The Clark Institute

The Clark Art Institute, located in the Berkshires of western Massachusetts, is one of a small number of institutions globally that is both an art museum and a center for research, critical discussion, and higher education in the visual arts. Opened in 1955, the Clark houses exceptional European and American paintings and sculpture, extensive collections of master prints and drawings, English silver, and early photography. Acting as convener through its Research and Academic Program, the Clark gathers an international community of scholars to participate in a lively program of conferences, colloquia, and workshops on topics of vital importance to the visual arts. The Clark library, consisting of more than 270,000 volumes, is one of the nation’s premier art history libraries. The Clark also houses and co-sponsors the Williams College Graduate Program in the History of Art.