An Interview with ‘The Paradise Suite’ Scenarist/Director Joost van Ginkel

When we found out which film will be the Dutch entry for the Academy Awards in the Best Foreign Language Film category this year, we thought it was time for a little Q&A with the Scenarist/Director of the film

When we found out which film will be the Dutch entry for the Academy Awards in the Best Foreign Language Film category this year, we thought it was time for a little Q&A with the Scenarist/Director of this film; Joost van Ginkel. 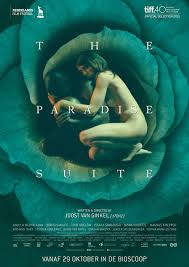 Q: Congratulations! How does is feel to have your film selected as the Dutch submission for the Academy Awards for the second time?!

Joost van Ginkel: Well, it feels awesome, it’s great! As far as I know, there were 28 films in the running to become the Dutch submission for this year’s Oscars. There is a commission of about 15 people who are all prominent members of the film industry. They  assessed all the films and have chosen “The Paradise Suite”! So yeah, it’s a real honor!

Q: We can imagine it’s been complete chaos for you this week…

J.: Well, yes… Currently, I’m working on the script for my upcoming film, but this week was more about interviews and ‘The Paradise Suite’ instead. There was not much time left for writing, to be honest!

Q: About Paradise Suite… Where was the idea for this film born?

J.: The film is about five stories that have all been with me for a long time. I’ve been writing scripts since I was 22 years old, but it the beginning the quality wasn’t really top of the bill. It wasn’t that good at all actually, and personally I feel that’s because to become a good scenarist, you have to have a lot of experience in writing. So, in all those years, a lot of the stories feature in the film were written.

I think the first time the actual idea for this film popped into my head was when I met a documentary maker who was a refugee from Bosnia, and started to film a documentary about Bosnian refugees with him. At the time, I was working in Den Bosch at a local broadcasting studio, and he just stepped in and told us he wanted to make this documentary. And that’s what we did; I worked for him as a cameraman at the time. The experience really opened my eyes to all the misery there is in this world, something which I had never experienced so evidently before. This was a real wake-up call for me. I learned a lot from the Bosnian director, and since I was still writing my own scenarios at that time, it influenced those stories.

Later, I was working in the Amsterdam harbor where I met many immigrants from all over Europe and beyond. Our job was to park cars, and every day we would sit in a van that brought us to the parking lot. What intrigued me was that I was more or less the only Dutch person in this van, except for the driver. The prospect of a career for almost all my other colleagues wasn’t that great, and this experience taught me a lot about the differences that exist in the world.

Q: Are the characters in ‘The Paradise Suite’ based on people you’ve met during your life?

J.: No, the characters in the film are completely fictive. However, all the people I met during for example this job in the harbor, have inspired me, definitely.

Q: The film is a co-production between several foreign companies; did these cultural differences effect the production in any kind of way?

J.: During shooting ‘The Paradise Suite’ we worked with a Swedish sound designer and a Swedish cameraman. I noticed that the Swedish are very professional and everything they do, they do down to the last detail. They do this mostly in silence, they  are very calm and professional, but I did appreciate that, and their technical skills are awesome. The Bulgarian co-workers were extremely enthusiastic and very eager to be part of this production. However, where the Swedish were extremely into details, the Bulgarian were slightly more disorganized, compared to Dutch standards. In the end, we found a compromise between all the skills and working norm  of these different cultures and we experienced a wonderful collaboration.

Q: In another interview with you we read about you and your thoughts about perfection and imperfection. In your opinion, it is impossible for human beings to be totally perfect. Would you like to tell us something about your own imperfections?

J.: Haha, that’s one of the most original questions of this week! How much time can I get for this?

I would qualify myself as an impatient person, but I’m not sure whether other people around me experience this in the same way. For example, when I’m on set explaining something to my co-workers, I expect their full attention. When I feel that people don’t listen when it’s required, I become a little bit bummed out. But full attention is required for a good collaboration, in my opinion!

Q: Joost, thank you for your time and patience ;-)! Good luck in the following weeks and we hope to see you on the red carpet at the Academy Awards!