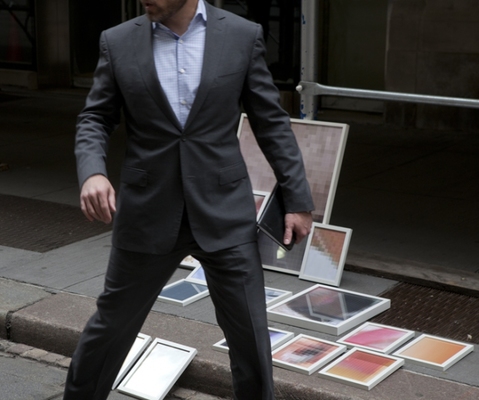 On March 18, 6.30pm Terike Haapoja and Dutch artist Anouk Kruithof will give a lecture at ISCP. Anouk Kruithof will discuss two of her most recent projects: Pixel-stress and Every Thing is Wave which were initiated during her first ISCP residency in March and April of 2013. Both projects address troubling aspects of contemporary Western culture: surveillance technology, the financial crisis, and power structures as well as more general existential issues of modern life including stress, pressure, dreams, social status, feelings of alienation resulting from technological development, and insanity.

On the 18th of April, 2013, Anouk Kruithof and two assistants went to Wall Street in New York City and built a temporary installation of 14 framed prints of different sizes on the edge of the city’s pavement. The prints looked like pixelated monochromes, but were in fact illustrations blown up to a maximum size (3200% in Photoshop) of images found by using google searching the word stress. Anouk Kruithof asked pedestrians to look at the installation and then had converstations about the pixelated monochromes, the meaning of this project and the potential interpretations of the work. Kruithof asked the people involved if they would like to buy a print, both engaging a commercial gesture and condemning the scarcity of the city dwellers encounterings. She sold 8 of the 14 prints bought by 7 participants when the day’s rain warded off further efforts. Kruithof was not allowed to conduct monetary transactions, so that once a participant told her a price for the print, she actually gave it for free, thus creating an imaginary sale transaction.

Every Thing is Wave

New York City is a universe of paradoxes. Observations from this metropolis, where Anouk Kruithof resided for extended periods within the last years, are the basis of the project Every Thing is Wave. Anouk Kruithof uses gentle irony and changing perspectives to shed light on the psycho-social state in which New York currently is. A state of which the dynamics of power, with as a result the absurdity of the contemporary stress/drive society, are depicted in an opaque and poetical language.

Contradictions provide freedom and cause productivity, which creates an endless wave of movement. Reality is never to completely be understood, which makes it necessary to embrace contradictions. This creates an openness which opens the door of contemplation.

Everyone who moves to New York needs to learn his way by trial and error. Because of the toughness of the city one is quickly taught to transform every form of negativity to its opposite. This generated the perseverance, force and drive of the people in New York. The stress driven city is overflowing with energy. The constant stream of impulses also stimulates mental craziness. The grey area between these two examples is what fascinates Anouk Kruithof profoundly.