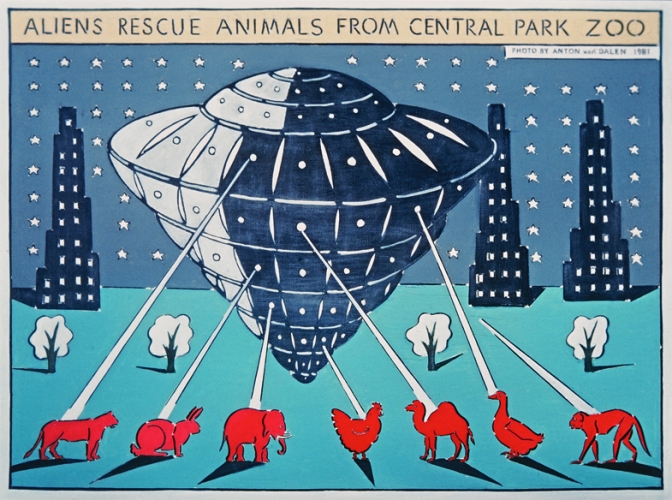 From May 18 until June 12, Sargent's Daughters presents "Inside Out, Home and Place:" a solo exhibition by Anton van Dalen.

Through June 19, Anton van Dalen is featured in two solo exhibitions in New York City. From May 18 until June 12, Sargent’s Daughters presents “Inside Out, Home and Place,” while Romeo hosts “The Devil’s Veil” from May 15 until June 19.

Inside Out, Home and Place

This exhibition is a homecoming of sorts for van Dalen, a presentation of works in the very neighborhood that has served as his longtime source of inspiration, and in which he continues to live and work today. Beginning his career as an artist playing the role of passive observer, van Dalen quietly captured the rapidly changing scene in the East Village, depicting the transformation of the people, cars, and storefronts that populated Avenue A as the neighborhood’s immigrant populations shifted and the East Village gentrified into a barely recognizable version of its earlier form. Through his work, van Dalen at once captured the sadness, tension, and vibrancy of the 70s and 80s, and the politics, commercialization, and nostalgia for a bygone era in the decades that followed. 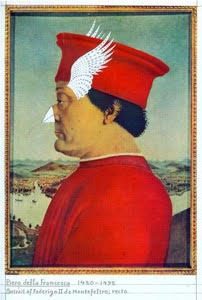 “Inside Out, Home and Place” will bring together a series of van Dalen’s works, providing a meditation on his longstanding interest in the clash between nature and technology, capitalism and humanity, and the way in which one’s sense of home and place in the world can be an ever-shifting construction due to external and often uncontrollable circumstances. The exhibition will feature his black and white animated 1965 film Flowers in my Eye, which features the imagery that has informed much of his practice.

Set to Mozart’s “The Magic Flute,” which traces the evolution of humankind from chaos to enlightenment, “Flowers in my Eye” unfolds through organic drawings that mirror this trajectory, though offers a more ambiguous assessment as to the ultimate enlightenment of humanity, suggesting instead that nature may be of a higher order.  The exhibition at Sargent’s Daughters will feature works that span the arc of van Dalen’s career, including his seminal paintings from the 1980s depicting eerie encounters with science, technology, and nature; a large-scale sculptural work that will contain live pigeons, and a body of recent collage works.

The exhibition will also feature a body of van Dalen’s recent collage work, Museum Birds. These works mimic the style of Perugino’s Renaissance portraits, but here cast human figures sitting for portraits embellished with bird wings and beaks. The works offer a humorous reinterpretation of great art and the classical masters, caricaturing the notion of an enduring legacy, and infusing them with the notion of mutability that informs so much of van Dalen’s practice. Throughout the exhibition, van Dalen will hang abstract, hand-made borders featuring natural motifs that will frame the works, creating a unified presence between the works and infusing the exhibition with a sense of place.

This story starts with a man—Anton van Dalen. His past: Amsterdam—war, education, immigration. New York City. An artist, now 77 years-old. 45 years spent living on Avenue A and 11st St. Here, you can see his home, in miniature, hand-made from paper and cardboard. His body is here too, in miniature, made from cardboard, flying his pigeons on his paper roof. Downtown Manhattan extending into infinite space. 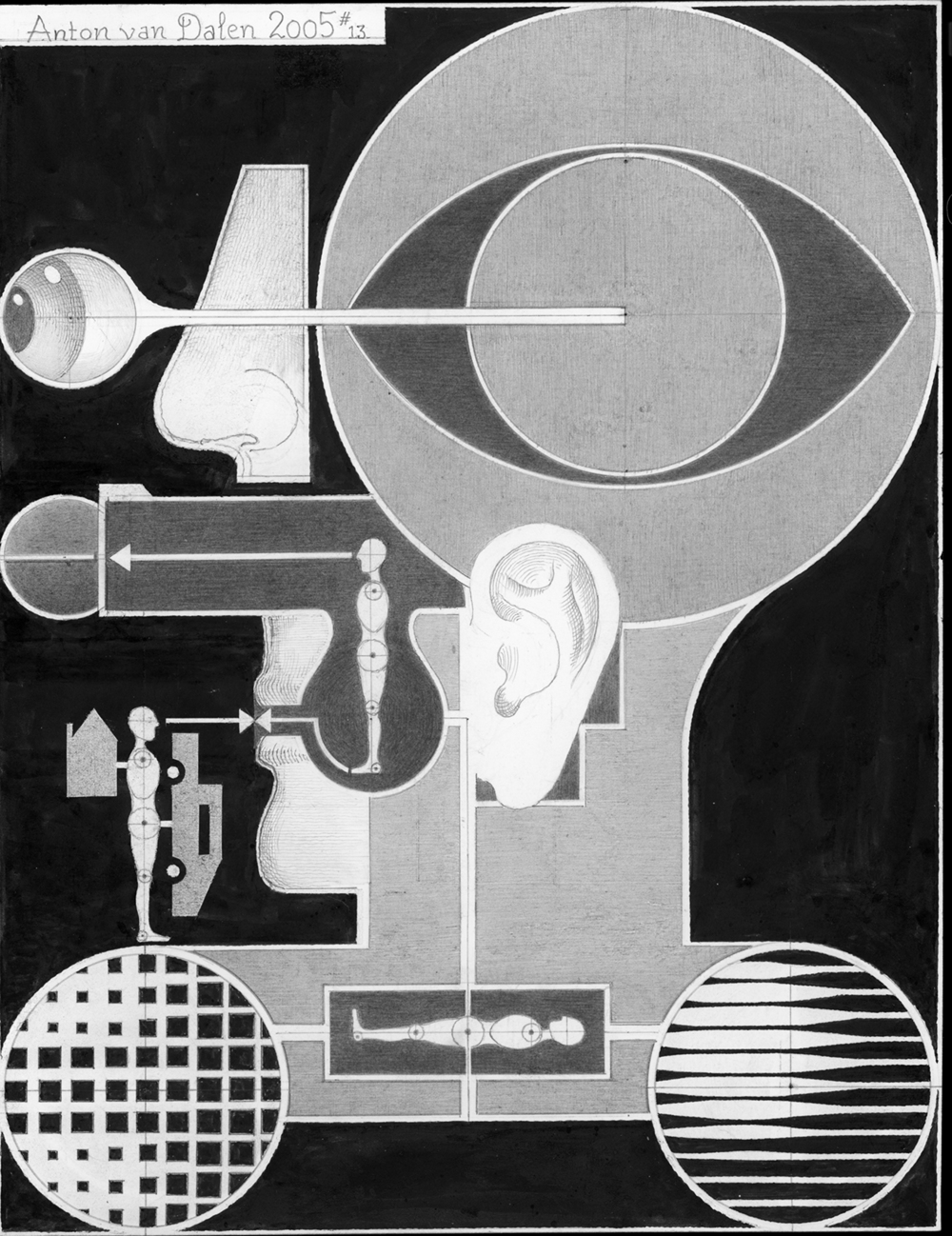 Like Hopper or van Gogh or Bearden, van Dalen was an observer of the world around him, documenting and internalizing. Not a beatnik, not a hippy.

Then, through this, elements start to shift in his work, reality starts to slip. The devils veil, crystalline, falls through the gaps of his position as observer, his position of separation. Ideas come flooding in, many of them difficult to swallow. A drawing of four dogs, each almost identical to the other. Implicative of pop art in their repetition but each devotedly hand drawn. A dog will lick his wounds to heal, but often the dog finds it hard to stop… society as cyclical, the abuser fuses with the abused, a dark inspiration.

What happens when the body becomes the world around it? We are consumed by the symbols of our desire. A true manifestation of the grotesque—human meets machine, they are level with one another, the hinge between left invisible, indecipherable. The desire for the object is an object itself, a thing that moves, tastes, feels, sees, fucks. A heaving humanoid body, laden with its weight of the world, dragging itself through the void, through the thick mud of ages to come say hello.

The digestive tract of cultural consciousness—this soul, glowing in LED. Anton draws this collective self, this version of ourselves we might perhaps be disgusted by—this art we might be disgusted by—rendering it with beautiful intimacy.

Anton van Dalen was born in Amstelveen, Holland and lives in New York City. He is represented by P·P·O·W Gallery in New York. He has been included in group exhibitions at notable institutions including the: Whitney Museum of American Art, New York; New Museum, New York; Contemporary Art Center, Cincinnati, and the New York Historical Society. He has also been the subject of solo exhibitions at: Temple Gallery, Tyler School of Art, Temple University, Philadelphia; University Gallery, University of Massachusetts, Amherst; and Exit Art, New York. Avenue A Cut-Out Theatre has toured since 1995 both nationally and internationally, and has been shown at numerous institutions including The Drawing Center, the Museum of Modern Art, and The New York Historical Society. His work will be featured simultaneously in a solo exhibition at Romeo Gallery.

Sargent’s Daughters takes its name from the painter John Singer Sargent, who was an innovator working in a traditional medium.  Accordingly, the gallery interest is in artists whose work combines the same qualities of tradition and cutting edge. In addition to exhibitions by represented gallery artists, Sargent’s Daughters creates collaborations as a platform for exploring new conversations within a wider context of galleries, artists and objects.

Romeo is a new exhibition space on the Lower East of Side in New York City. The gallery is dedicated to drawings & works on paper.