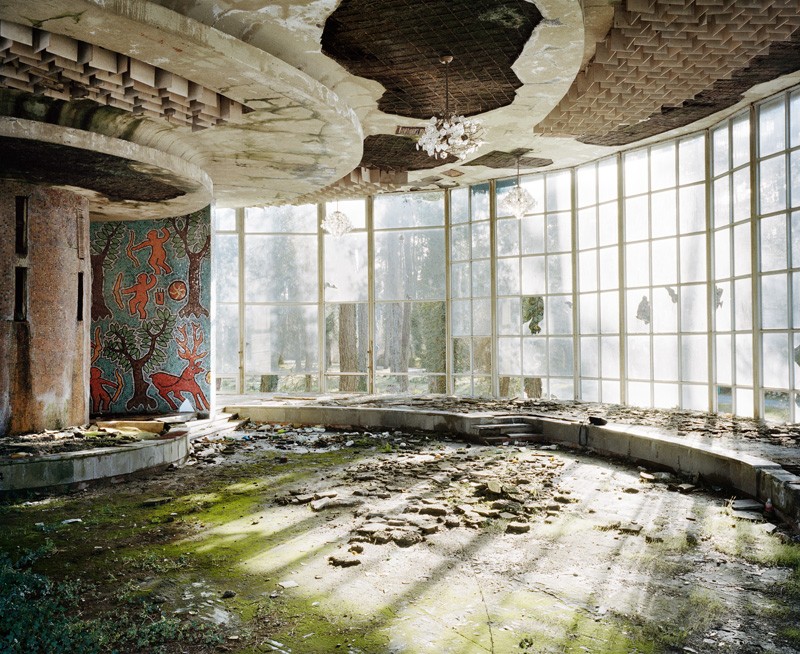 This limited-edition photograph by Rob Hornstra is an image from The Sochi Project, a project by journalist Arnold van Bruggen and Hornstra telling the story of Sochi, Russia, site of the currently ongoing Winter Olympic Games.

When Hornstra and van Bruggen first visited Abkhazia in 2009, they came across the seaside resort town Pitsunda. Amongst the ramshackle high-rise hotels and pine trees sat an abandoned ballroom, epitomizing the romance of decay; Hornstra photographed it. During their visit, the mayor of the town assured Hornstra and van Bruggen that the upcoming Sochi Olympics would put Abkhazia on the tourism map. In 2013, the pair revisited the area, and Hornstra rephotographed the ballroom. Hornstra’s photograph, Pitsunda, Abkhazia, 2013, shows the ballroom unchanged, despite developments in Sochi.

They have returned repeatedly to this region as committed practitioners of “slow journalism” and documented the area, including parts of neighboring Abkhazia—a disputed territory and one-time vacation hot spot, now riddled with conflict. Check out Hornstra’s recent interview on WNYC’s The Brian Lehrer Show to hear more about his and van Bruggen’s work.

Rob Hornstra (born in Born, the Netherlands, 1975) is a photographer and self-publisher of slow-form documentary work. In addition to his work on The Sochi Project, he is also the founder and former artistic director of FOTODOK, Utrecht, the Netherlands. Hornstra is represented by Flatland Gallery, Amsterdam.