The location will be announced 24 hours before the show

On July 1st, Armin van Buuren will perform on a yet unknown secret location. The location of the event will be announced 24 hours before the show! So make sure to track this wordly, famous DJ and get your tickets while they’re still available. For the Armin van Buuren BKWRHS showcase, attendees can anticipate an indoor – outdoor event with outside doors opening at 7 pm.

The Armada Music co-founder and creator of A State of Trance (ASOT) will deliver his first warehouse event since taking over Brooklyn’s Tobacco Warehouse for back-to-back days in July 2006. Marking nearly ten years to the date, the trance titan makes his Brooklyn warehouse return with BKWRHS, presented by RPM Presents & David Lewis Productions.In May, Armin released the latest installment in his annual ASOT compilation series, A State of Trance 2016. Found on ASOT 2016 are new tracks from some of trance music’s finest producers, including new productions from Armin under his moniker Gaia (“Inyathi”) and Rising Star alias featuring Betsie Larkin (“Again”). 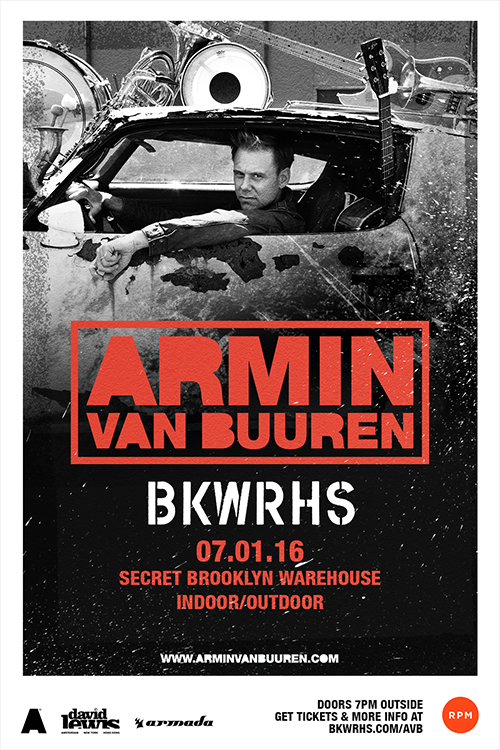 For more than 15 years, the Grammy nominated Dutchman has been living to the rhythm of his own, international success. His 5 times number one position in the critically acclaimed DJ Mag’s Top 100 poll has been the result of his loyalty to fans, his creativity in the studio, the perseverance with which he hosts his weekly radio show A State of Trance and the energy he transcends to the crowds in front of him. Despite the heavy pressure that comes along with being one of the world’s most popular DJ, Armin has always kept his focus on the music. And that’s exactly what keeps him going.
A State of Trance. Armin discovered a passion for dance music by listening to mix-tapes and radio shows, and taught himself how to create his own. 20 years later, his very own radio show A State of Trance has grown out to legendary heights. Nowadays, 20 million listeners tune into his 2 hour selection of trance and progressive, every week. A State of Trance 650, the 13th birthday of the show, is being celebrated with the ‘New Horizons’ world tour, landing shows in cities such as Almaty, Yekaterinburg, Utrecht, Santiago, Buenos Aires, Kuala Lumpur, Jakarta, Miami and more. A great deal of these show will be broadcast live, so that none of the ASOT fans will have to miss out on anything.