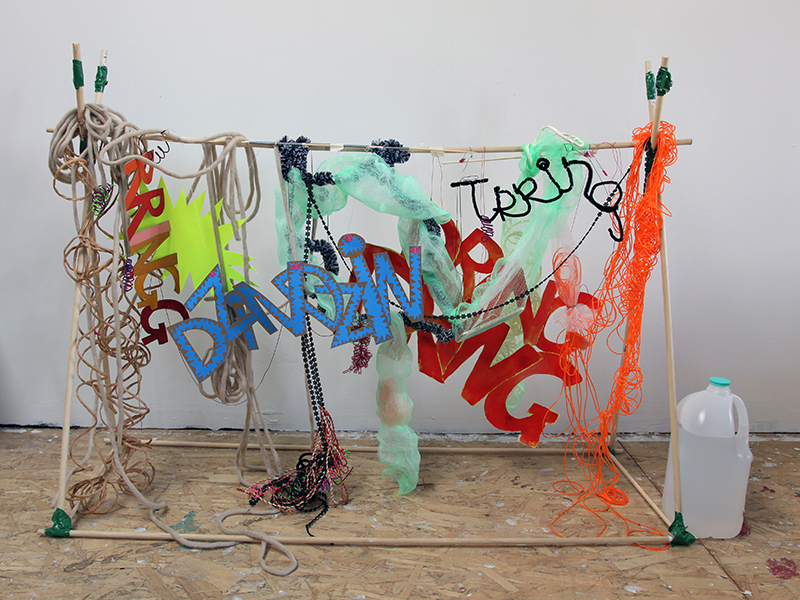 April 9 is the start of the group exhibition: Artistic Interpretations Of The Cold War.

From the 9th of April until the 12th of August, The Wende Museum, in Culver City, California, United States presents the group exhibition Artistic Interpretations of the Cold War. Dutch artists Richtje Reinsma and Daphne Rosenthal were artists-in-residence at The Wende Museum from May to June 2015. Under the name of artist collective DRR, a playful reference to their names and to the German Democratic Republic (Deutsche Demokratische Republik or DDR in German), they used everyday objects from the museum’s collection for their project Free Things, which was generously supported by the Mondriaan Fonds, which examines the various ways in which ordinary objects and technologies help shape our imagination, behavior, relationships and memories. For this exhibition their display consists of three drawings, a sculpture and a video referencing East Bloc telephones. As appliances, telephones connect the private, public, and political spheres, embedding every home, office, and institution in the same infrastructure controlled by the state. How to begin to imagine what kind of information has passed through those phones? DRR tries to get as close as possible to the phones fallen silent in their new museum-based environment, scrutinizing the scratched and worn surfaces of their casings, peeping into their mechanical intestines and supplying them with symbolic sound using ‘loud’ drawings and cut-out onomatopoeias (textual sound-imitations). DRR tries to evoke what the unknown mouths and ears may have been sharing and hiding while handling them.

During their artist-in-residence stay Richtje and Daphne wrote for the website ‘Mister Motley’, which is a visual arts magazine. Read their blogs here.

Richtje creates drawings, images, installations, performances and video, and writes about the art of film, and video. Because of her curiosity on how we perceive things, this is a frequently integrated subject in her art. How do you determine and value what you see? And what effect do images, codes and visuals aspects have on you? Richtje Reinsma explores the expectations that these certain forms, objects, materials and spaces could cause, by disrupting them.

Daphne works mainly in the field of experimental film, sculpture and animation and currently lives in Amsterdam and Los Angeles. Her work deals with seduction of the senses and how we are coded to project our longings and beliefs onto moving abstract textures and shapes. In her latest films, The forgetting of objects and Meanwhile, looking elsewhere, a camera navigates through the chaotic sculptural landscapes she builds with fabrics, beads and other haberdashery. During the filming she performs tiny interactions with the colourful mess, such as touching or pulling. You won’t see her hands, only how the materials respond. Daphne’s work has been shown at Museo Universitario del Chopo, Mexico City; Mediamatic, Amsterdam; Quartier 21, Vienna; Heden, Den Haag. She also has a background in documentary making. Her documentary Het Rietveld Schröderhuis has been screened at the Tate Modern, the Centre Pompidou, the Vitra Design Museum, and is currently on display at the information center of the Rietveld Schröderhuis.

About The Wende Museum

The mission of the Wende Museum is to preserve Cold War art, culture, and history from the Soviet Bloc countries, inspire a broad understanding of the period, and explore its enduring legacy.Named for the Wende (pronounced “venda”), a German word meaning “turning point” or “change” that has come to describe the transformative period leading up to and following the fall of the Berlin Wall in 1989, the Wende Museum: