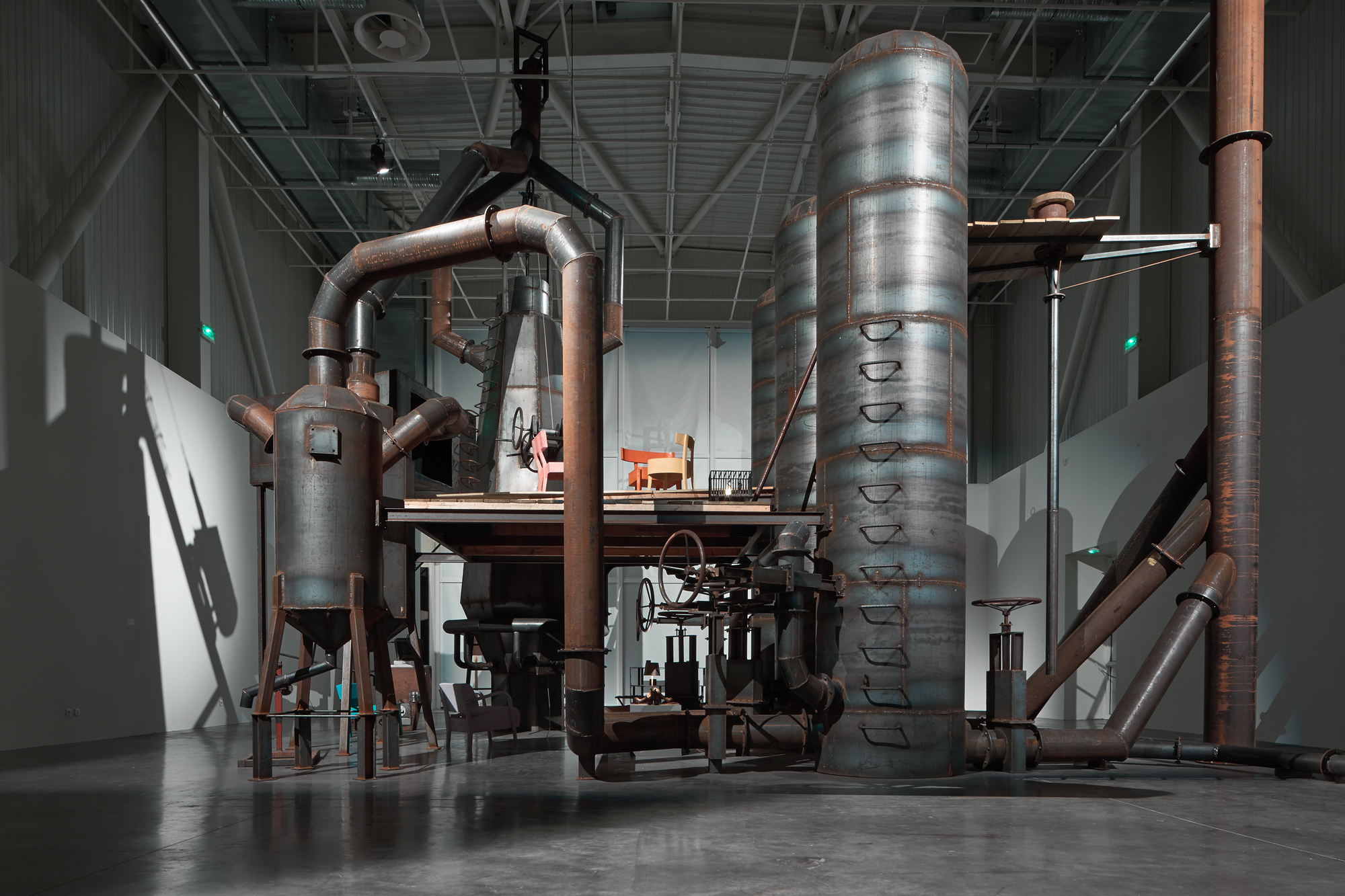 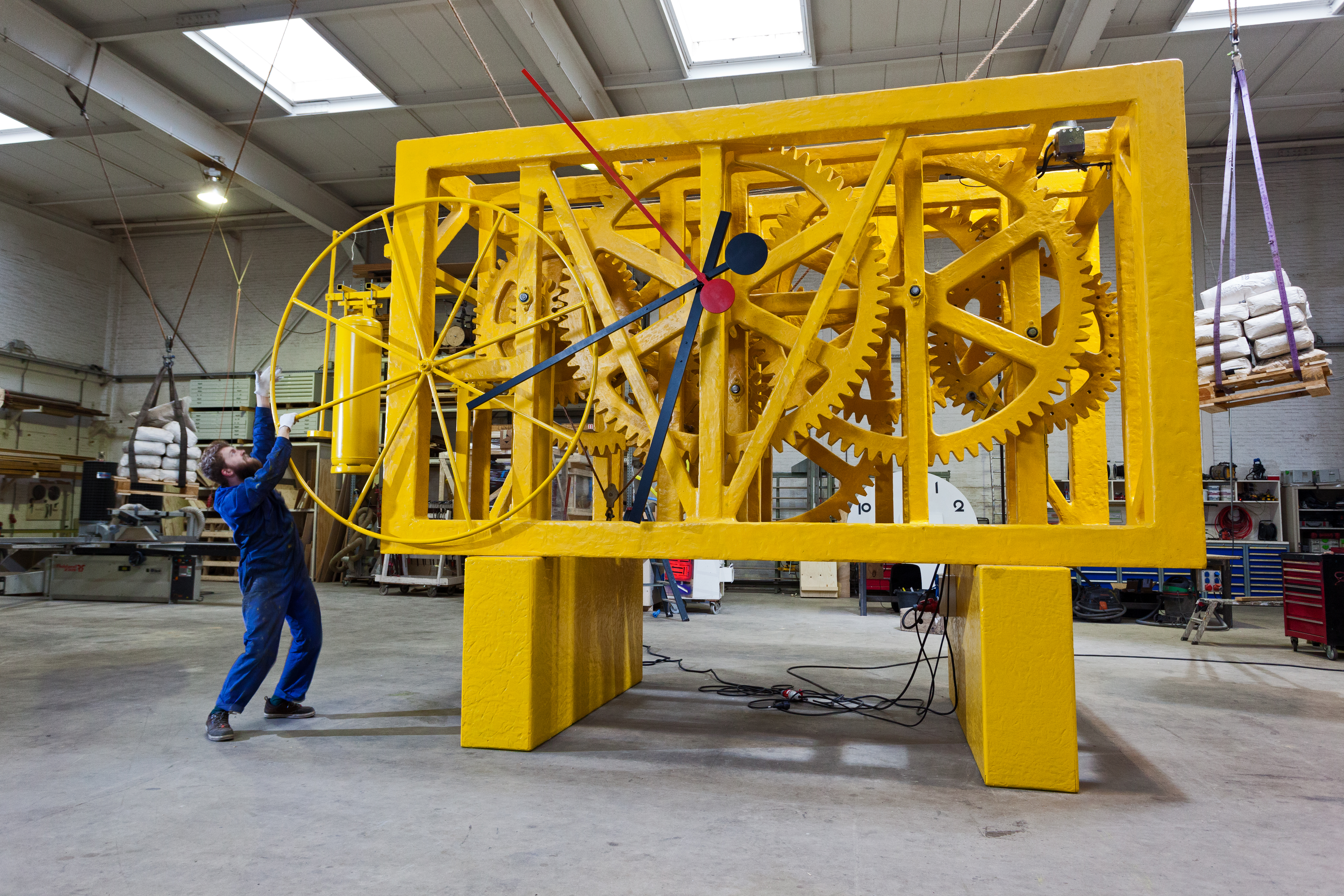 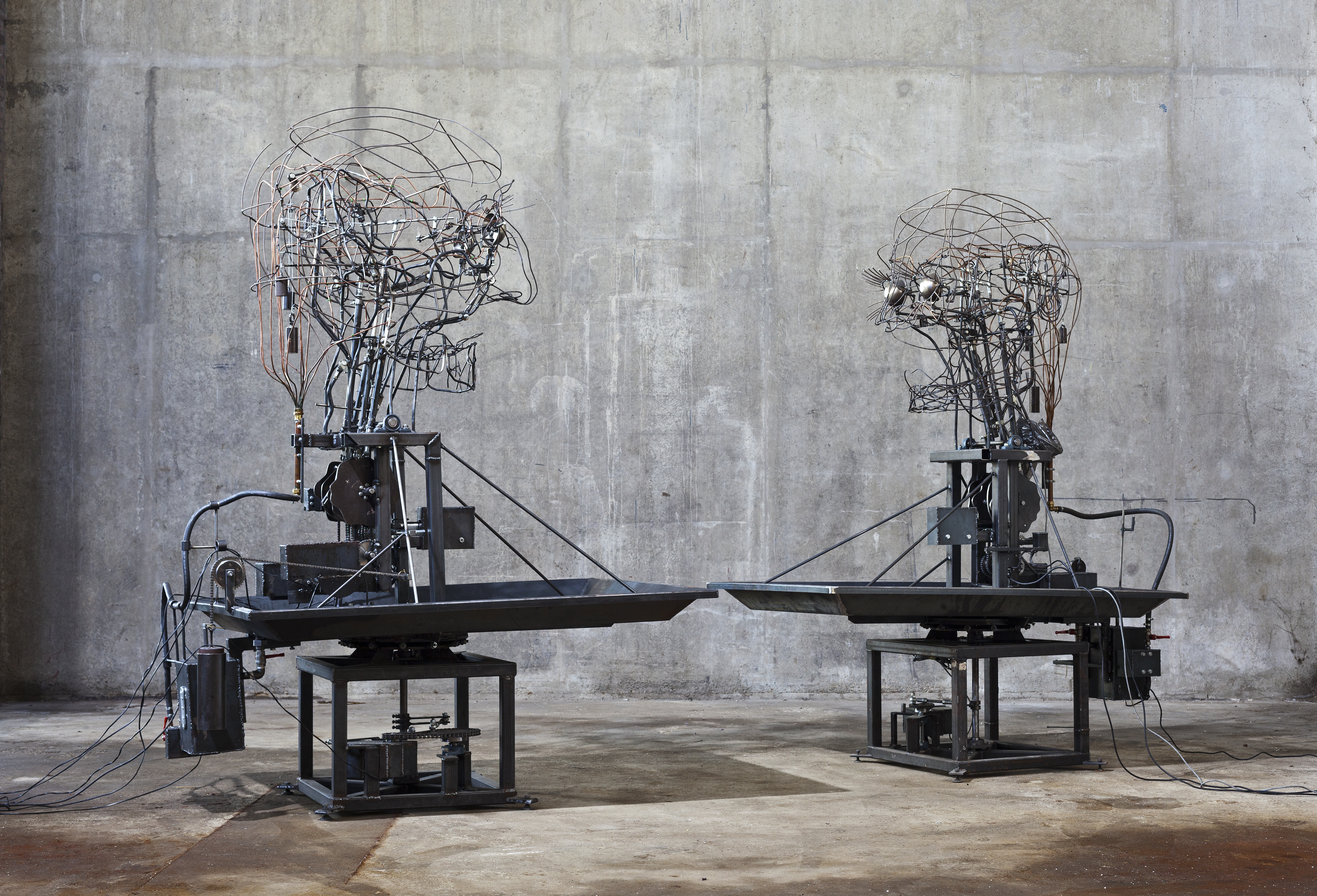 The mechanical Turks (2015) </br> Courtesy and © of Atelier Van Lieshout 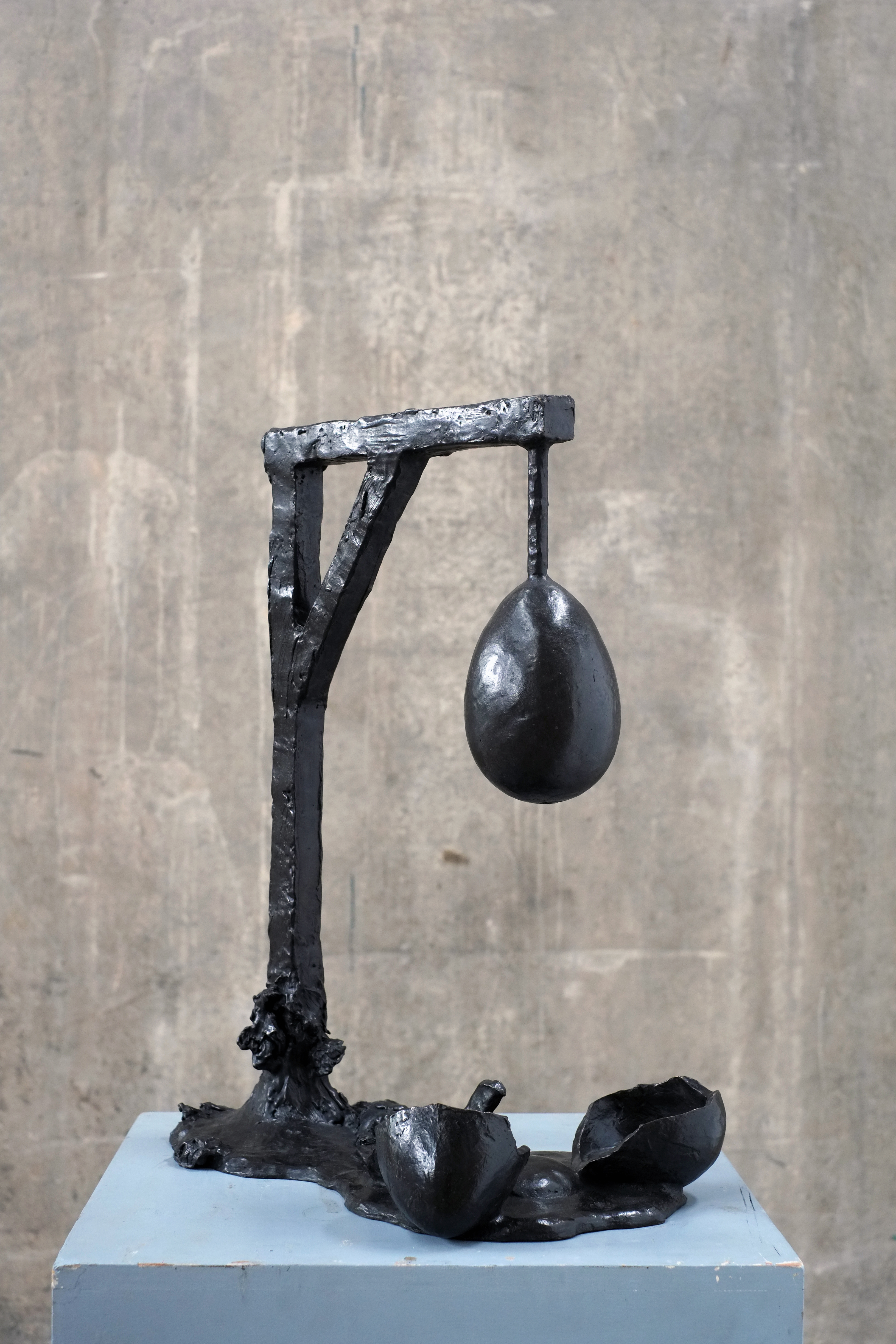 Update March 25: On Thursday March 28, 7 pm, Pioneer Works hosts a panel on the topic of economic progress and destruction on the occasion of the exhibition. Panelists are Paola Antonelli, Anwar Shaikh, Andrea Steves and Timothy Furstnau. More info and RSVP.

Over the past three decades, Atelier Van Lieshout has become known for radical, large-scale experiments in art, architecture, and design, which link the organization of labor, structures of power, and revolution to the end of the world’s resources and subsequent self-sufficiency. Decreeing his studio an atelier in 1995 to both undermine the artist-as-genius myth and place art and utility on equal footing, the studio has, among many other things, created an independent state in Rotterdam with its own constitution, currency, farm, weapons workshop, and distillery (AVL-Ville, 2001); a floating, reproductive health clinic offering free reproductive health care in international waters (A-Portable, 2001); and an insect farm for future food needs (Insect Farm, 2012).

For his largest-scale exhibition of work in the United States, The CryptoFuturist and The New Tribal Labyrinth, AVL brings together two ongoing bodies of work, among others, that give the exhibition its name. They transform Pioneer Works into an immersive installation of sculptures and industrial machines. Central to the artist’s New Tribal Labyrinth series is Blast Furnace (2013), an imposing, labyrinthine structure referencing the furnaces traditionally used to produce steel. The sculpture also contains domestic elements such as a kitchen, sleeping quarters, and toilets, an environment inhabited by an imaginary tribe of metalworkers, a “New Tribe” with a visceral desire to return to the beginning of industry, the origins of our culture, wealth, materials, and products. Setting the stage for the synthesis of man and machine, this tribe feeds off the heat, waste, and noise of their industrial utopia. Other works in this series literalize the union of the human and industrial through sculptural representations of sperm and reproductive organs doubling as lamps and furniture. They posit the human body as itself a kind of machine, endlessly procreating.

Works that are a part of AVL’s Crypto-Futurist series, meanwhile, take their name, in part, from the Greek kryptós—“hidden” or “secret,” as in a person covertly supporting a group, party, or belief. In this body of work, Van Lieshout revisits the Italian Futurists, who in the 20th century glorified new technologies, cities, and war. AVL finds in the Futurists a parallel to fascist tendencies we face today—genetics, robotics, big data—proposing a range of sculptural solutions to fundamental problems, like a machine that turns waste material into new food supplies, Food Reaktor (2013), or a DIY nuclear reactor, Nuclear Reactor (2016). Others, such as a hammer and sickle fashioned out of bronze, Hammer and Sickle (2016)—a symbol of the Russian Revolution—nods to the rise and fall of past political movements. A new work premiering at Pioneer Works, the Pendulum (2019), is a massive, mechanical clock powered by a swinging pendulum. It’s connected to a Mechanical Press (2019) that crushes objects daily beneath its ceiling-attached weight. The clock’s hands loudly tick, ominously counting down to the “end of everything” that ushers in the “beginning of everything,” a perpetual cycle of destruction and renewal characteristic of our constant search for utopia. The brutality of this process is viscerally exemplified by a series of 1,300-pound, crushing steel hammerblocks, displayed sculpturally on pedestals.

While Van Lieshout envisions utopian modalities for living, these can just as likely lead to a world of violence and extremism. Through exposing links between the past and the present, he lets the viewer play a game of nostalgia for bygone political theorems and movements.

Atelier Van Lieshout: The CryptoFuturist and The New Tribal Labyrinth is curated by Gabriel Florenz and Natalie Kovacs. 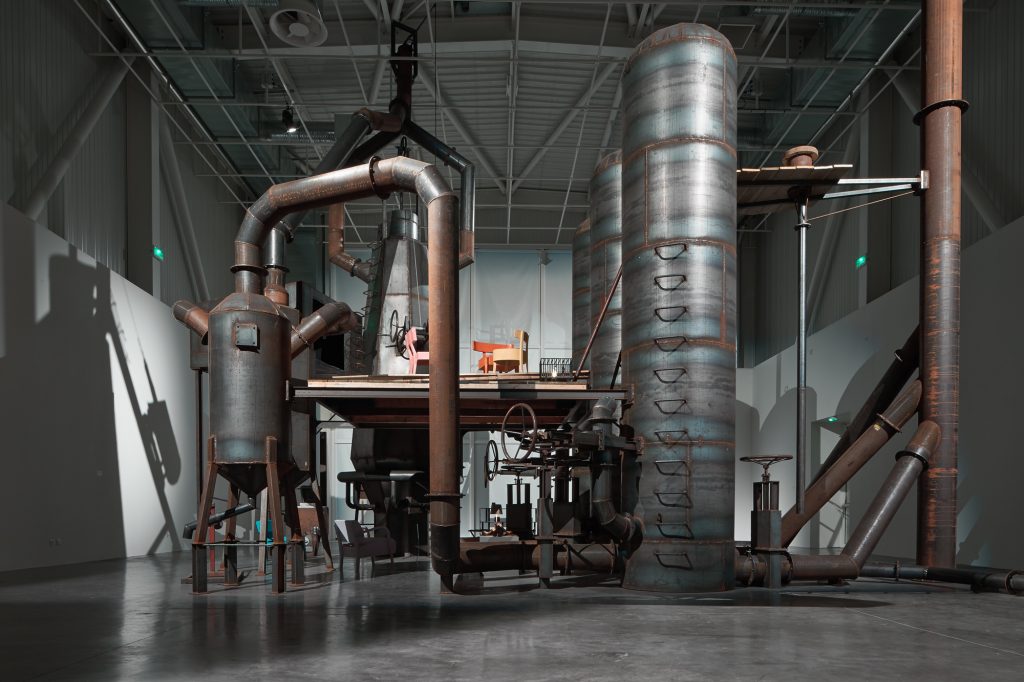 Atelier Van Lieshout: Blast Furnace (2013). The mechanical Turks are automatons that present opposing viewpoints around “constructivism” and “primitivism”; one longs for renewal, construction, technology and advancement, while the other wants to go back to the origins of our culture, the source of life, and the expressionistic, primitive lifestyle. Courtesy and © of Atelier Van Lieshout 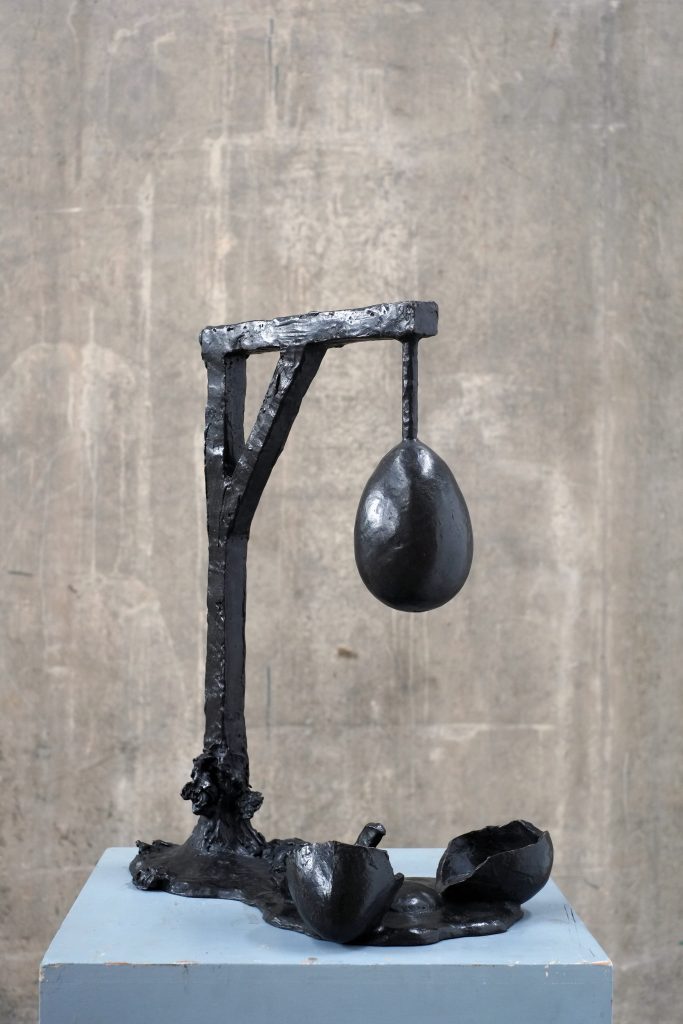 Perpetuum Mobile (2014) The centerpiece of New Tribal Labyrinth, and a metaphor for man and machine. The production cycle parallels our internal organs, reconnecting us to our raw material essence. Courtesy and © of Atelier Van Lieshout 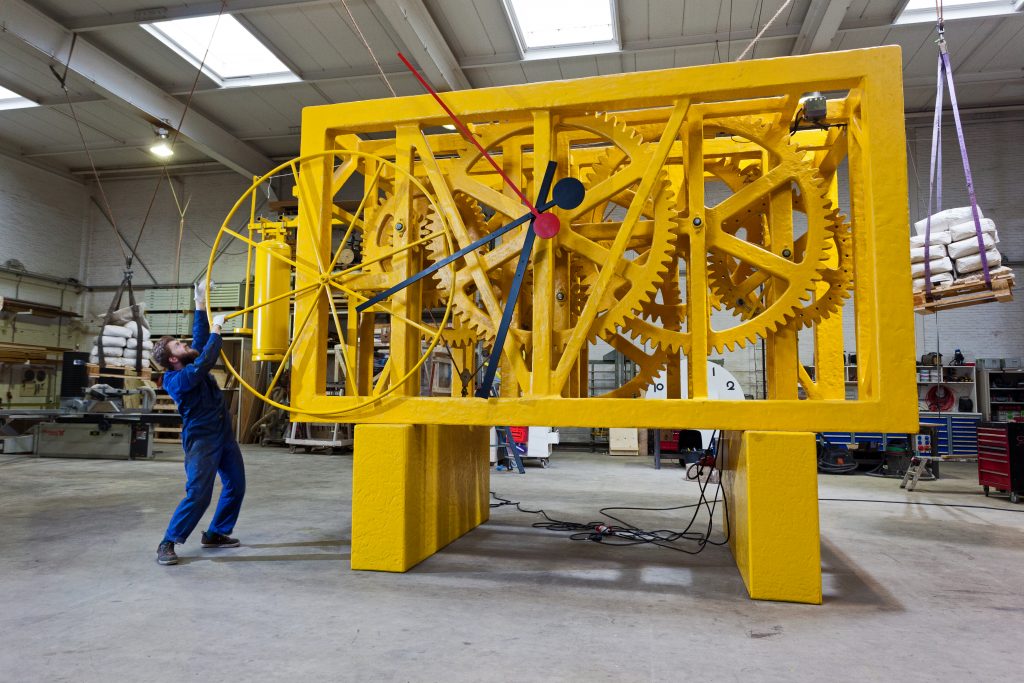 Pendulum (2019) Time is ticking, and every fifteen minutes the Pendulum’s gong is struck, announcing the end of the world, while every day at 5pm the clock activates the mechanical and hydraulic presses, which destroy the objects placed beneath them. The end is coming, faster and faster. Will we be ready for a new beginning? 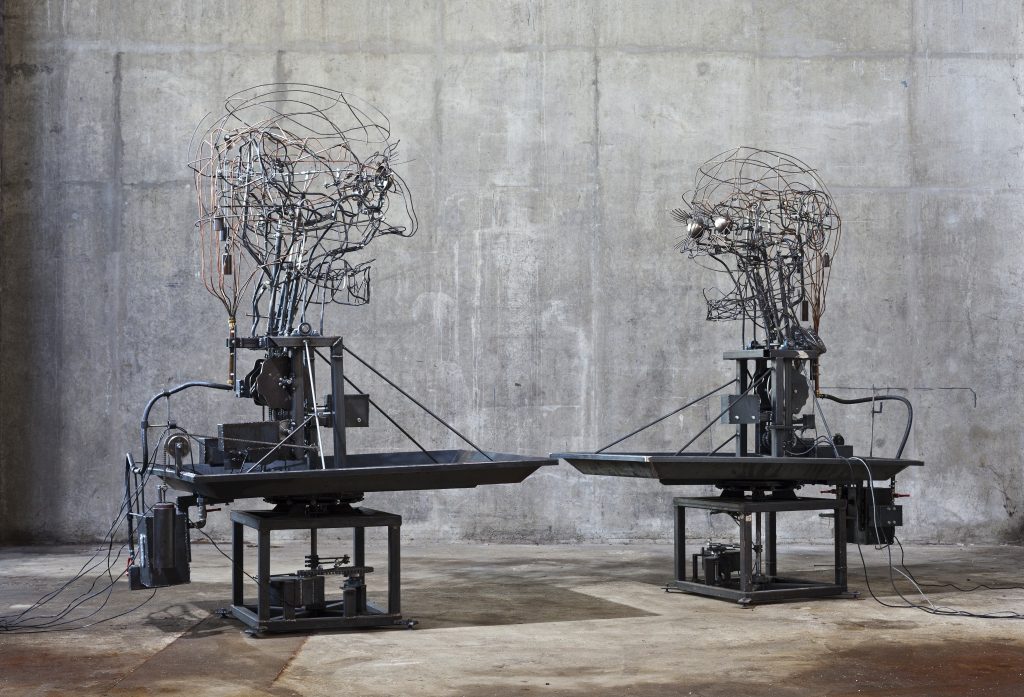 The mechanical Turks (2015) The mechanical Turks are automatons that present opposing viewpoints around “constructivism” and “primitivism”; one longs for renewal, construction, technology and advancement, while the other wants to go back to the origins of our culture, the source of life, and the expressionistic, primitive lifestyle. Courtesy and © of Atelier Van Lieshout

Sculptor, painter and visionary Joep Van Lieshout (b. 1963 in Ravenstein, Netherlands) was accepted to the Rotterdam Academy of the Arts at sixteen years of age, and has been working solely under the name Atelier Van Lieshout (AVL) since the studio’s founding in 1995. AVL has established a multidisciplinary practice that produces works on the borders between art, design, and architecture. Notable projects have included AVL-Ville (2001), an independent state in Rotterdam with its own constitution and currency; A-Portable (2001), a floating, reproductive health clinic offering abortions in international waters; Insect Farm (2012), an insect farm which addresses future food needs; and Domestikator(2015), a lodging-sculpture depicting a man and animal procreating, which was censored by the Louvre and subsequently displayed at the Centre Pompidou. Work by AVL has been exhibited at museums and galleries worldwide, and is in the collections of MoMA, New York; FNAC, Paris; Stedelijk Museum, Amsterdam; Prada Foundation, Milan; and Museum für Gegenwartskunst, Zürich.