New York based Dutch saxophonist and composer Ben van Gelder will perform at Smalls Jazz Club on October 17 and at the Jazz Gallery on October 22. Both venues are in New York City.

Ben van Gelder is in his mid-twenties, and is one of the new voices who has been getting a lot of attention on the New York scene. Born in 1988 in the Netherlands, Ben plays here with partners from his own generation. Most of them were born within the same year: four of the members of the quintet are the same age, and the fifth member has only just reached past his 30th birthday. The quintet’s instrumentation is unusual: alto saxophone, vibraphone, piano, bass, and drums. The group immediately wins the listener over with music that transmits the allure of surprise.

Van Gelder’s quintet partners are vibraphonist Peter Schlamb, pianist Sam Harris, bassist Rick Rosato, and drummer Craig Weinrib; they are all major talents on the New York scene; each has frequently appeared throughout the area performing with various groups. This particular band has been playing together for over four years. Despite its members’ unabashedly youthful presence, they already have considerable experience in putting forward their own concepts and compositions. They released their debut album, Frame of Reference, in 2011. The CD was highly praised, and like their second CD Reprise, it was recorded at the Sear Studio in New York. All About Jazz marveled that it was “hard to believe that ‘Frame of Reference’ is a debut album,” and praised ‘Reprise’ as “another strong release from an emerging young voice.” 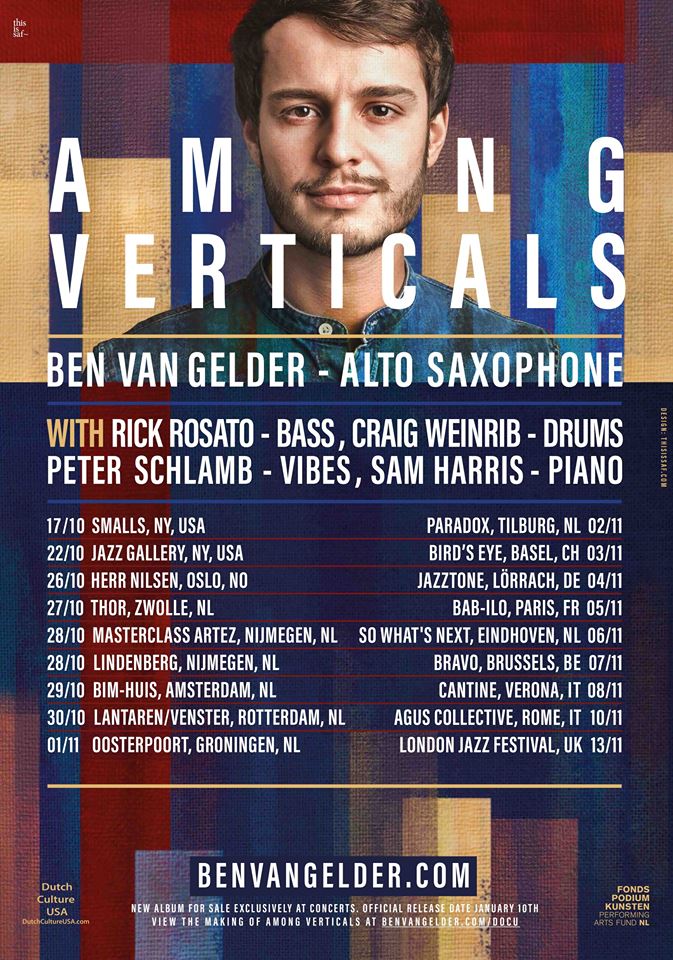 As the band shapes its original compositions, it projects a robust, yet shimmering wall of sound without abandoning the folk music origins of the blues. The quintet is transparently invested in community building—in creating a strong feeling in the room for members of the audience—and their music speaks to listeners of any age and background. The luminance of vibraphone and piano, backed by an energetic, textured rhythm section, offer a platform for improvisation and experimentation.

Despite his youthful age, Ben van Gelder is emerging as an important new voice on New York’s groundbreaking improvised music scene. Peers and critics alike praise him for his unique sound and originality as a composer and improviser. He performs all around the world in various settings and formations. Rooted in the jazz tradition, he creates music that is informed by a multitude of contemporary influences resulting in a sound that is lyrical, at times orchestral, but above all current. Ben comes from a Dutch family who loves music. His father owns a record store, his mother is a classically trained musician. Ben became involved in the jazz scene at an early age, was already a prize-winner as a student, and appeared at such prestigious jazz venues as the North Sea Jazz Festival. He studied in Amsterdam, and shortly thereafter landed in New York where he continued his schooling with the likes of Lee Konitz and Mark Turner while playing with such diverse major jazz players as Ari Hoenig and David Binney.