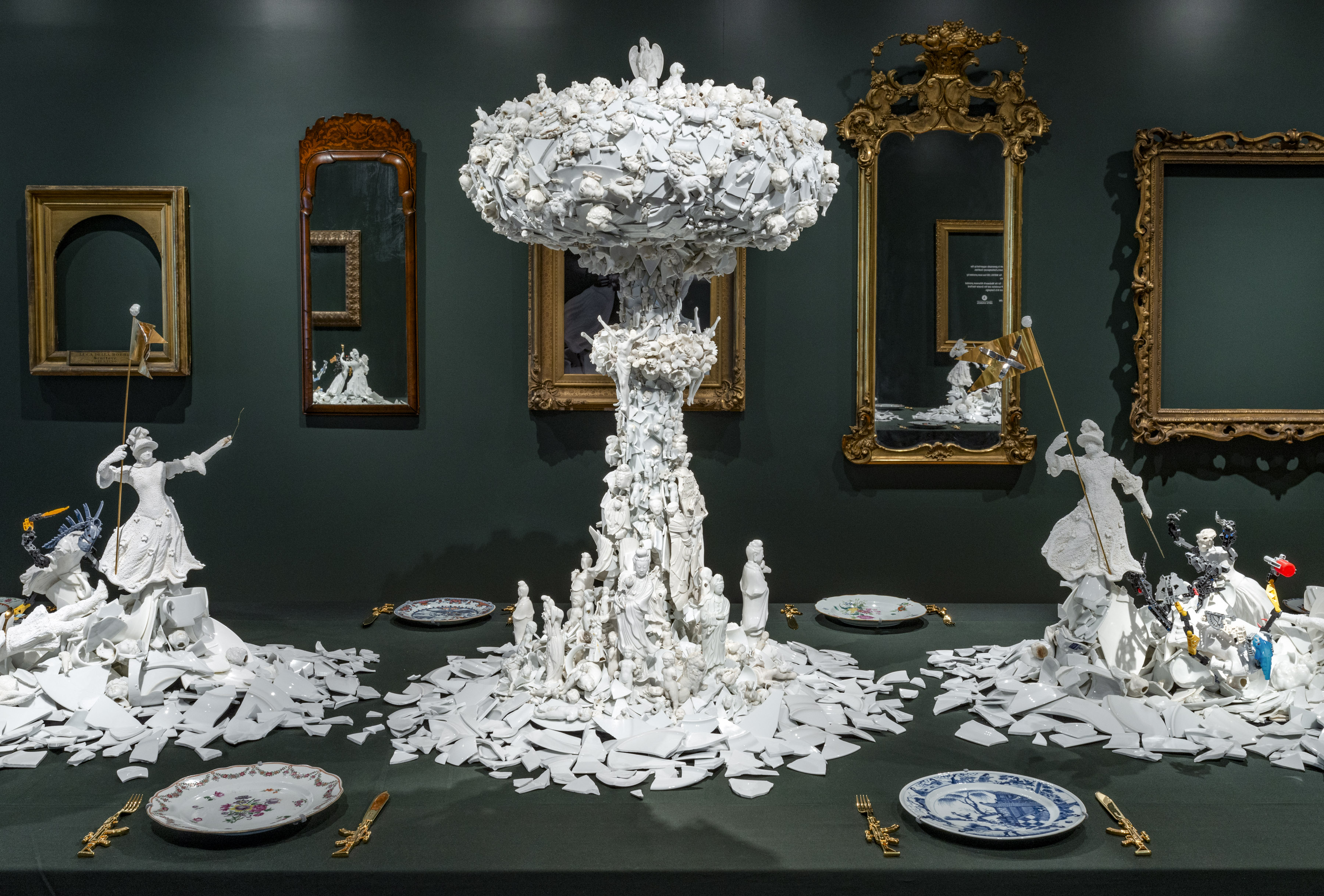 The 180th exhibition in the MATRIX-series named "War and Pieces" is open until Jan 6 in Hartford, CT

From October 4rd until January 6th, Bouke de Vries‘s “War and Pieces” will be exhibited as the 180th feature of the MATRIX-series of the Wadsworth Atheneum Museum of Art in Hartford, CT. 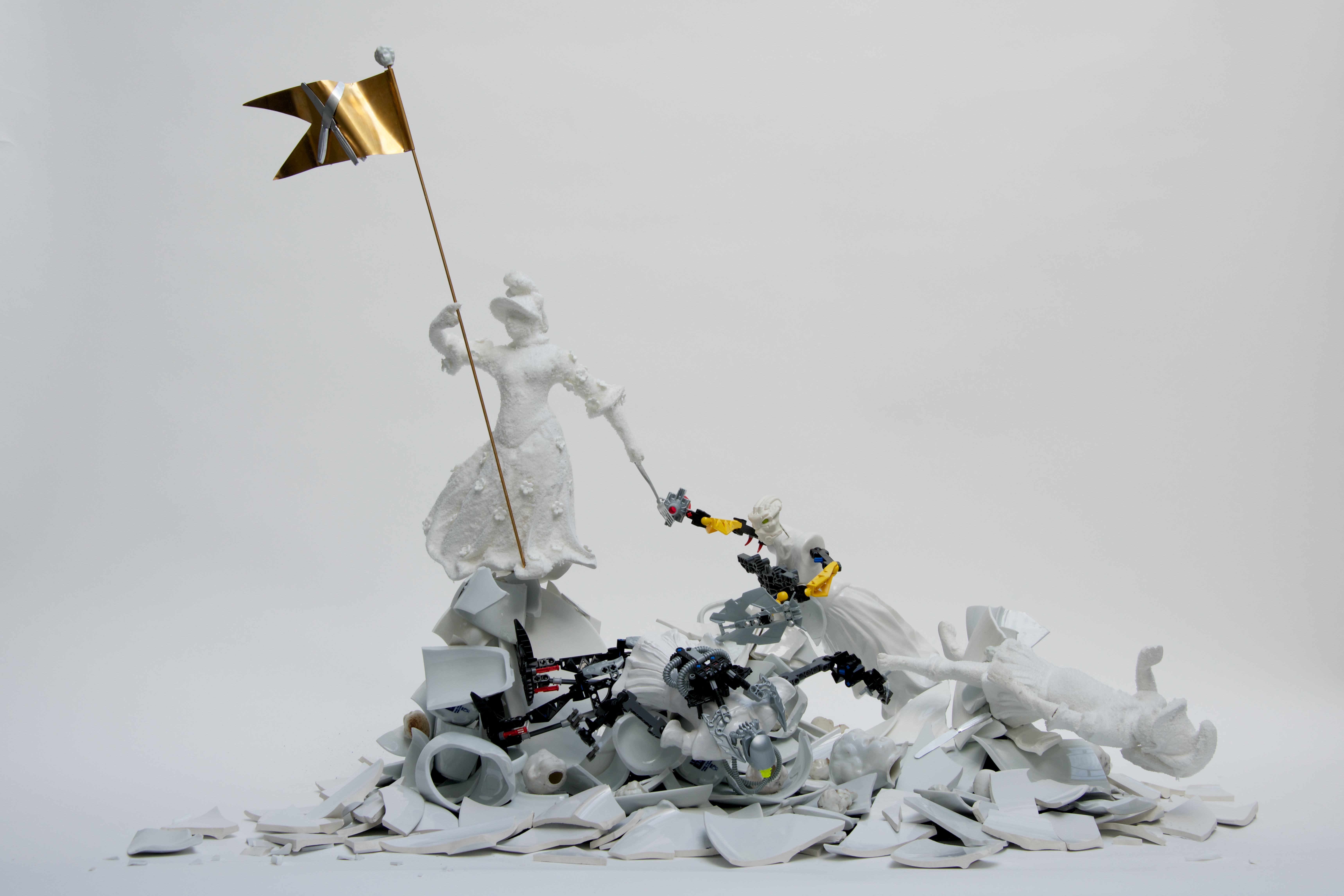 This is the first American showing of “War and Pieces,” a twenty-six-foot installation inspired by the sophisticated figural centerpieces that decorated 18th-century European banqueting tables. Such figures, first made of sugar and later made increasingly of porcelain, were displayed during the dessert course on special occasions and told stories or conveyed political messages. “War and Pieces” uses this mode of table culture to call attention to our current culture of waste and mass production. De Vries’s piece is also a commentary on the follies of war and its continuing impact on our lives.

“War and Pieces,” de Vries’ first large-scale installation, coopts the 18th and 19th-century tradition of holding a grand banquet on the eve of battle. His modern centerpiece is arranged around a mushroom cloud from a nuclear explosion whose force appears to have turned the entire table into a wasteland. Battles rage across the heap of porcelain shards, old and new, fought by myriad miniature figures with conventional arms. Jesus on the cross and the Chinese Buddhist goddess of compassion, Guanyin, watch over the death and destruction. Brightly-colored contemporary plastic toys—indestructible symbols of our own toxic times—contrast vividly with the pure white of the porcelain and sugar. 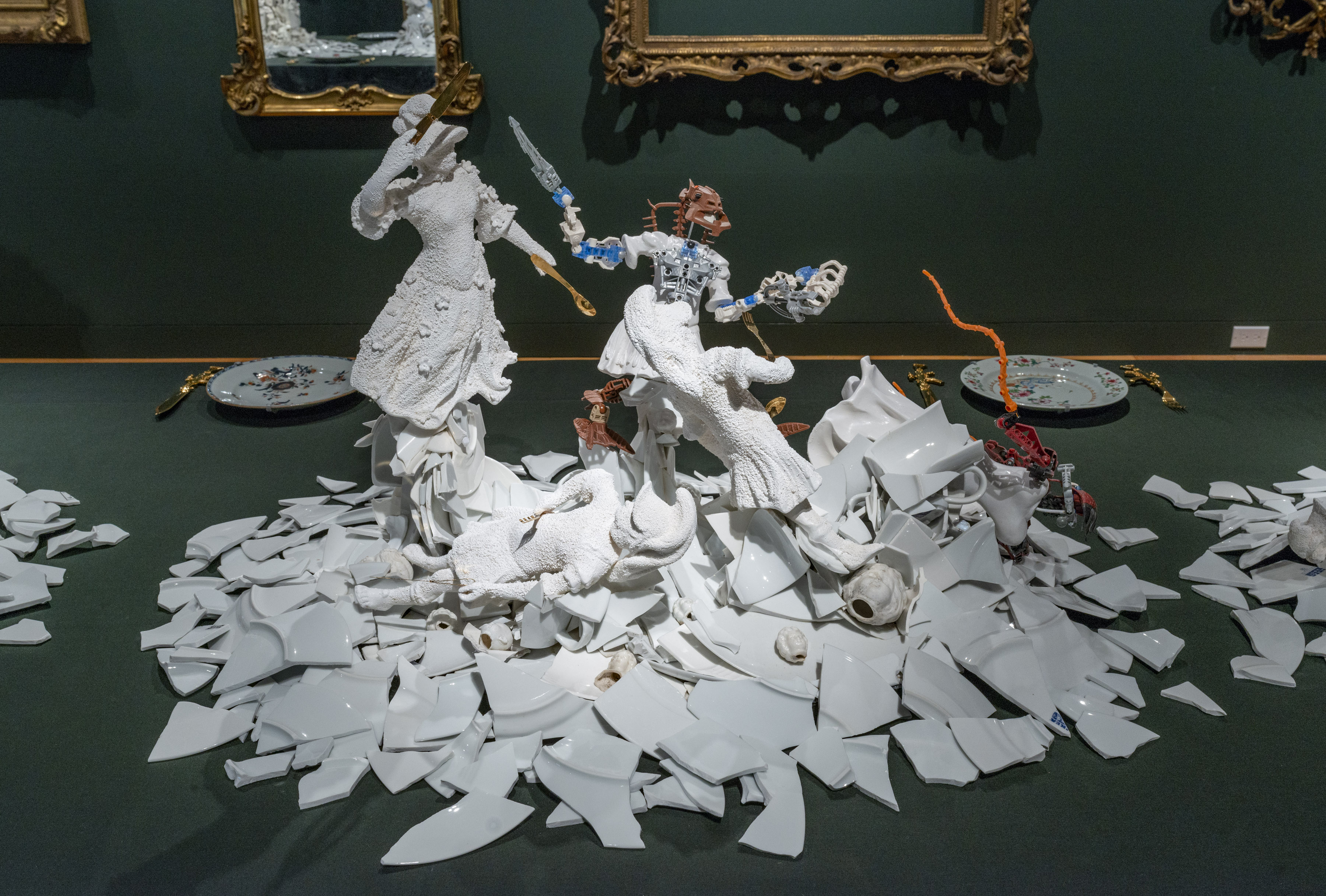 A conservator by trade, de Vries usually repairs porcelain. As an artist he inverts that role using old objects with newly broken inexpensive IKEA plates, mass-produced in China. In this way he casts light on the irony of how much the value of porcelain has changed since the 18th century and he shares that with the viewer by putting one of the fragments upside down to reveal the IKEA logo. Porcelain skulls and broken figures make up the mushroom cloud—de Vries sourced them from dealers and flea markets along with unfinished Hummel porcelain figures of children which were found at an old German factory site and sold on eBay. For de Vries, the mushroom cloud is the culmination of the centerpiece, an image that is both beautiful and horrible at the same time.

Six battles flank the centerpiece fought by myriad miniature figures. The larger ones are made of sugar-coated plaster, molded from eighteenth-century figures of Mars and Minerva from the Derby Porcelain Factory in England. The battling figures have mutated to become cyborgs with colorful, plastic “bionic” limbs and heads from broken Transformer toys. The striking diversity among the sugar, porcelain, and plastic underscores the tension between the handmade and the industrial. 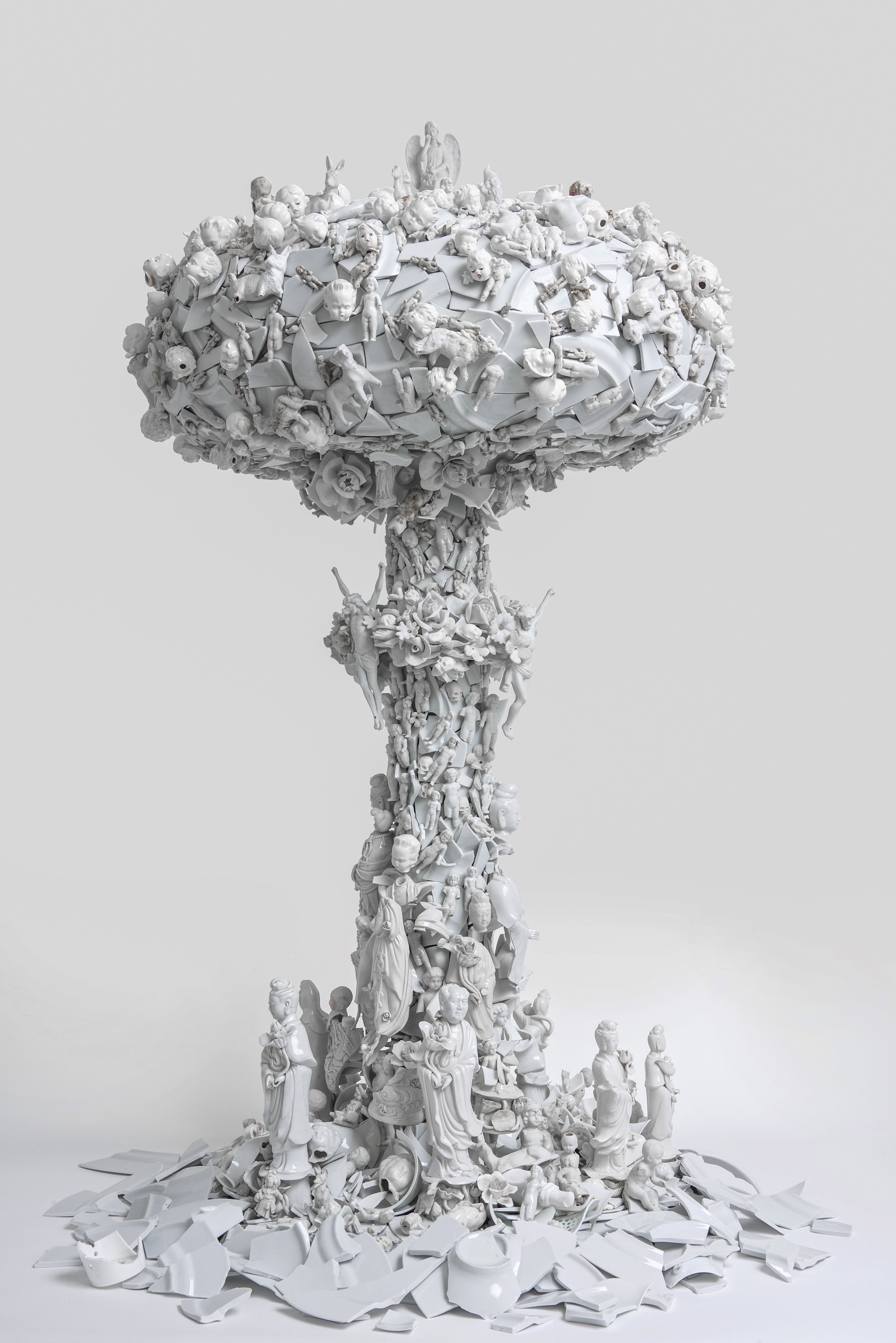 “Featuring ‘War and Pieces’ at the Wadsworth Atheneum makes perfect sense,” says Senior Curator and Charles C. and Eleanor Lamont Cunningham Curator of European Decorative Arts Linda Roth. “We have an outstanding collection of the very kind of porcelain figures and centerpieces that Bouke de Vries references in this monumental work. And we are especially pleased to have ‘War and Pieces’ coincide with our fall exhibition, Monsters and Myths, which like de Vries’s installation, is a creative reaction—a great work of art—born of bellicose times.”

“War and Pieces” has been shown at a number of stately properties in Europe and is making its American landfall at the Wadsworth. Here it is confronted by walls hung densely with mirrors and empty frames from the collection, set with Chinese plates and his gilded cutlery. Displaying porcelain in front of or on mirrors was common in the eighteenth century, when the only light in the evening was provided by candles. The reflective nature of the porcelain and mirror glass enhanced and enlivened the flickering candlelight to create a magical dining setting. But the porcelain creations on 18th-century tables would have been either lighthearted fantasies or symbolic presentations imbued with political narratives. 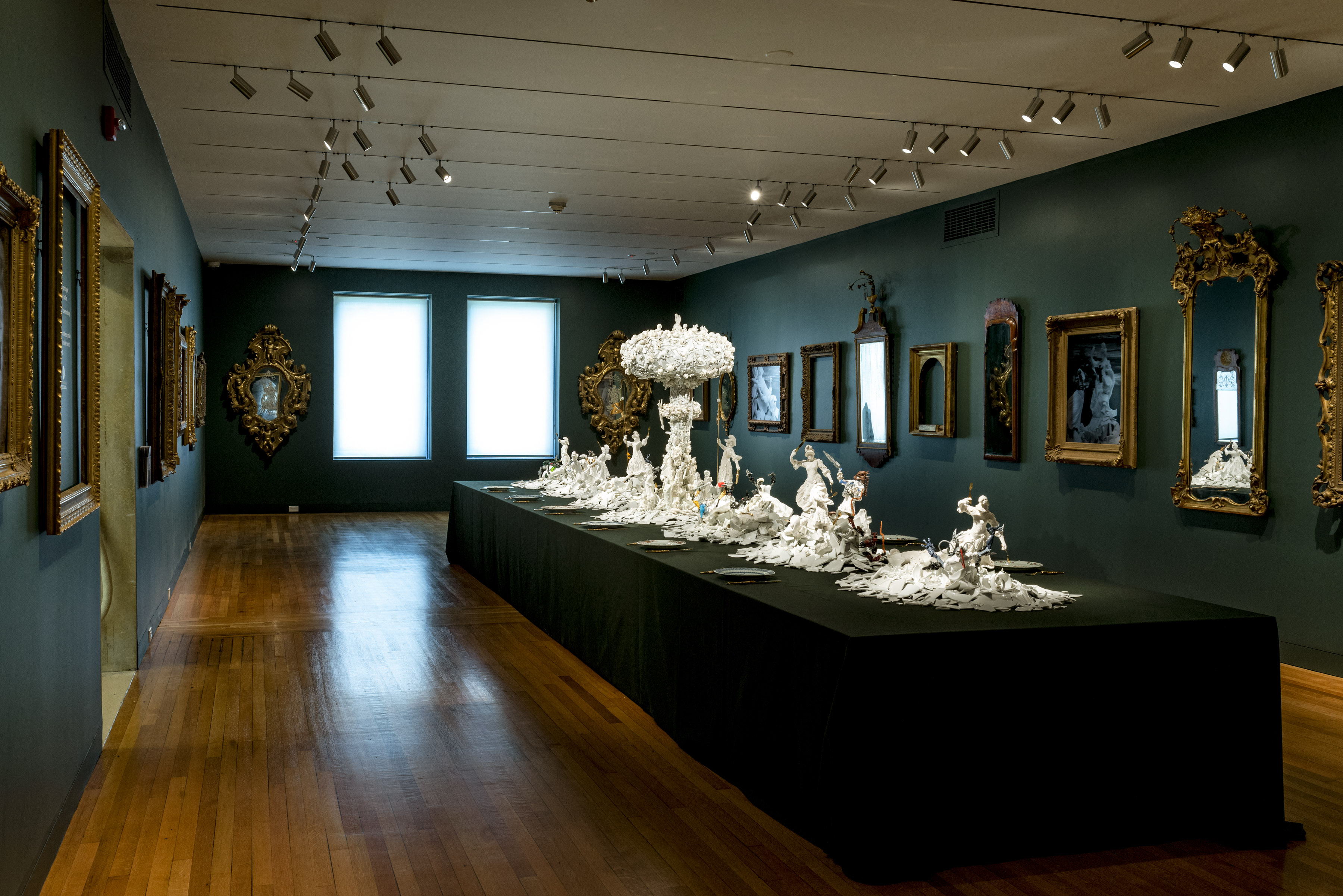 Born in Utrecht, The Netherlands, Bouke de Vries studied at the Design Academy, Eindhoven, and Central St Martin’s, London. After working with John Galliano, Stephen Jones and Zandra Rhodes, he switched careers and studied ceramics conservation and restoration at West Dean College. De Vries has written about his work relating it to his practice as a private conservator where every day he was faced with issues and contradictions around perfection and worth. The Venus de Milo is venerated despite losing her arms, but when a Meissen muse loses a finger she is rendered virtually worthless; where even an almost invisible hairline crack, a tiny rim chip or a broken finger render a once-valuable object practically worthless, literally not worth the cost of restoring. Using his skills as a restorer, his artworks reclaim broken pots and ceramic sculptures; instead of reconstructing them, he deconstructs them, emphasizing their new status, installing new virtues, and moving their stories forward.