Studio Job will be featured in a solo exhibition presented by Carpenters Workshop Gallery at Design Miami/2014, from December 3 through 7.

Exquisite recent work by Dutch-Belgian design team Studio Job will be featured in a solo exhibition presented by Carpenters Workshop Gallery at Design Miami/2014, from December 3 through 7 (in conjunction with Art Basel Miami Beach 2014).

Inspired by the world’s most iconic buildings, Studio Job presents the exhibition “Landmark”.

It is not a rule of law, but I do believe that buildings tell a lot about their inhabitants. Humans as creating beings….

Landmark, the new exhibition by Studio Job in Miami is not a closed-end collection, but an installation of monumental sculptures from the period 2019-2014. The selection was made in collaboration with Mr. Loic Le Gallaird and Mr. Julien Lombrail, the founders of Carpenters Workshop Gallery in Paris and London.

Architecture is what connects the exhibition. Cast in bronze, monumental interpretations of world famous buildings. But these icons are positioned anew, and find themselves in a vulnerable position, blown up or reduced to a simple lamp.

What also connects the sculptures is the ultimate effort for the ultimate work. They are Renaissance pieces for the contemporary applied arts.

A highlight of the collection is “Chartres,” an immense cabinet modeled after the medieval Chartres Cathedral in France. While the front is covered with opulent gold leaf and the sides reproduce the church’s entrance, there are two spiky steeples made of blackened bronze which jut out from the back, giving the piece a dark, gothic undertone. 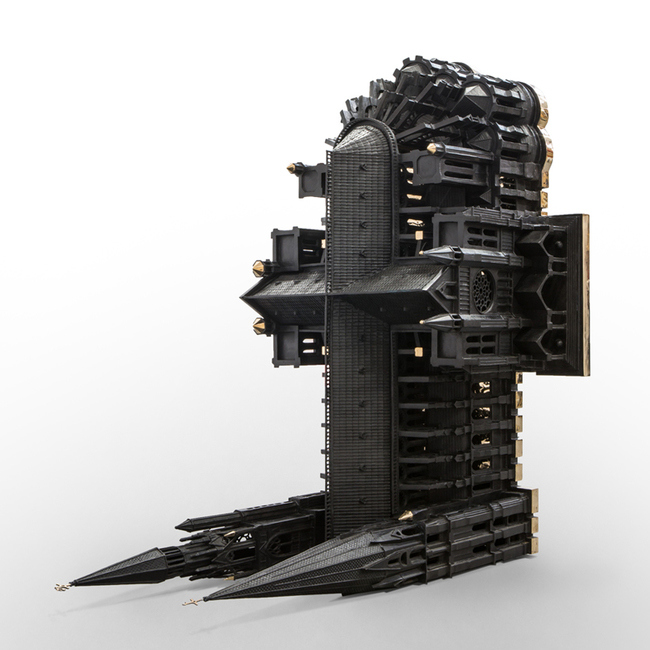 The “Eiffel Tower” lamp—intricately sculptured from hand-patinated bronze—gracefully curves over at the top of the ‘tower’ from which the fixture’s gilded beacon glows. 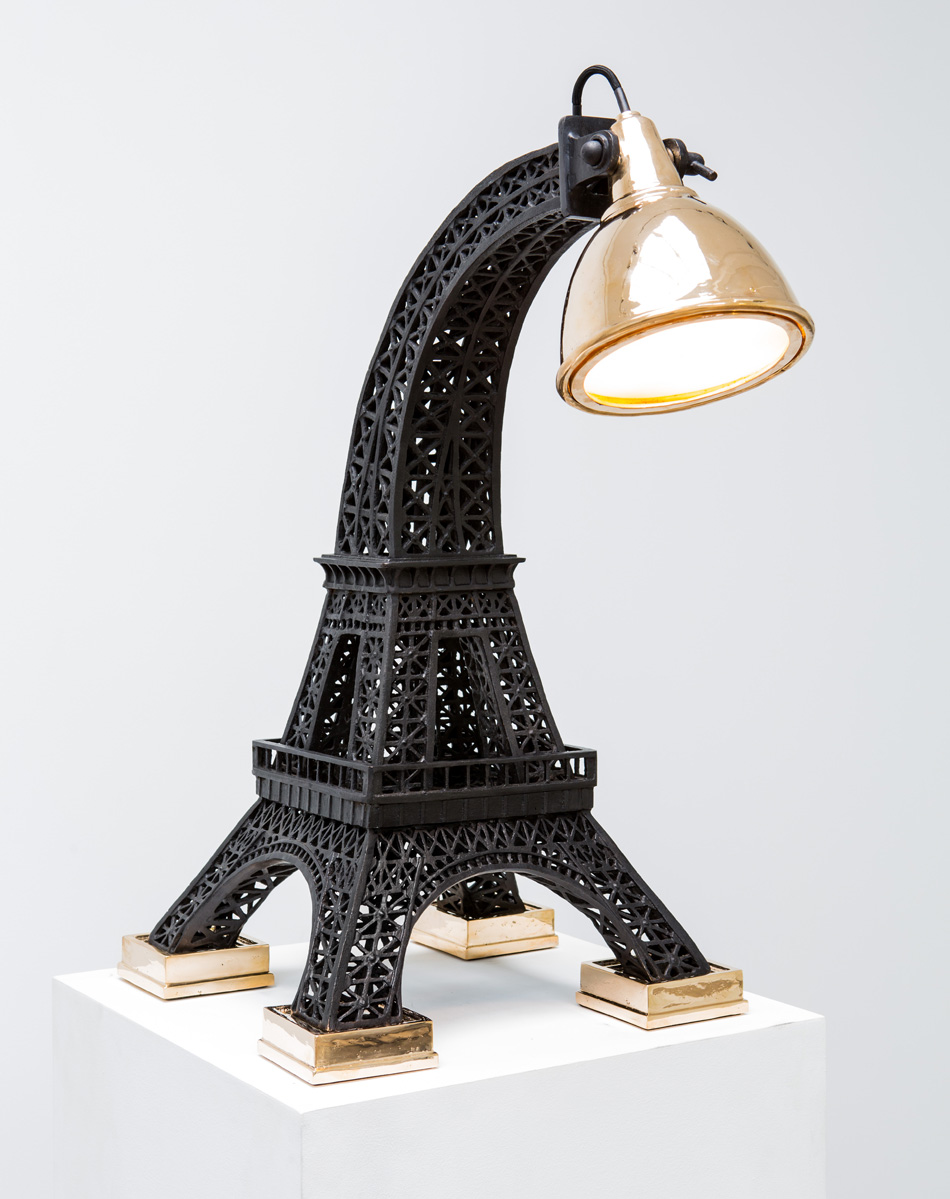 Visitors to the exhibit will get to see the duo’s cool interpretation of the Taj Mahal of India, with the famed structure turned upside down and transformed into a table, the base of the building becoming its top. 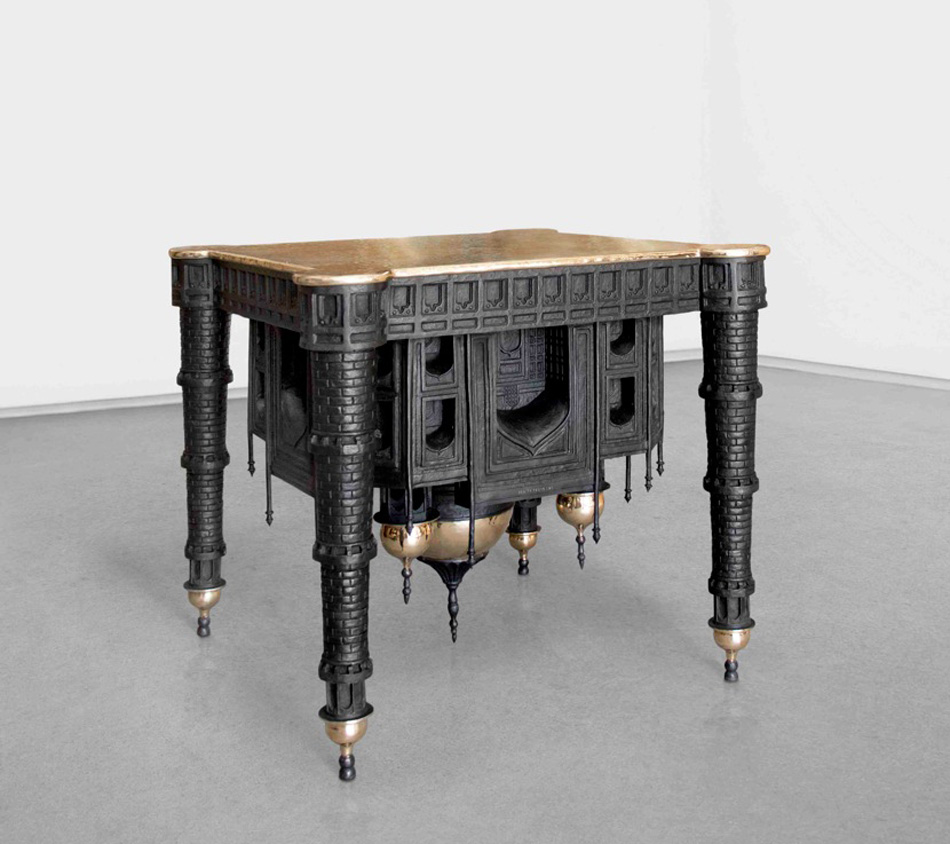 Founded in 2000 by Nynke Tynagel and Job Smeets both graduates of the Design Academy Eindhoven now based in Antwerp and Amsterdam. They redefine the applied arts for the contemporary age. Their collaboration has created highly expressive, mainly one-off or limited edition works, from the outset.

Opulent, intricate and ironic, Studio Job combine an extraordinarily high level of craftsmanship with extreme ornamentation. They reference both the traditional and the topical, the organic and the artificial. This narrative conveys a tension between the good and the bad exploring all facets of each. The Studio Job iconography is at once heraldic and cartoonlike, expressive and yet somehow primitive. Their style is placed within an enigmatic, intellectual framework by the number and complexity of symbols and signifiers it conveys. Studio Job’s work is widely collected both in the private and public sectors. Their designs have been shown in the important galleries, fairs and is added to more than 40 international museum collections. Carpenters Workshop Gallery transcends classical borders in terms of art and design. Its proposal stands just at the intersection of these two universes, reaching precisely a symbiosis of art and design. Carpenters Workshop Gallery produces and exhibits functional sculptures by international rising and already established artists and designers going outside their traditional territories of expression. The gallery is actively involved in the research and production of the limited-edition works exhibited.

The choices are guided by the research of an emotional, artistic and historical relevance – relevance that appears as evidence. The gallery relies on the partnership of childhood friends, Julien Lombrail and Loic le Gaillard. They first opened a space in London’s Chelsea in 2006 in a former carpenter’s workshop; they then followed with a second space in Mayfair in 2008.

The opening of a 600 square meter space in Paris in 2011 at 54 rue de la Verrerie, an address steeped in history as it was previously occupied by the Galerie de France for several decades, is a kind of return to their roots. This Paris expansion confirms the commitment of the two founders of the gallery, as well as that of Aurelie Julien, the gallery’s director, to the international promotion of their artists and designers.

Design Miami/ 2014 is in conjunction with Art Basel Miami Beach 2014. For a complete overview on Dutch artists, designers and projects during this week, view here. (Text via HauteLiving).