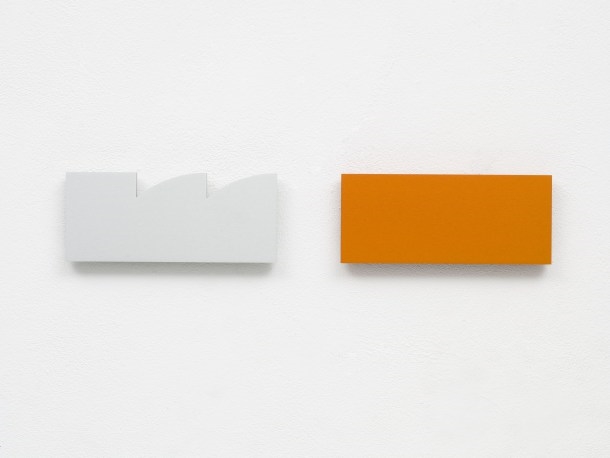 Cecilia Vissers' work is part of the opening exhibition of Inde/Jacobs Gallery in Marfa, Texas from May 9 to June 24.

Cecilia Vissers‘ work is part of the opening exhibition of the inde/jacobs Gallery in Marfa, Texas to be seen from May 9 to June 24.

The new gallery was designed by Claesson Koivisto Rune of Stockholm, Sweden. The concept of the design involves elongating the perspective, making the 115′ long building feel even longer. The interior, divided into a gallery, inner courtyard and residence, includes floating walls, etc. This will be the first Claesson Koivisto Rune building to be built in the U.S.

Vissers’ shaped but hard edge minimalist sculptures are inspired by her love of landscape. An established artist from The Netherlands, Vissers keeps her pallet mostly to a very small number of colours (gray, black and orange being her mainstays) but by a deeply considered shaping of the object and thereby of the colours, the artist inspires a feeling of deep spacial awareness and understanding of the loneliness of being outdoors lost in the forces of huge mountains and deep lakes

Nature seems restless and unstable all across the world recently, but our meditations on its changeable state can sometimes result in the thing we define as art. Your work, restrained as it is, still manages to incorporate the vital yet ineffable sensation of being in ’emotional’ touch with the ‘other’–which is quite a remarkable thing in contemporary art.

“My sculptures became more minimal by degrees to the point that since 2006 I have mainly been concerned with wall based sculptures executed in steel and aluminium. I want my sculptures to be entirely simple, to be viewed quickly, the focus is on the smooth and flat surface obtained by specialized industrial processes’.

The work of Cecilia Vissers has been widely published; recent publications include the monograph ‘Canna’ and the publication ‘so far’ with a special commissioned essay by art historian Cees de Boer (Amsterdam).