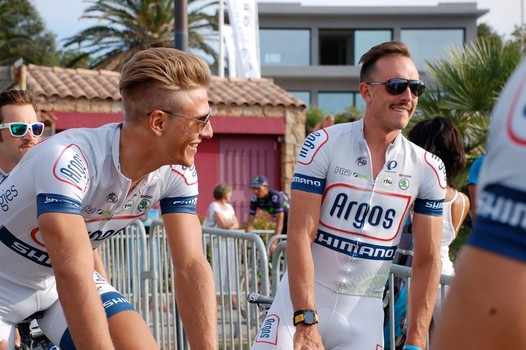 'Clean Spirit' DVD released in the US.

‘Clean Spirit’, directed by Dirk Jan Roeleven, is an insider look at the Argos-Shimano team as they prepare for and take part in the 2013 Tour de France. On March 24th, de DVD was released in the US by First Run Features.

Too many doping scandals have damaged the sport of cycling. But ‘Clean Spirit’ introduces us to one pro cycling team that strives to compete the “right way” and in the process has launched the careers of two of the most talented riders of this generation, Marcel Kittel and John Degenkolb. The two young sprinters, along with their teammates, are determined to show that winning is possible without doping. As we follow the team during the 100th edition of the Tour de France, the excitement builds as stage wins and the yellow jersey are on the line.

Like the classic ‘A Sunday in Hell’, ‘Clean Spirit’ shows much more than just the race. We see the team in their hotel rooms, on the team bus, on training rides, at meals and massage, in team meetings, and celebrating (or commiserating) after victories, defeats and crashes. Most of all, we see a team dedicating to competing cleanly, and putting their heart and soul into success on the road.

“Truthfully captures the glorious highs and dramatic lows of professional cycling through the eyes of its new, young stars.” – Cycle Sport Magazine

“The filmmakers encapsulate the agony and ecstasy of the world’s biggest bike race. The end result is intimate and authentic… rich subject matt er gives the film a clear, emotionally-satisfying narrative.” – The Independent (UK)

“‘Clean Spirit’ is a ‘Sunday in Hell’ for modern cycling, a behind-the-scenes look that is full of views from the buses, hotel rooms and the team cars. You wait with the riders as they prepare for a stage while listening to Jay-Z, you watch as they are slowly worn down by three weeks of stage racing, you see the inside jokes (especially about Kittel’s hair) and you see them rally around one another on their way to Paris. It’s an inspiring tale, and you come away admiring the sacrifice and determination the riders evidence. And hopefully it’s a true tale of clean racing, and not another chapter of fiction from the sport’s past.” –Dan Schmalz, NY Velocit