Jan Banning will participate in the group exhibition Collateral Damage, which will be held at the Anya and Andrew Shiva Gallery in New York, from September 8, until October 21. The participating artists examine, explore, and highlight the issue of collateral damage as a consequences of war crime and traumatization these people. Other artists in this exhibition, are as follows: Steve Cavallo, Mona Higuchi, Su Kwak, Chang-Jin Lee, Despo Magoni, Despina Meimaroglou, Yong Soon Min, Min Sun Oh, Frank van Osch (NL), Junghwa Paik, Jin Powel, and Lydia Venieri.

This exhibition examines issues of rampant violence during WWII, the Vietnam War, Khmer Rouge and other conflicts where innocent non-combatants were affected. While these conflicts impacted everyone, women, children, elderly and the infirm suffered to a greater extent because of their vulnerability. Women especially were the subject of sexual assault and exploitation, and their bodies were often and still are, violated as a war tactic. The plight of women who suffered during times of conflict continues in the aftermath of war, not only because of the enormous psychological and emotional trauma that has marked them, but also the social and cultural stigma attached to their horrendous experiences.

While the exhibition deals with the subject of the victimization and trampling of non-combatant human rights in conflict-ridden areas, it will afford a greater focus on WWII Asia and ‘comfort women.’ The term “comfort women” or Ianfu, is a Japanese euphemism coined by the military to refer to women they trafficked, beguiled, imprisoned, and forced into sexual service to relieve their soldiers’ fears and desires. This was one of the most horrific cases of violation against women and girl’s right in modern history. WWII and Nazi atrocities have been the subject of many books and exhibitions as have Stalin’s massive pogroms. But, the topic of sexual appropriation by soldiers during times of conflict has been somewhat eclipsed most likely due to the social taboo attached to victims still living. 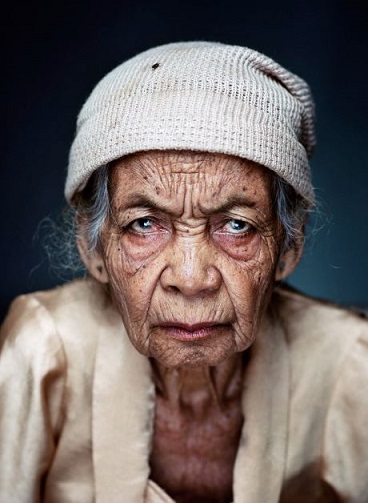 Jan Banning is a Dutch autonomous artist/photographer, based in Utrecht, the Netherlands. He was born in Almelo (Netherlands) on May 4, 1954, from Dutch East Indies parents, and he studied social and economic history at the Radbout University of Nijmegen. Both of these facts have had a strong influence on his photographic works.

His origin is expressed in the choice of subjects, such as Indonesian women who were forced to become prostitutes for the Japanese army during the Second World War in ‘Comfort Women’; or former forced labourers in South East Asia during the same period in ‘Traces of War: Survivors of the Burma and Sumatra Railways’; also the repatriation of elderly Moluccans from the Netherlands to the Indonesian Moluccas in ‘Pulang: Back to Maluku’.

His study can be seen in the historical components of his subject matters. His academic education is expressed in his aim to achieve sound intellectual foundations for his self-initiated projects on the basis of a thorough preliminary investigation. DeVolkskrant reviewer Merel Bem wrote: ‘Each subject that Banning approaches (…), the photographer dives right in with the passion of a scientist’; and ‘This investigative approach might be an explanation for the fact that the form is a direct, concentrated and controlled result from the content’ (in De Volkskrant 8-5-2010, review of ‘Comfort Women’).

About the Anya and Andrew Shiva Gallery

The Anya and Andrew Shiva Gallery is the primary fine art gallery at John Jay College of Criminal Justice, a senior college of the City University of New York in Midtown Manhattan, New York City. The exhibitions feature a variety of media, but are heavily focused on social issues and the humanities.Opened in 2013, the gallery is 4,050 square feet and sits on the ground floor of John Jay’s 620,000-square foot building that sits on 11th Avenue and 59th Street in New York City, a four block walk from Central Park. The building was designed by Owings and Merrill.

This 4,000 square-foot art gallery is situated on the corner of 59th street and 11th avenue. It contains a state-of-the-art moveable wall system which allows the space to be reconfigured for each exhibition or cleared in its entirety for use as a multi-purpose space. For a view A 360 ° Virtual Tour of the Anya & Andrew Shiva Gallery, click here.

Frank van Osch is a Dutch film maker with a passion for telling stories that are personal, observative and about recogonizable subjects in human life. He directs documentaries about passion, secrets and dreams. He won two first prizes at American film festivals, for his documentary ‘Omdat Wij Mooi Waren‘ (because we were beautiful), which tells the story about Japanese girls who were used as sex attributs by Japanese soldiers. He is the CEO of his company Vanoschfilms.