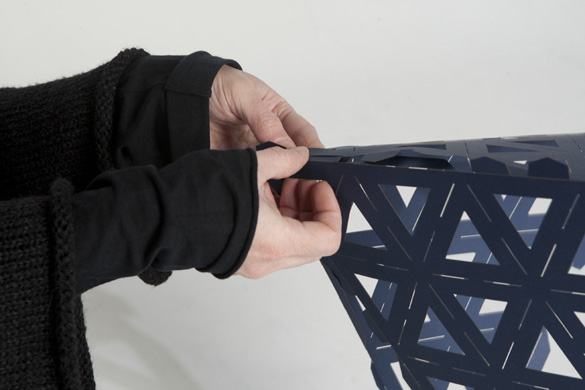 Noa Haim‘s Collective Paper Aesthetics modular units will be on view in a community project at Art Center Sarasota until June 26.

Haim created the Collective Paper Aesthetics program as a way to inspire collaboration and exploration in large groups through art. Using principles of design and engineering, Haim has created a project where room-sized installations can be created out of various three-dimensional paper forms. Community members will be able to come in to the Art Center during designated times to get a short lesson on creating the components, and begin constructing the pieces. When it comes time for the exhibit to be installed, the exhibitions curator and a team of volunteers will erect a free-form structure from the pieces created during the months preceding the installation. The installation can be continually added to by community members throughout the exhibit. Walk in and add a piece.

The work Collective Paper Aesthetics is one of the Entry winners in Dezeen x Design Association container design competition, and will be exhibited during Tokyo Design Week from October 28^th until November 3^rd . Previously her work received Honorable mention from Seoul Design Festival 2009. Competition was organized by design.seoul.go.kr and seouldesign.or.kr. Along with runner-up in Recycling design prize 2009 organized by recyclingboerse.org and in Made in Mecaf organized by macef.it