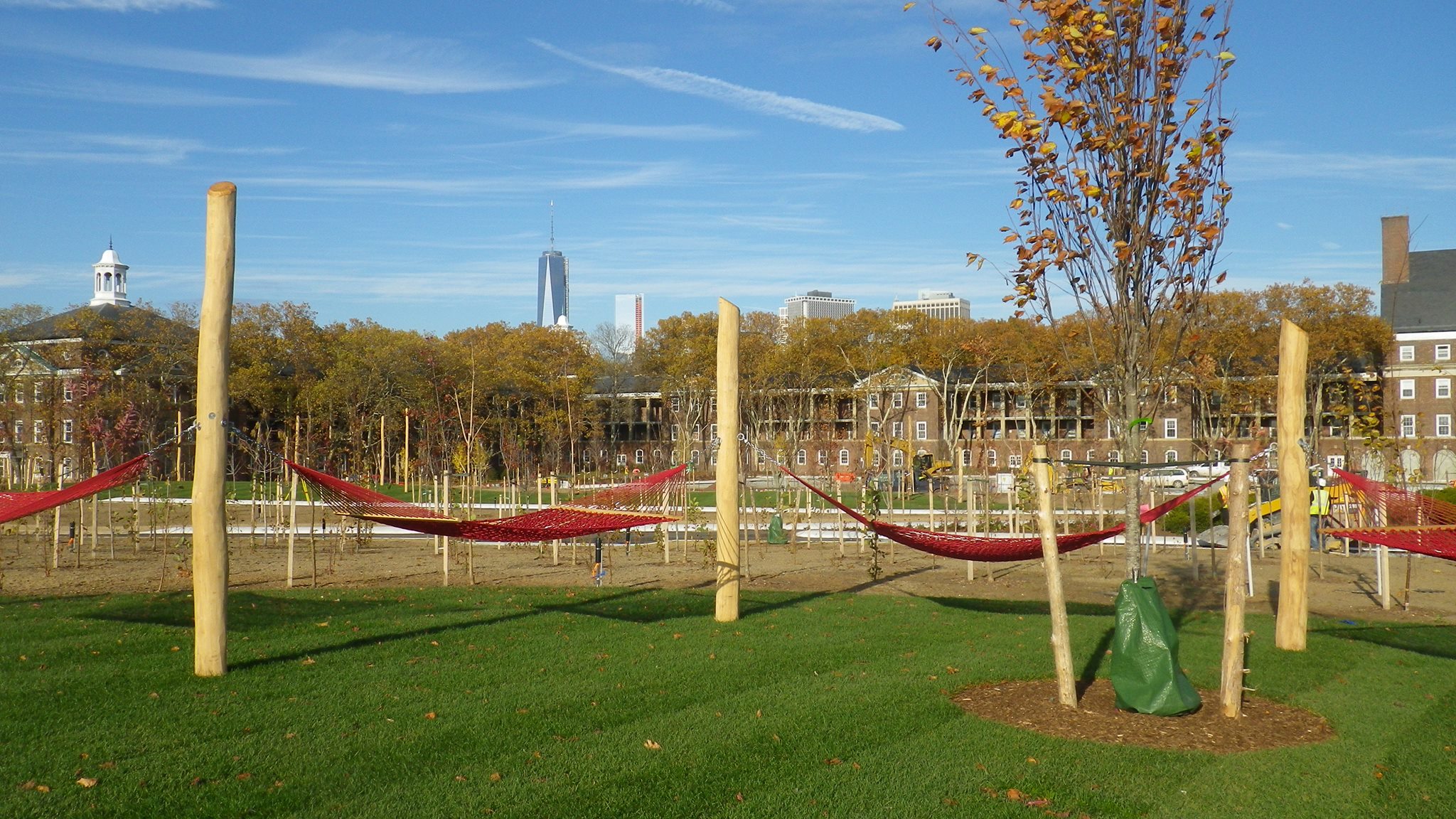 On Thursday, November 14, Mayor Bloomberg planted the 800,000th tree as part of the MillionTreesNYC initiative, and the 800,000th tree also marked the completion of the first phase of the new Governors Island Park by West 8. Phase one of Governors Island Park is 30 acres of new parkland that will open to the public in May of 2014. Since Governors Island was first opened to the public in 2005, the Island has transformed into a destination for New Yorkers and visitors, home to extraordinary open space with a dynamic mix of uses.

MillionTreesNYC is a signature initiative of the City’s comprehensive, long-term sustainability agenda, PlaNYC, which began in 2007 with the goal of reaching one million trees planted by 2017. The initiative is now expected to reach one million trees by 2015, two years ahead of schedule. The Mayor made the announcement on Governors Island where he was joined by First Deputy Mayor Patricia E. Harris, Department of Parks and Recreation Commissioner Veronica M. White, Trust for Governors Island Chair Ronay Menschel and President Leslie Koch, State Senator Daniel Squadron, landscape architect Adriaan Geuze of West 8, and a wide range of civic organizations, advocacy groups, Harbor School students, Island programming organizations and others to celebrate the milestones.

“At the beginning of our Administration, Governors Island was little more than an abandoned and neglected green space with derelict buildings,” said Mayor Bloomberg. “Twelve years later, Governors Island has become a major attraction for New Yorkers and visitors, as its 172 acres continue to grow more dynamic, more resilient and more beautiful each day. Today marks another important step forward for the Island, and the 800,000th tree of our MillionTreesNYC program could not have a better home, where it will be part of this spectacular new park that will open next spring.”

“NYC Parks is proud to be a part of planting MillionTreesNYC’s 800,000th tree here on Governors Island, one of the most historic and picturesque spots in the City,” said Commissioner White. “Thanks to Mayor Bloomberg and First Deputy Mayor Patti Harris’ leadership, it is great to see Governors Island in the midst of an amazing transformation and to also see how the MillionTreesNYC initiative has changed the City into a greener and healthier place to live.”

“Since its inception, MillionTreesNYC has not only increased NYC’s urban forest, but also engaged thousands of New Yorkers to help clean the city’s air and green its public spaces,” said Director of the Office of Long-Term Planning and Sustainability Sergej Mahnovski. “Today, thanks to the efforts of over 27,000 volunteers and the leadership of partners like Governors Island, we are 800,000 trees closer to reaching our goal of one million, ensuring a greener, greater New York for generations to come.”

“The resilient design features of Governors Island, such as elevated topography and salt-tolerant vegetation, helped to mitigate the impacts of Sandy,” said Director of Resiliency Daniel Zarrilli. “These same features can be applied across the City to protect open spaces and ecosystems and can play a key role in reducing storm risks to adjacent neighborhoods.”

“I am thrilled to celebrate today’s tree planting, which marks the completion of the first 30 acres of parkland on Governors Island,” said Congressman Jerry Nadler. “Thousands of visitors will be able to enjoy these trees next spring, and I look forward to seeing the continued progress of this wonderful attraction. We have all worked hard to transform Governors Island into the amazing urban oasis we see today. Congratulations to the Trust for Governors Island, Mayor Bloomberg, and to everyone who helped make this day happen.”

“Governors Island is a jewel in our harbor and one of the most exciting and beautiful public spaces in our city,” said Assembly Speaker Sheldon Silver. “By completing the first phase of Governors Island Park, we are further opening up a unique and special part of our waterfront. As the Assemblyman who represents Governors Island, I have worked tirelessly to help ensure that it continues to be such an invaluable resource for not only my Lower Manhattan neighbors, but for visitors throughout the city and the world.”

“Today marks yet another step toward making Governors Island the center of a unified Harbor Park – a central park for the center of our city,” said State Senator Daniel Squadron. “New Yorkers and visitors will enjoy this incredible waterfront destination that’s just minutes from Manhattan and Brooklyn. I’m proud to have worked with the Trust, the City, and everyone who made today possible.”

“The new park on Governors Island will be a welcome respite for New Yorkers and visitors alike, offering much-needed green space for recreational activities,” said Manhattan Borough President Scott M. Stringer. “At the onset of planning, I stressed the need for smart development of this forgotten land, including investments in parkland, transportation and infrastructure, and I am very pleased with the progress being made. Governors Island is well on its way to becoming Manhattan’s next great public space.”

“Today’s tree planting marks the end of the first phase of Governors Island Park, but it also represents a new and exciting beginning for this well-loved piece of our city’s history,” said Council Member Margaret Chin. “Before our eyes, Governors Island is transforming into a vibrant destination for New Yorkers and visitors alike, with breathtaking landscapes, lush greenery, and family-oriented activities that will keep us coming back. I thank the Trust for Governors Island for their staunch commitment to the revitalization of this park and all it has to offer.”

The new 30 acres of parkland include Liggett Terrace, a sunny, six-acre plaza with seasonal plantings, seating, water features and public art; Hammock Grove, a sunny ten-acre space that is home to 1,500 new trees, play areas and 50 hammocks; and the Play Lawn, 14 acres for play and relaxation that includes two natural turf ball fields sized for adult softball and Little League baseball. In addition, new welcome areas have been added at the Island’s ferry landings, as have key visitor amenities, including lighting, seating and signage throughout the Historic District.

This past July, Mayor Bloomberg broke ground on The Hills, an additional 10 acres that are the culminating feature of the new Governors Island Park. Made of recycled construction and fill materials, The Hills will rise 25 to 80 feet above the Island, and the summit of the tallest Hill will provide visitors with a 360-degree panorama of the Statue of Liberty, New York Harbor and the Lower Manhattan skyline. The Hills are currently under construction with the goal of completion in 2015.

Today’s announcement is just the most recent development in Governors Island’s transformation. The Island has become a popular public destination in recent years, with close to 400,000 visitors during the 2013 season, compared to a mere 26,000 visitors as recently as 2006. Dozens of cultural and recreational organizations have taken advantage of the Island’s historic buildings and green spaces to present lively free programs to the public.

In addition, the Bloomberg Administration has invested $260 million to make critical upgrades to the Island’s infrastructure and to construct the new park spaces. The capital program – including the restoration of potable water and the upgrading of electric, telecommunication and maritime infrastructure – is well underway, and remains on time and on-budget. Finally, the Trust has recently identified three organizations as finalists as a result of a Request for Proposals process for prospective tenants in the buildings in the Historic District. “Governors Island is a wonderful resource for Downtown,” said Catherine Hughes, Chairperson of Community Board 1 and Trust for Governors Island Board Member. “The new park will give thousands of New Yorkers 30 new acres where they can relax and play.”

“Governors Island is a special resource for all New Yorkers: a place for recreation, culture, creativity, and enjoyment of open spaces,” said Ronay Menschel, Chair of The Trust for Governors Island. “Transformative investments in infrastructure and new park spaces are making it an exciting place where increasing numbers of people want to be.”

“Governors Island has made tremendous progress over the past several years, and has become one of New York City’s most lively and loved destinations,” said Leslie Koch, President of The Trust for Governors Island. “We are so pleased that these wonderful new park spaces will provide even more opportunities than ever for New Yorkers to enjoy the Island and all it has to offer.”

“What a great symbolic milestone to see the final tree planted in this new park,” said Susan Carey Dempsey, Executive Director of the Governors Island Alliance. “It makes us look forward to next May’s Opening Day Family Festival, when we’ll welcome the first visitors back on the Island to see the beautiful transformation that took place this fall.”

“It has been a great honor to partner with this Administration and the Department of Parks and Recreation to forge this historic green legacy for our city,” said Amy Freitag, Executive Director of New York Restoration Project. “NYRP looks forward to continuing the partnership to ensure proper stewardship, so our urban forest can serve New Yorkers for generations to come.”

“Today’s planting symbolizes the beginning of a new and exciting chapter in the history of the Island,” said Patti Reilly, Superintendent of Governors Island National Monument. “The completion of the 30 acres for the public park will expand opportunities for our visitors and offer unique views of our sister park, the Statue of Liberty National Monument and Ellis Island. The National Park Service congratulates Mayor Bloomberg and The Trust on this incredible achievement.”

“This is a red letter day for our waterfront,” said Roland Lewis, Executive Director of the Metropolitan Waterfront Alliance. “The glorious completion of a stunning new park on Governors Island adds beauty and fun to our harbor, and the City’s sublime 800,000th tree milestone creates more green infrastructure, soaking up storm water and making our harbor healthy. Bravo!”

“The 30-acre park comprising Liggett Terrace, Hammock Grove and the Play Lawn provides a truly one-of-a-kind experience for all New Yorkers,” said Holly Leicht, Executive Director of New Yorkers for Parks. “Often ambitious visions like the one conceived for this remarkable site go unrealized or half-realized – but the Trust for Governors Island has gone all the way in making its grand plans for this park a grand reality.”

Public art is also an important part of the Island’s new landscape. The work of two artists is currently integrated into the new park. The sculptor Mark Handforth has created four pieces that respond to the new spaces at Liggett Terrace and South Battery. These will be on display through 2014. Additionally, Susan Philipsz has created a permanent sound installation, “Day is Done,” which uses the notes of “Taps” to signal the end of the day, evoking the Island’s history as a military base. Susan Philipsz was selected through the Percent for Art program. These site-specific pieces are a part of the Trust’s Commissions @ Governors Island: A Public Art Program, which is curated by Tom Eccles.

MillionTreesNYC, a cornerstone of Mayor Bloomberg’s PlaNYC vision to establish a healthier, more sustainable New York City, is a public-private partnership between the New York City Department of Parks & Recreation and Bette Midler’s New York Restoration Project, through which one million trees will be planted and cared for throughout the five boroughs by 2015. New trees help expand canopy cover in New York City, increasing air quality and storm water benefits. Since MillionTreesNYC was launched in October 2007, the initiative is two years ahead of schedule. For more information, visit www.milliontreesnyc.org.