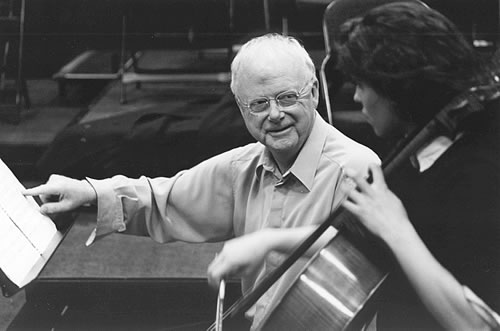 During 'Andriessen 75', a week-long festival dedicated to the beloved Dutch Composer Louis Andriessen, five Washington D.C. organizations, including The Atlas Performing Arts Center, Great Noise Ensemble, National Gallery of Art, Strathmore, and Shenandoah Conservatory, will present a full program honoring the composer in his 75th birthday. Andriessen will be present throughout the festival.

During ‘Andriessen 75’, a week-long festival from April 6-13 dedicated to the beloved Dutch Composer Louis Andriessen, five Washington D.C. organizations, including The Atlas Performing Arts Center, Great Noise Ensemble, National Gallery of Art, Strathmore, and Shenandoah Conservatory, will present a full program honoring the composer in his 75th birthday. Andriessen will be present throughout the festival.

Developed by Armando Bayolo, the Great Noise Ensemble founder and New Music curator at The Atlas Performing Arts Center, the Festival features a host of premieres and defining works by the honored composer, alongside pieces and performances by his collaborators, students, and friends. Highlights include the U.S. premieres of Andriessen’s The Family Revisited, Monument to Graettinger, and Image de Moreau (Andriessen’s printed collection of solo piano works, performed in its entirety); the D.C.-area premiere of his most recent major opus, La Girò, a violin concerto written expressly for internationally renowned performer and Andriessen interpreter, Monica Germino; the D.C. premiere of Andriessen’s Grawemeyer Award-winning opera, La Co mmedia (free of charge), with mezzo soprano Cristina Zavalloni. The Bang on a Can All-Stars present the D.C. premiere of Life, composed for the ensemble, on a program with pieces by leading American composers (and Andriessen protégés) David Lang, Michael Gordon, Julia Wolfe, and Steve Martland (programmed in memoriam). Aeolus Quartet closes the Festival powerfully with a performance of Andriessen’s complete string quartets.
According to Armando Bayolo, curator of Andriessen 75, Louis Andriessen’s influence on American composers and musicians of the post-Baby Boom generations is well-documented, as is the influence of American music on him. “His music and aesthetics have had an enormous impact upon my own work, both as composer and as an advocate for the music of our time. The current mood in contemporary concert music—optimistic, energetic, informal, irreverent, fun—can be directly attributed to Louis. It is for this reason that, as the Washington new music scene continues to grow and its national presence expands, we wish to honor Andriessen’s work on the occasion of his 75th birthday.”
Louis Andriessen himself is honored that his music will be celebrated in Washington D.C.: “It’s amazing how much American culture has influenced my music. If not for the music of jazz and American avant-garde composers, such as John Cage and Robert Graettinger, I would have been a different composer. My connection to American music is perhaps one of the reasons why Armando Bayolo and other Washington area organizations are able to organize this festival today.”

Louis Andriessen was born in Utrecht in 1939 into a musical family: his father Hendrik, and his brother Jurriaan were established composers in their own right. Andriessen studied with his father and Kees van Baaren at the Hague Conservatory, and between 1962 and 1964 undertook further studies in Milan and Berlin with Luciano Berio. Since 1974 he has combined teaching with his work as a composer and pianist. From a background of jazz and avant-garde composition, Andriessen has evolved a style employing elemental harmonic, melodic and rhythmic materials, heard in totally distinctive instrumentation He is now widely regarded as the leading composer working in the Netherlands today and is a central figure in the international new music scene.

A short documentary can be seen here.

Opening Andriessen 75 is the D.C. premiere of the composer’s 2011 Grawemeyer Award-winning magnum opus, La Commedia, a five-act film opera based on Dante’s The Divine Comedy. The Sunday Times (UK) has called La Commedia “the distillation of a lifetime’s creativity,” continuing, “Its questing vigour is of a materialist, Brechtian, Godardian kind. It relishes the mixture of media, musical quotations and parody, intellectual subtexts and ironic commentary while remaining spunkily itself — a brilliant, new-fangled circus.”

For this performance, Armando Bayolo conducts mezzo-soprano Cristina Zavalloni (who sang the world premiere), baritone Andrew Sauvageau, soprano Lindsay Kesselman, D.C.’s vital American Youth Chorus, and Bayolo’s Great Noise Ensemble with the chamber vocal ensemble Third Practice. La Commedia is presented by the National Gallery of Art as a follow up to its successful 2010 presentation of Andriessen’s De Materie and, like all National Gallery of Art performances, this concert is presented free of charge on a first come, first served basis. Duration: 100 minutes.

“Monica Germino, a vividly personable player on the electric and ‘normal’ violin, works with a sound engineer to transform her violin at one moment into a colossally deep double bass, the next into a wailing electric guitar…a tour-de-force of slowly rising intensity.” — Daily Telegraph (UK)

Three expert interpretors of Andriessen’s work — Cristina Zavalloni (voice), Monica Germino (violin), and Andrea Rebaudengo (piano) — come together for an intimate evening of Andriessen’s chamber music, alongside music by composers who have influenced him. Zavalloni, for whom the piece was written, sings Letters from Cathy; Germino performs an encore of XENIA; Rebaudengo performs Base, for piano left hand. They round out the program with John Cage’s 1950 work, Six Melodies, for violin and keyboard, an art song from Stravinsky (The owl and the pussycat), and Beatles Songs, Andriessen’s arrangements of songs by John Lennon and Paul McCartney.

This program draws on two parallel threads from Andriessen’s work—his writing for piano and the influence of jazz—offering D.C.-area audiences a first listen to three U.S. premieres. The first half of the program features Great Noise Ensemble pianists Molly Orlando and Francesca Hurst performing Image de Moreau, a piano collection that spans Andriessen’s entire career. Atlas’s new music and jazz programs collide for the second half of the concert, with Brad Linde Ensemble’s tour of Andriessen’s eclectic and unusual approach to jazz: The Family Revisited, a suite arrangement o f a film score Andriessen wrote early in his career, Monument for Graettinger, On Jimmy Yancey, an ode to the boogie-woogie pianist, and That Happens in Vietnam. Presented by Atlas Performing Arts Center. Estimated duration: 75-90 minutes.

Bang on a Can co-founders Michael Gordon, David Lang, and Julia Wolfe—perhaps Andriessen’s most prominent protégés—bring their two-decade relationship with the honored composer to a program focused on music for and from the collective, performed by the Bang on a Can All-Stars. Representing the new is Andriessen’s recent work, Life, a four-movement piece composed for the All-Stars, with films by Marijke van Warmerdam. Representing the old is Workers Union, perhaps Andriessen’s most well-known work. Gordon, Lang, and Wolfe contribute pieces to the program, along with a piece by the late Steve Martland, whose inclusion also serves as a memor ial after his sudden passing last year. Presented by Atlas Performing Arts Center. Duration: 120 minutes.

Praised by The Strad Magazine for “high-octane” performances, the Aeolus Quartet (currently in residence at Juilliard) returns to Shenandoah University to tackle Andriessen’s complete string quartets plus Raadsels Riddle for solo violin and La Voce for solo cello. Though Andriessen is perhaps better known for large mixed ensemble pieces, his three string quartets—whether amplified or acoustic—offer an interesting and unusual cross-section of his output, spanning three decades. Duration: 60 minutes.