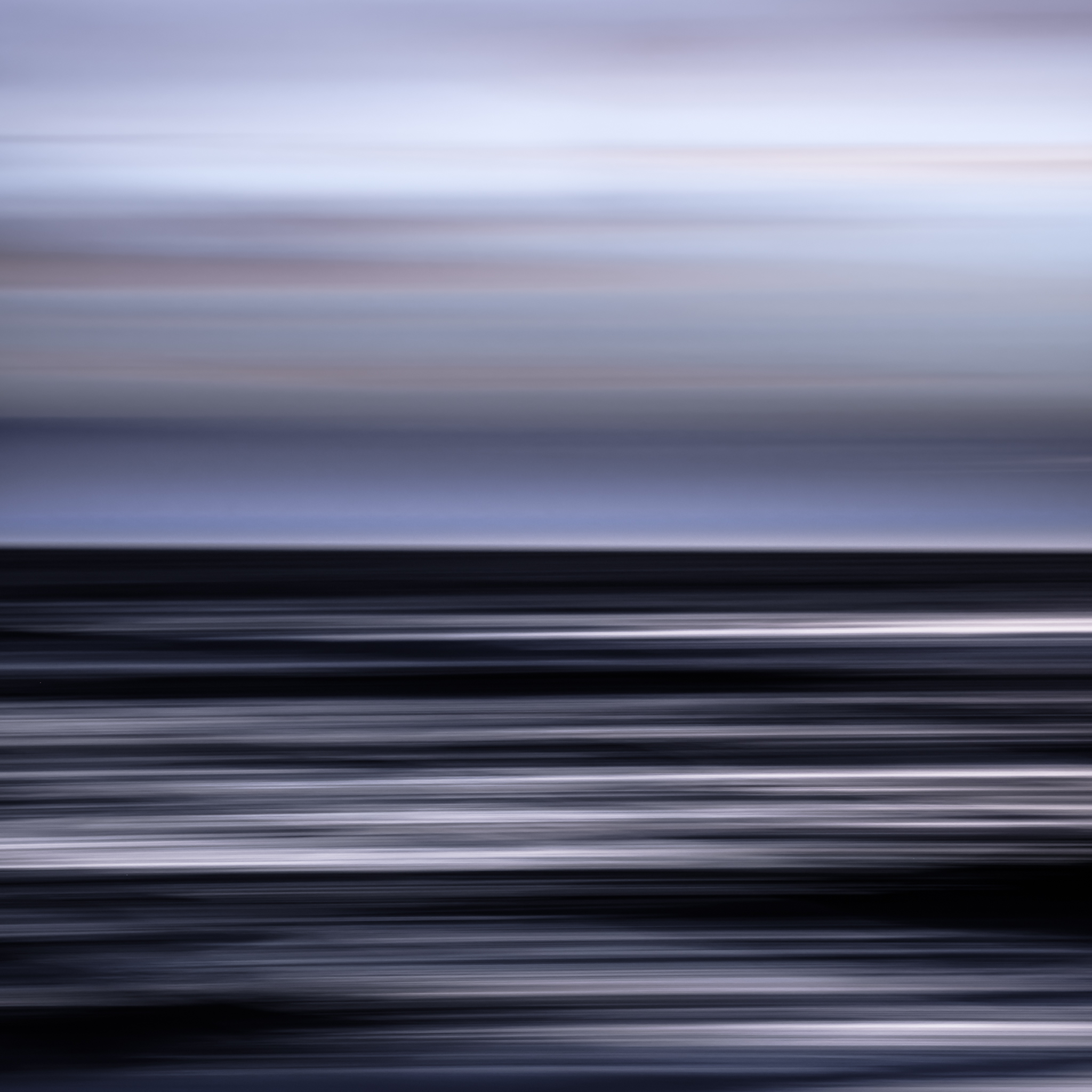 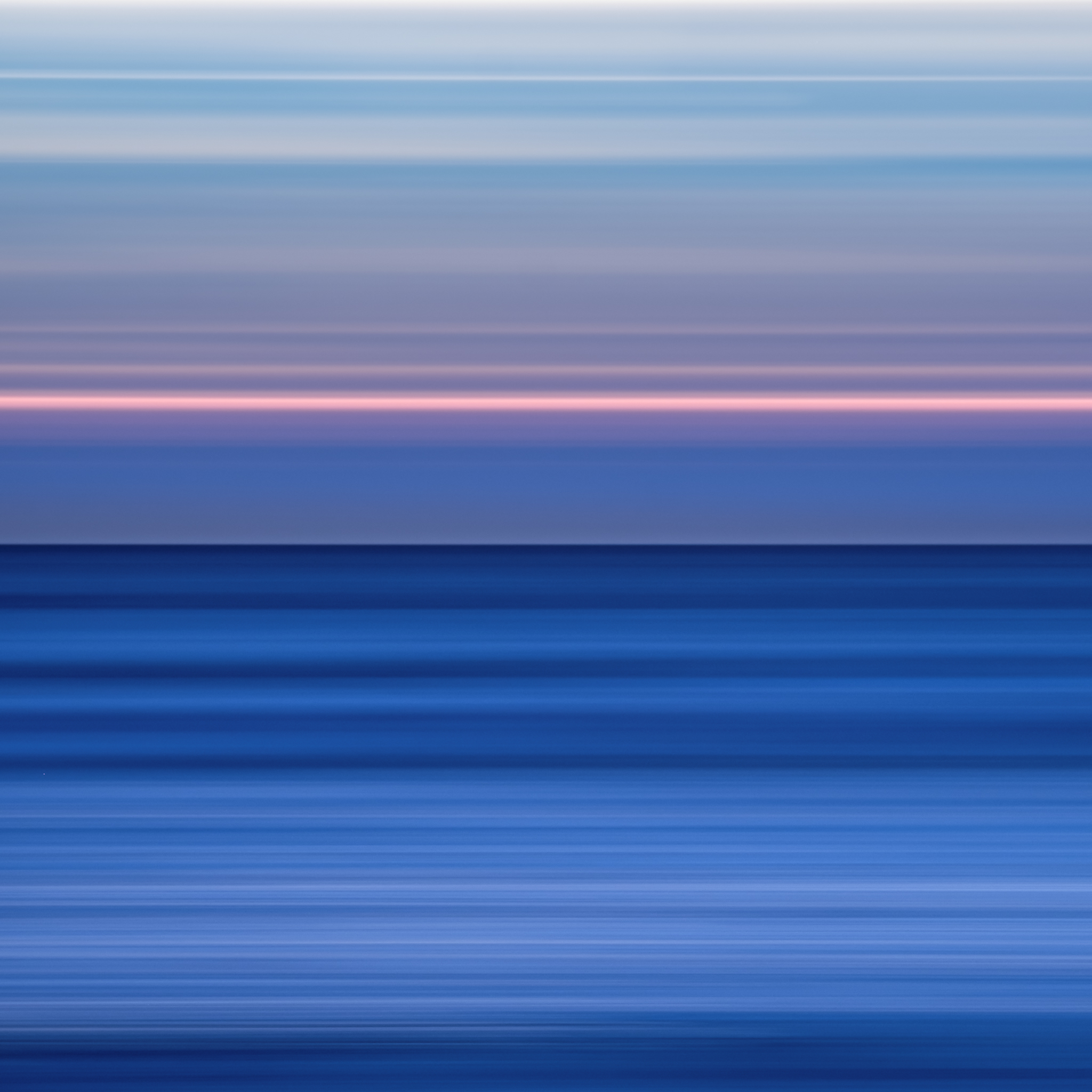 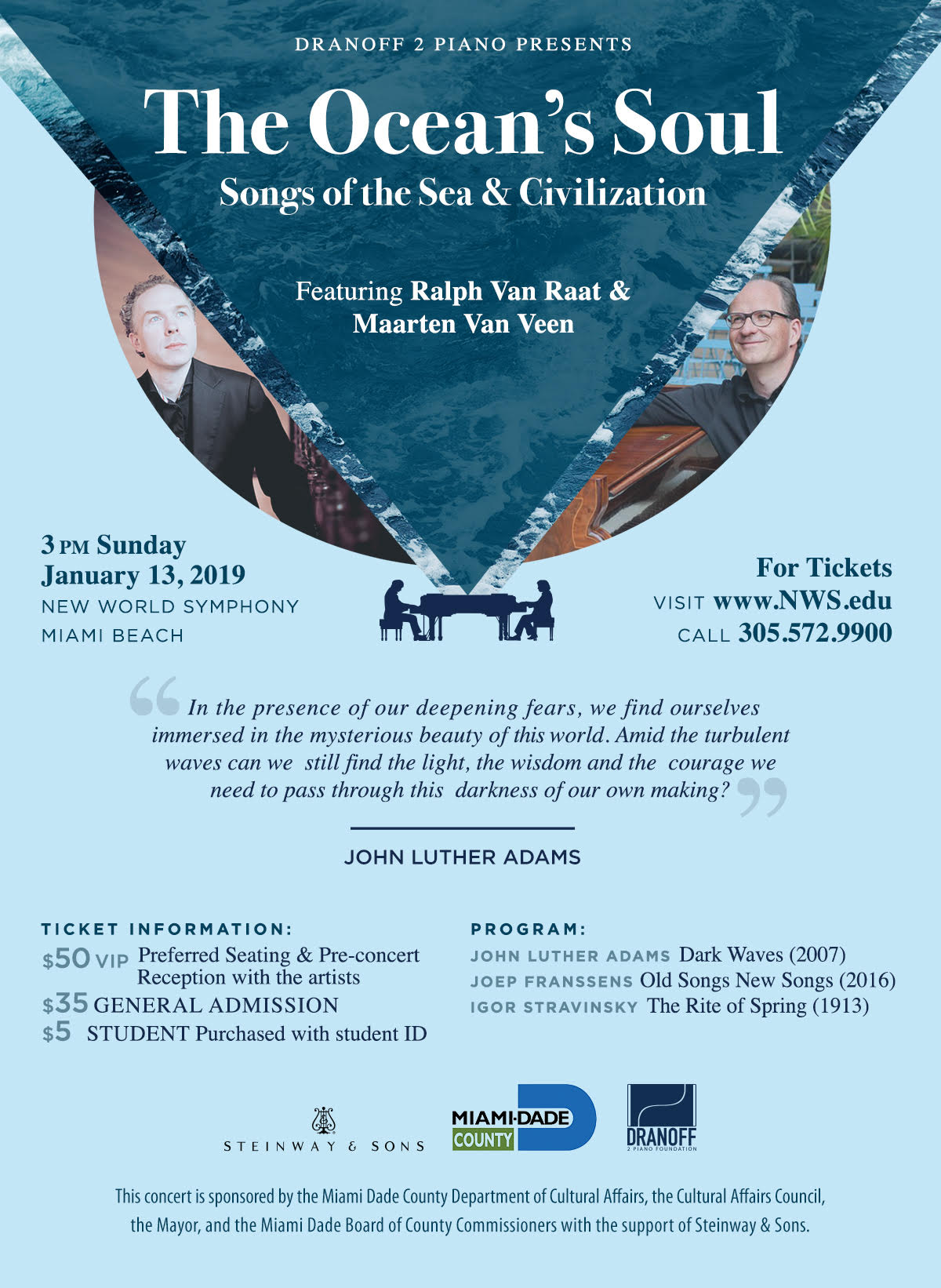 An immersive projection of minimalist seascapes by Dutch photographer Johannes Bosgra will accompany the piece “Dark Waves” at “The Ocean’s Soul – Songs of the Sea & Civilization” on Sunday the 13th of January in Miami’s New World Center. The seascapes flow slowly into one another in the video projection, just like in John Luther Adams’ “Dark Waves the groups of notes flow into one another, both in the piano’s and in the electronic music. Dutch pianists Maarten van Veen & Ralph van Raat are invited by the Dranoff 2 Piano Foundation to play a program of music inspired by humanity’s relationship to our oceans in this concert.

Johannes Bosgra (1979, NL) travelled around the world to the most desolate places to capture the essence of colors, forms and shapes of oceans and seas into minimalist seascapes in his series “Stripes.” He uses contemporary classical music as an inspiration in the creation of his photographic work and explores the links between classical music and visual art. Additionally, Bosgra plays the piano himself. Bosgra received awards by the International Photography Awards, Black & White Spider Awards and the Moscow International Foto Awards. He was president of the classical music festival Hortus Festival and has worked for the North Netherlands Symphony Orchestra. More information: https://www.johannesbosgra.com/works/#/strepen/

Frank Gehry designed the New World Center to make video an integral part of a concert experience. For this Gehry made giant curved sails above the stage in his signature twisting and organic style, on which the video is projected. The New World Center is situated in Miami Beach, close to the ocean.

In his Stripes (2018) series, Bosgra created images that exist in the liminal space between abstraction and representation. Likewise, “Dark Waves” is one of John Luther Adams more abstract pieces, it’s like a total feeling of waves. It sculpts layer upon layer into expansive waves of sound. The waves crest together in a tsunami of sound that engulf you.

The depictions of the sea reveal Bosgra’s deep connection to the representation of the sea by photographer Hiroshi Sugimoto and to the abstract work of the artist Gerhard Richter. To make the work, he employs an extremely precise and time-consuming process with his camera. Bosgra embraces the unpredictability of the colors, forms, lines and shapes that this photography technique yields. The result is a minimalist geometric composition of straight lines that neither has a large number of representational elements nor commits to its abstraction. Combined together, the two elements yield images that shift before the viewers eyes.

Pianist and conductor Maarten van Veen was a winner, along with his brother Jeroen van Veen, of the Dranoff International 2 Piano Competition in 1995. He studied at the conservatories of Utrecht, Prague and the Mozart Academy. He was early to specialize himself in the performance of contemporary music besides the classical repertoire. In 1998 he worked with Robert Craft on Stravinsky’s piano repertoire, and recorded” Les Noces” with the latter in the Abbey studios, London. The New York Times stated this recording as “the best recording ever [of the Stravinsky.]” Maarten has performed all over Europe and played with different orchestras and conductors, like Peter Eotvos, Howard Williams, Arie van Beek, Neal Stulberg and Robert Craft. He founded the International Piano Quartet (4 pianos) and played many concerts in the U.S.A. and Canada. In the Netherlands, Van Veen is member of the artistic board of the DoelenEnsemble and the Hortus Chamber, which offer programs with a panoramic view of the 20th and 21st centuries. Maarten van Veen is increasingly acclaimed as one of the most innovative and powerful musicians of today. Noted for the originality of his programming, critics have praised the intensity of interpretation as well the emotional impact he brings to the audience.

Steinway artist Ralph van Raat has been completely fascinated by classical music of the twentieth century since the age of 14. Although his repertoire ranges from Bach to Boulez, his primary focus has always been on composers dating from Debussy, Bartók and Ives to present day masters. Van Raat helps audiences identify with modern day composers by adhering to a classical approach: he firmly believes that a strong sense of classical structure as well as a refinement of tone is essential in conveying the logic and poetry of any music, certainly including his repertoire of choice.

Igor Stravinsky: The Rite of Spring (1913) with video projection of culture and the environment

“As Kandinsky said in Über das Geistige in der Kunst, music has been for some centuries the art which has devoted itself not to the reproduction ofnatural phenomena, but rather to the expression of the artist’s soul, in musical sound. Music is the art with the highest abstraction and able to convey emotions in the most direct way. I captured the seascapes I saw around the world in a minimalist, abstract form to try to convey the deep emotions that classical music evoke within me. The extreme precision that I apply in the process of creating the work, feels like playing a musical instrument and therefore lets me feel the emotions that I want to express in my images.” Johannes Bosgra