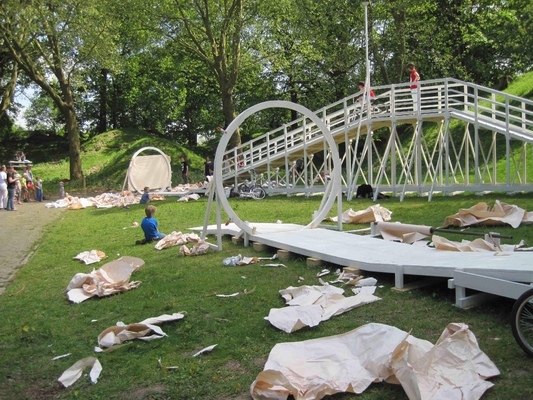 This year, Saskia Janssen is resident at the international studio and curatorial program in Brooklyn

This year, Saskia Janssen is resident at the international studio and curatorial program in Brooklyn

Saskia Janssen mixes a variety of media with an anthropological approach in her socially engaged site-specific works. She has collaborated with sailors, nightclub singers, hard drug users, Buddhists, and psychiatric hospital patients and inmates. The outcomes of these collaborations have taken the form of installations, recorded albums, drawings, performances and printed publications. Together with George Korsmit, in 2005 she established The Rainbow Soulclub, an art studio in an Amsterdam shelter for long-term drug users. Since then, they have run a weekly program in the studio, often together with their art students.

Saskia Janssen (born 1968 Hertogenbosch, The Netherlands) lives and works in Amsterdam. She graduated from the Royal Academy of Fine Art in The Hague and was a resident at the Rijksakademie in 1996 and 1997. Exhibitions include Diamonds in the Sky, Museum Het Dolhuys, Haarlem; A Glass of Water (Some Objects on the Path to Enlightenment), Ellen de Bruijne PROJECTS, Amsterdam; The Dutch Identity?, Museum De Paviljoens, Almere; and Monument for Invisible Particles, commission for the Bonairian tax building for the Central Government Real Estate Agency. Janssen is represented by Ellen de Bruijne PROJECTS and currently teaches at de Gerrit Rietveld Academy in Amsterdam.

The International Studio & Curatorial Program (ISCP) is a leading nonprofit, residency-based contemporary art institution for emerging to mid-career artists and curators from around the world. Founded in 1994, ISCP has hosted over 1,900 artists and curators from more than 62 countries, including the United States. In 2008, ISCP moved from Manhattan to East Williamsburg, Brooklyn to an 18,000 square-foot building constructed in 1901. This move expanded ISCP’s facilities to 35 studios, an exhibition gallery and a project space.
To advance its core mission of supporting artists in producing and exhibiting a wide range of contemporary, often experimental, artistic approaches, ISCP annually presents a series of innovative exhibitions and public programs both on- and off-site. ISCP’s programming engages audiences in meaningful ways while fostering the institution’s relationship to its community. Each year, over 100 artists and curators are in residence at ISCP and approximately 10,000 individuals attend ISCP’s public programs.