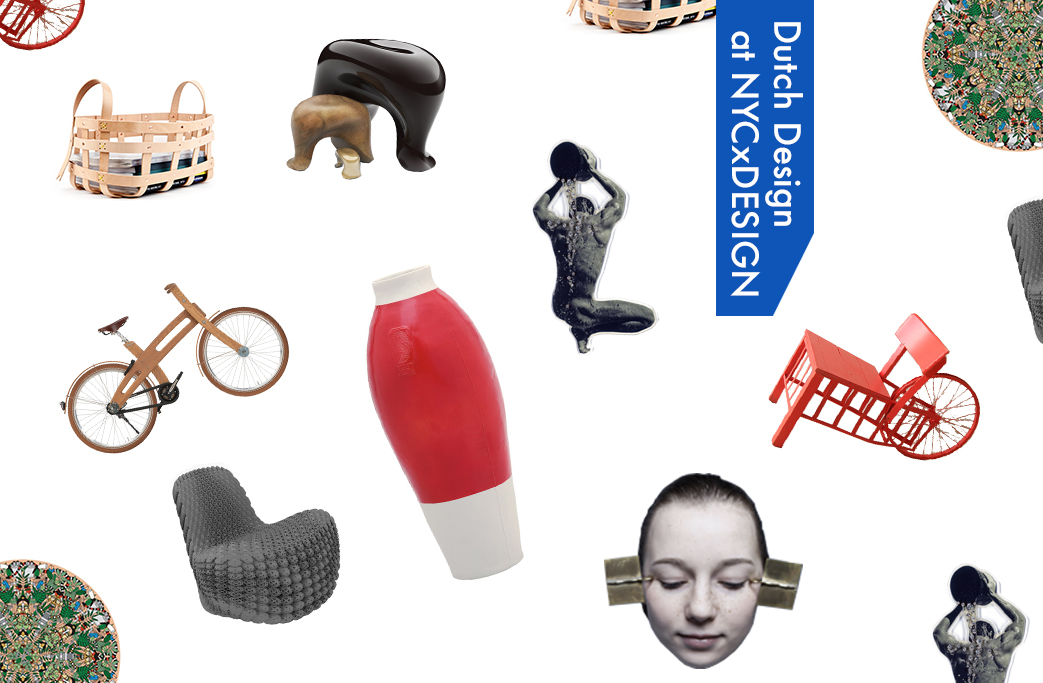 A wide variety of Dutch Design showcases will take place during NYCxDesign. These showcases will celebrate the best that Dutch Design has to offer, from young designers fresh out of the Design Academy Eindhoven, to renowned talents and successful international companies.

A wide variety of Dutch Design showcases will take place during NYCxDESIGN, New York City’s annual city-wide celebration of Design (May 9-20). These showcases will celebrate the best that Dutch Design has to offer, from young designers fresh out of the Design Academy Eindhoven, to renowned talents and successful international companies.

The Netherlands has a long tradition of design excellence and a high commitment to quality and a pragmatic approach. Initially the Netherlands was primarily known for its graphic design, but when contemporary Dutch Design took a flight in the early nineties with the arrival of Droog Design and many young new talents, the world got to know the Netherlands as a hotbed for design innovation and experimentation. The Consulate General of the Netherlands is proud to see so many Dutch Design showcases scheduled for the month of May, the official design month as announced by the City of New York in 2012.

“We’re pleased to see so many of our country’s most exciting innovators, game-changing designers and design companies in New York during NYCxDESIGN,”said Rob de Vos, Consul-General of the Netherlands in New York. “They represent the results of years of investment in top tier, innovative education that has led to artistic and commercial successes around the world. New York City as the Design Capital of the World remains the most exciting cultural and economic market to present this talent on an international stage.”

NYCxDESIGN represents the innovative and cutting-edge design made and shown in New York City, so it comes as no surprise to see such strong representation from the Netherlands this year, ” said Willy Wong, Chief Creative Officer at NYC&Company, the City’s official marketing organization, which produces the annual event. “It’s great to see Dutch Design so prominently showcased throughout the city, as NYCxDESIGN celebrates New York City’s vibrant and truly international design community.”

The internationally-acclaimed Design Academy Eindhoven has produced many of the recent Dutch Design talents and will present the U.S. debut of the exhibition ‘Self Unself’ at the Collective 2 Design Fair (May 8-11). This exhibition began as a theme of the Academy’s 2013 Graduation Show, and has been presented in various forms at the Van Abbemuseum during the 2013 Dutch Design Week, the 2013/2014 Loft Creative Festival in Shenzhen, China, and at the 2014 Salone del Mobile in Milan. The exhibition presents all new student work that explores the boundaries of design, and work that has moved beyond the production of objects to embrace other forms of expression.  The theme Self Unself is dualistic in itself, and it creates room for thought and discussion. In the exhibition in New York, two related projects are placed next to each other. They are not necessarily opposites or counterpoints, but they are connected in meaning, material or medium. They represent different approaches to the same topic. For example, mixing and marrying, storytelling with a twist and intimacy on the page.

Also at the Collective 2 Design Fair, a solo exhibition of works by Hella Jongerius will be presented by guest curators Murray Moss and Franklin Getchell of Moss Bureau. The exhibition presents a highly personal selection of representative works by this internationally acclaimed designer, who for over twenty years has explored the crossovers between industrial design and crafts.

The Museum of Arts and Design will present the exhibition Multiple Exposures: Jewelry and Photography, the first exhibition to focus on photo-jewelry—or jewelry that incorporates photography as an integral element (May 13-September 14). The exhibition will present innovative, thought-provoking creations by 80 international artists, and will prominently feature the work of ten Dutch artists as pioneers and leaders in the field: Gijs Bakker, Célio Braga, Peter Deckers, Jantje Fleischhut, Herman Hermsen, Iris Nieuwenburg, Ruudt Peters, Gabriela Sanchez, Mecky van den Brink, and Truike Verdegaal. The museum also still has on view the celebrated and groundbreaking exhibition Out of Hand: Materializing the Postdigital, which includes innovative examples of digital design and production by many Dutch designers (on view until June 1).

The Friedman Benda Gallery in Chelsea will present Joris Laarman Lab: Bits and Crafts, a groundbreaking exhibition that presents the Dutch designer’s explorations into digital fabrication (May 1 – June 7). According to the gallery, Laarman employs cutting edge tools to enable new shapes, fabrication and methods, while his enduring signature is manifested through a combination of both technology and craftsmanship. His works are a distinct convergence of technological innovation and surprising beauty.

Another Dutch designer known for exploring craftsmanship is Aldo Bakker. The SoHo gallery and boutique Atelier Courbet will present the first New York solo exhibition by the designer, and his collaborations with master-craftsmen in wood crafting, copper, silversmith and ceramics (May 10-June 30). Both new limited editions, as well as earlier work will be on view.

Streetlife, producer of sustainable materials and outdoor, vandal-proof constructions for public space, is organizing a seminar targeting landscape architects at the Trespa Design Centre. During this seminar, the latest European and Dutch innovations regarding street furniture, tree products and pedestrian bridges will be presented.

Sustainable design entrepreneur Robbert Zoon will present GOED at GGrippo art + design in Williamsburg, Brooklyn (May 9-18). This showcase will include the world premiere of the first electric wooden bike by Bough Bikes, and other eco-friendly products such as a sustainable dance floor by Energy Floors, and high-end bags made from recycled conveyor belts by KAZMOK.

Another designer with Dutch roots is Alissia Melka-Teichroew, a Design Academy Eindhoven alumnus and founder of the New York-based byAMT. Her Strap Collection will be exhibited at INTRO/NY (May 15-19), a cutting edge design showcase of leading brands.

The presentation by the Design Academy Eindhoven and the Hella Jongerius solo exhibition by Moss Bureau at Collective 2 Design Fair are supported by Dutch Culture USA, the cultural program of the Consulate General of the Netherlands in New York. More info: https://www.dutchcultureusa.com.

From the Dutch Masters Through tomorrow’s cutting edge innovation, sign up to receive Dutch Culture USA’s monthly newsletter to learn more about Dutch cultural events in the United States at our website: dutchcultureusa.com