From December 6th through December 9th Art Basel Miami Beach will feature over 200 of the world’s leading international Modern and contemporary art galleries, who will display artworks by over 4,000 artists. Artworks include paintings, sculptures, installations, photography, film, video, and digital art. Visitors can find works ranging from editioned pieces by young artists to museum-calibre masterpieces. This year, four Dutch galleries will take centre stage at the 17th edition of Art Basel in the Miami Beach Convention Center.

Boers-Li Gallery has been showing Chinese and western contemporary art in Beijing since 2005. In October 2017, the gallery opened a New York branch on the Upper East Side of the City. The gallery program focuses particularly on researching and elucidating the various historical trends and movements in Chinese art from the 1970s through the ‘90s. They maintain close and productive relationships with the estates of many of the most significant artists from this era, and have, over the years, developed a constructive role promoting recognition and lending expertise to museums and scholarly institutions that show and study the art and artists of this period. 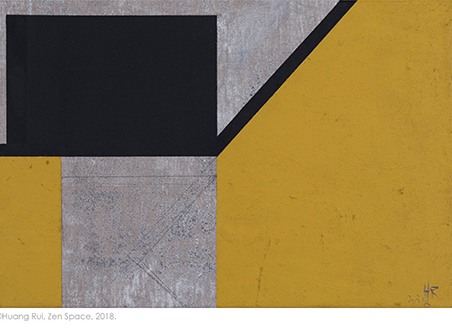 Boers-Li Gallery was founded in 2005 by Waling Boers, a Dutch curator who had previously established connections to Chinese artists as the founder of the non-profit art space Büro Friedrich in Berlin, and Chinese curator Pi Li. Initially called Universal Studio-Beijing, they soon changed the name to Boers-Li Gallery, and in 2010 moved into Beijing’s 798 Art Zone. In 2012, Waling Boers became the sole owner of the gallery. In 2016, he was joined as a partner by Jia Wei, an expert on Chinese art and former head of the Beijing Poly Auction art department.

Broers-Li Gallery represents successive generations of internationally operating Chinese artists and seeks to open dialogues between the different stages of Chinese contemporary art: the “underground” period of No Name Group and Star Group from the 1970s, the Beijing Abstract Movement from the early 1980s, the ’85 New Wave Movement, the New Media Movement in the 1990s, as well as the younger generations: the so-called “Millennials” and “Post-Internet.”

Grimm Gallery presents “Half-forgotten Dream,” a solo presentation for this year’s edition of Art Basel Miami with new works by Claudia Martínez Garay. Martínez Garay’s work combines standing murals, geometric forms, and ceramic works to reflect on the idea of sacrifice, invoking a strong identification with indigenous cultures. The artist has created this installation as part of an ongoing process of inquiry into the life of cultural artefacts, how they are created, preserved and circulated.

Martínez Garay looks to the pre-Colombian cultures of South America, with a focus on representing and interpreting the visual language of Incan ceremonial traditions. Geometric forms are pulled from the Incanato, or Incan elite, which are postulated to be symbols ranging from markers of social class to glyphs from unknown writing systems. In one section of the installation, the artist has created a ceramic tableau based on a drawing by the Incan nobleman Guaman Poma de Ayala in which a hand, hanging on the wall, reprimands little ceramic spirits below for failing to bring rain.

Claudia Martínez Garay’s work is in dialogue with the impact of colonialism on cultural artefacts, questioning how cultural artefacts are created, preserved, transformed and circulated. Investigating objects’ journeys between their origin and destination, she suggests that the information accrued in these transitory spaces holds value and power. 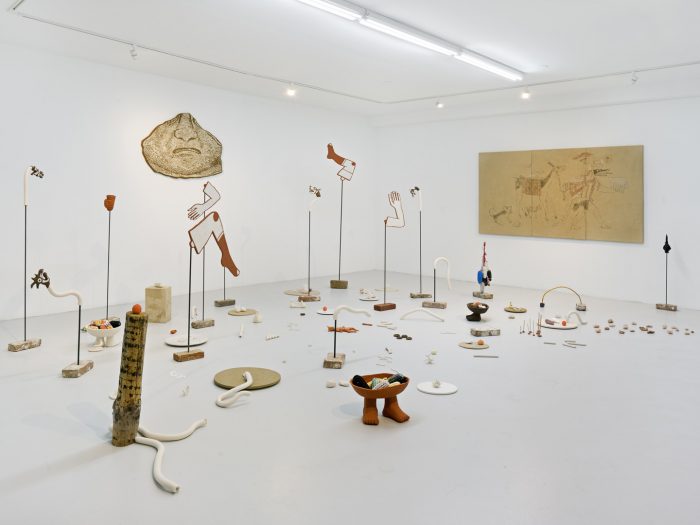 Grimm is a contemporary art gallery representing over thirty international artists. Since its establishment in 2005, it has been the gallery’s mission to represent and support the work of emerging and mid-career artists working in all media.

The 300 square meter main gallery space is located near the Amsterdam Museum Square. In 2016, GRIMM opened a second location in the heart of Amsterdam, offering both artists and visitors a new exhibition space in a classical canal house. In the spring of 2017 GRIMM opened a third venue in the Lower East Side of Manhattan, New York.

“La Casa Lobo” premiered at the 68th Berlinale in 2018, where it was awarded the Caligari Film Prize. Since then it was selected for several lm festivals around the world where León & Cociña won many awards and prizes, among which the Public Prize and Best Cinematography Prize at FicValdivia (Chili), Best Animated Feature Film at FicMonterry (Mexico), Best Latin American Film at Quito Latin American Film Festival (Ecuador), Jury Distinction at Annecy Film Festival (France), GNCR Prize Special Mention at FidMarseille (France) and the Special Mention of the Jury at Future Film Festival Bologna (Italy).

León & Cociña, whose work was also on show at the Latin American pavilion of the Venice Biennal 2013, the Whitechapel Gallery, the Guggenheim and KW Berlin, have been working on the creation of La Casa Lobo since 2013. The artist duo has since created a monumental feature film with an impressive duration of over 60 minutes. The film was shot frame by frame using digital photography, resulting in a single sequence shot. For the incredibly time-consuming production process, they initiated a nomadic studio project setting up temporary workshops in museums and other art institutions. Starting at Upstream Gallery in 2013 during their exhibition Flowers, the studio has travelled to Casa Maauad in Mexico City, Modern Art Museum Buenos Aires, Contemporary Art Museum of Chile and the Media Arts Biennale in Santiago de Chile among other locations. Each time, La Casa Lobo was presented as a work in progress. And by making the set part of the exhibition, the working process itself is turned into an artwork.

With their experimental films, León & Cociña create a new interpretation of the religious symbolism and magical rituals that are deeply rooted in the traditional culture of Latin America. 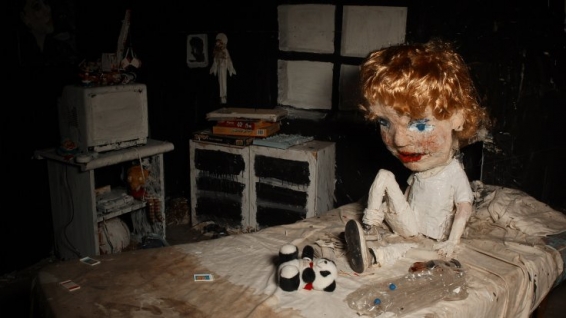 Upstream Gallery was established in 2003 by Nieck de Bruijn. The gallery quickly gained a credible international reputation among collectors, art institutions and critics, and is a perfect example of Amsterdam’s internationally renowned contribution to contemporary art. With a focus on radical, engaged, conceptual and post-internet art Upstream Gallery brings pioneering and critical work from artists from the Netherlands and abroad.

In 2007 Martijn Dijkstra joined the team as co-owner and the following year Upstream Gallery moved to a spacious location in Amsterdam’s hip neighbourhood De Pijp (The Pipe). In its ten years of its existence, the status of Upstream Gallery and its artists has shifted from talented and promising towards more well-known and established – but without losing its characteristic exciting nature. A mix of undiscovered young talent and bigger names keeps the exhibition programme fresh and interesting.

During Miami Art Week and Art Basel, Galerie Krinzinger will present a solo presentation by the Dutch Atelier van Lieshout. The solo presentation “CryptoFuturism” zeroes in on three key pieces of Atelier Van Lieshout’s recent practice, representing technology tampering with nature’s building blocks triggering societal changes. The works pivot between rational and irrational, pragmatic and poetic, functional and sculptural, reflecting on the early 20th century Italian futurists who broke with tradition to create a violently sped up advancement. Van Lieshout asks if technological developments can have a positive impact on today’s issues or should we dread these developments instead?

In his sculptures, Joep van Lieshout explores the boundaries of both ethics and art. His sculptures enter into a discourse with functionality, with form and its language, questioning the position of the artist. He has a fascination for the power that objects, machines and systems wield over humanity, and the (ir)relevance of the individual in the face of this power. Over the past three decades, Van Lieshout has established an oeuvre that explores the borders between sculpture, functional art and architecture, creating objects and installations, buildings and furniture, utopias and dystopias. 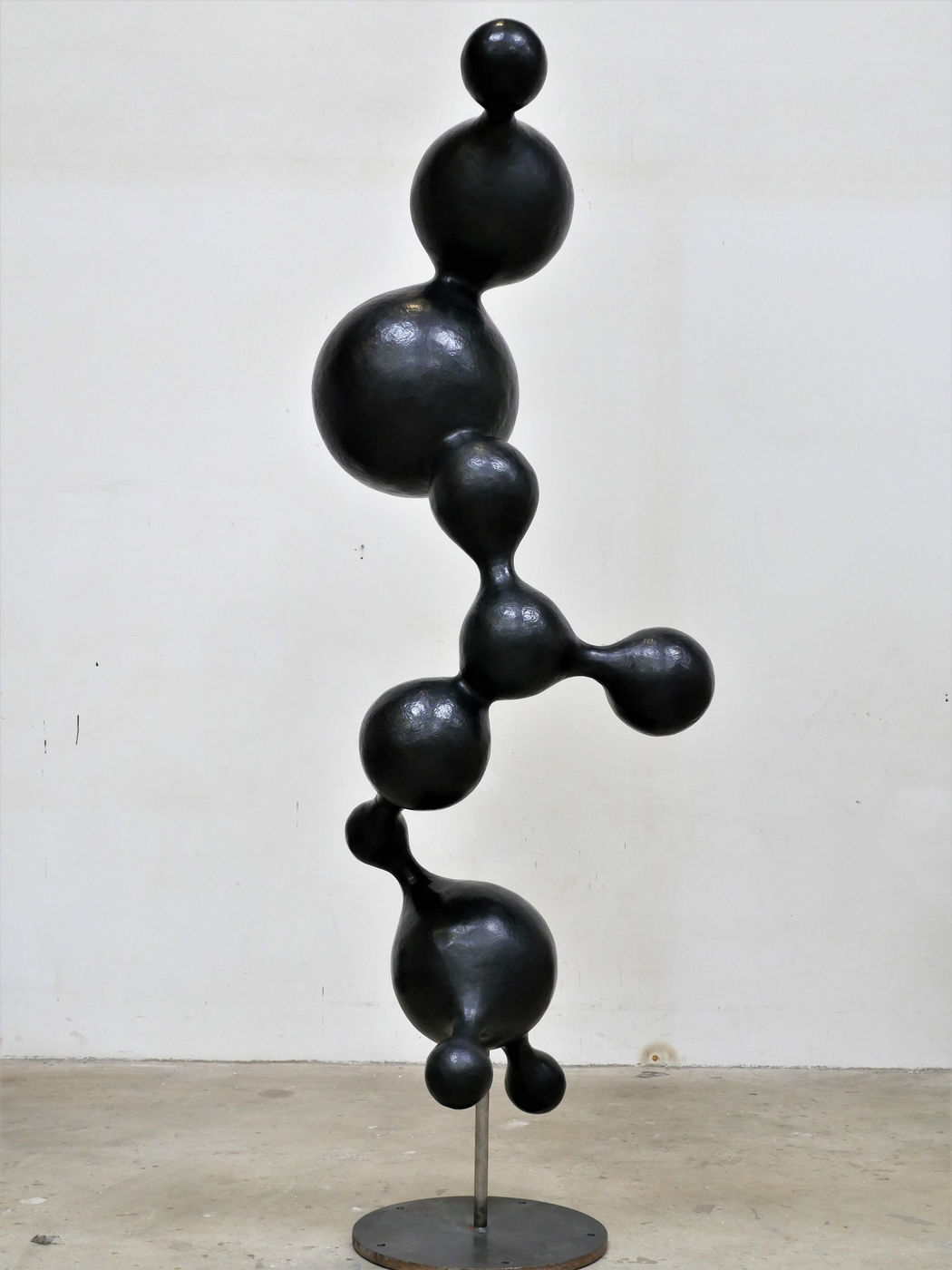 Galerie Krinzinger was founded in 1971 by arthistorian Dr. Ursula Krinzinger. Since then she had organized at least 500 exhibitions of national and international artists, mounting solo shows, group and thematic shows. The main interest and source of the gallery program stems, on the one hand, from international performance and body related art (Marina Abramovic since 1975, Chris Burden since 1992,…) based originally on Viennese actionism (Rudolf Schwarzkogler, Günter Brus, Hermann Nitsch, Otto Muehl since 1975). Additionally the gallery has been working with national and international artists (Martha Jungwirth, Jonathan Meese, Gavin Turk, Eva Schlegel, Mark Wallinger, Thomas Zipp) for over forty-five years.

Art Basel is the world’s premier modern and contemporary art fair, with the highest quality of modern and contemporary art works on show, from classic forms to pieces by the most advanced experimentalists. Art Basel in Miami Beach is the winter meeting place of the international art world. In this city where North America meets Latin America, Art Basel presents artwork from across the globe. Over 250 of the world’s leading galleries participate, attracting over 70,000 visitors each year.