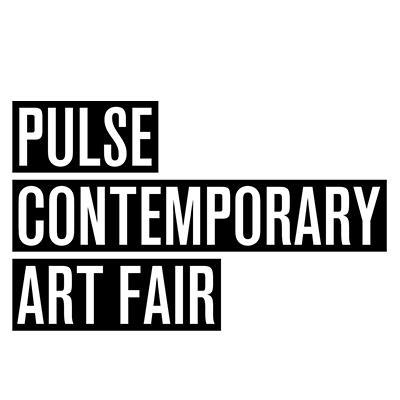 The 14th edition of PULSE in Miami marks the second year of Director Katelijne De Backer, under whose guidance brings a vibrant audience of art collectors, curators, and enthusiasts to a roster of over 70 galleries, including exhibitors from Canada, China, Denmark, France, Germany, Israel, Italy, Japan, Korea, Netherlands, Scotland, South Africa, Switzerland and Ukraine among others, and introducing 26 first time exhibitors at the fair. From site-specific installations, new video art, cutting edge painting and photography to multi-medium works, this year’s PULSE Miami Beach aims to showcase the breadth of artistic production happening across the globe.

NL=US Art is a private gallery and art consulting service that is dedicated to the promotion of emerging and established artists and the advancement of the visual arts in general. Other than the gallery, their services include private and corporate art advisory and the professional support for their visual artists. The agency is committed to enhancing the visibility and appreciation of contemporary art.

During Miami Art Week, NL=US Art will present Hans van Bentem, Arnout Killian, and Schilte & Portielje with the support of the Mondriaan Fund.

In recent years Van Bentem has had major shows in the Gemeente Museum, The Hague, Kampen Museum and Glass Museum Leerdam and has collaborated with amongst others Baccarat. His work can be found in private and public collections and in several Dutch Ministries and embassies.

Van Bentem graduated from the Royal Academy of Art The Hague, the Netherlands. He lives and works in Amsterdam, NL. 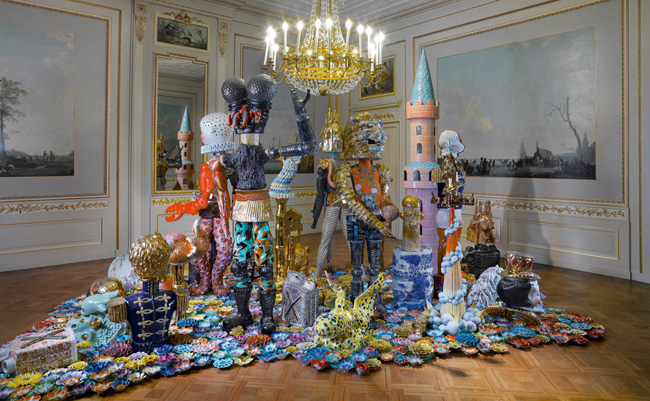 At first sight the paintings of Arnout Killian seem photo realistic. He either ‘zooms’ in, or gives the viewer vistas of spaces or places. The beauty of his work lies in the ‘in between’ moments he visualizes: rooms awaiting inhabitants, homes and landscapes devoid of people, deconstructed mannequins awaiting their next garb.
His newer paintings reach another level of abstraction: from afar they look like photos of carpeting; on closer inspection we find meticulously painted abstracts.
Killian gives meaning to seemingly uninteresting objects and moments by slightly manipulating reality. The paintings speak of quiet desolation, leaving the viewer with an eerie feeling of what will come next.

Killian’s work has been predominately exhibited in Europe. His most recent exhibition is ‘ENTER THE VOID’ in the More Museum in 2016. His work can be found in private, corporate and several museum collections.
Killian studied at the University of Amsterdam, the Gerrit Rietveld Academie, STEIM and the Rijksakademie van Beeldende Kunsten. He lives and works in Amsterdam. 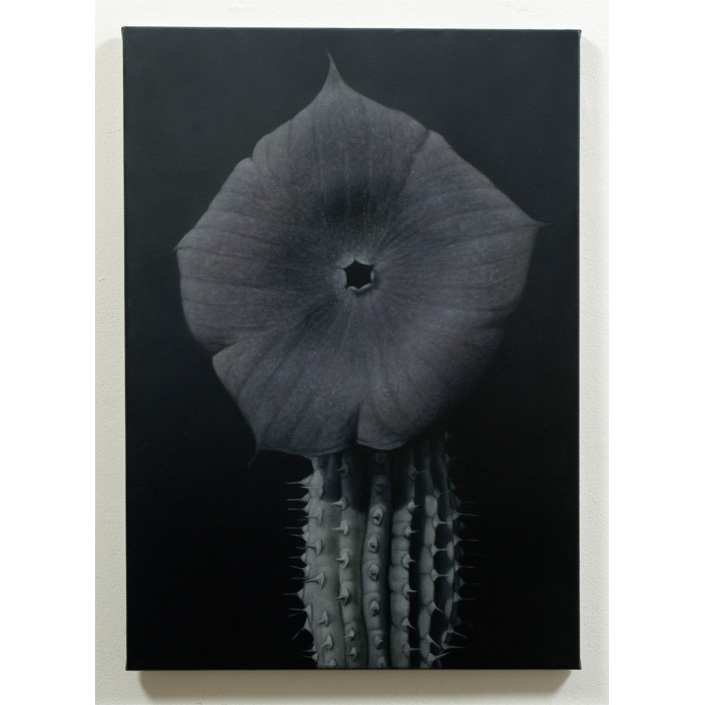 Huub Schilte and Jacqueline Portielje intensively explore the rich possibilities of the computer as an artistic medium and have been doing so since 1994. The computer is both their photography dark room as well as a drawing/painting tool. Their work has been featured in numerous exhibitions worldwide and has been included in numerous international private and corporate collections. Schilte Portielje work without a preconceived plan or subject. They both select fragments of images from a digitalized library they have built up over the years. With their selected image fragments, they compose their own dreamworld in black and white, filled with creatures who are endlessly captivating.
In their work Schilte Portielje constantly explore the boundaries between fantasy and reality, giving it a certain surreal quality. Could the composed black and white figures exist in real life? Are they in pleasure or pain? These questions make Schilte Portielje’s dreamworld one in which you would like to get lost forever. 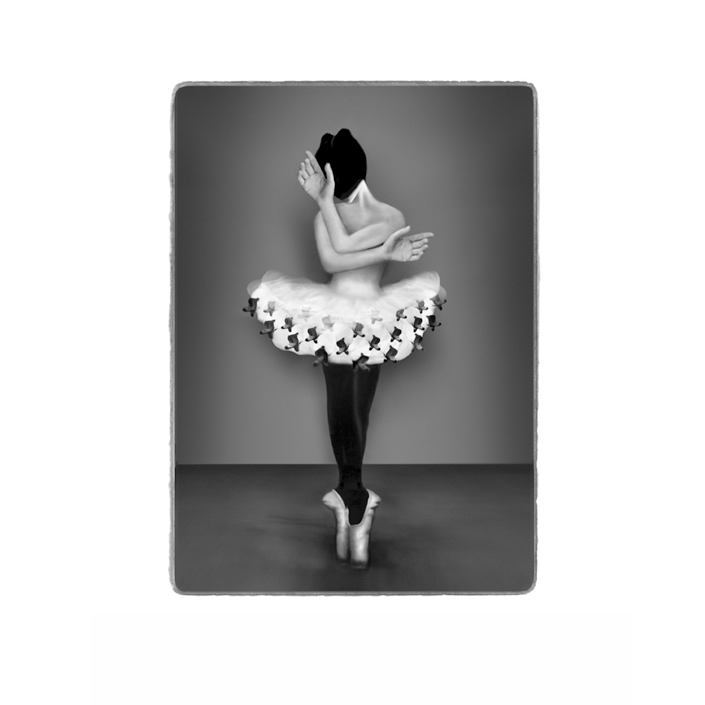 Founded in Amsterdam, The Netherlands, in 2007, Rademakers Gallery is a contemporary gallery that presents artworks by emerging and renowned artists at the interface of art, photography, fashion and design. The gallery represents established artists such as Jimmy Nelson, and Studio Job, while they also represent emerging artists such as Natasja van der Meer and Zuijderwijk Vergouwe. Rademakers Gallery emphasizes on ‘crossovers’ between the artistic disciplines, which is perfectly executed in every exhibition and show that Rademakers composes.

Iris van Herpen (1984), born in Wamel and currently living and working in The Netherlands, is an award winning fashion designer. She studied Fashion Design at ArtEZ university of the Arts in Arnhem and later interned at Alexander McQueen and Claudia Jongstra.

After graduating in 2006, she founded her own women’s fashion label in 2007. Only a few years later, in 2011, she became a member of the Parisian Chambre Syndicale de la Haute Couture.

Van Herpen is an innovator, utilising new technology such as 3D-printing as a garment construction technique in her designs. She once said, “There’s beauty in contrast, new terrains are found at the intersection between precision and chaos, art and science, the human touch and the high-tech, the artificial and the organic”. Her couture arise at the intersection of art, technology and fashion. In order to create new collections, she collaborates with various artists from different disciplines. She has worked with architects, musicians, photographers, filmmakers and choreographers. Her hard work is rewarded with numerous prizes. One of those prizes is the Johannes Vermeerprijs, the Dutch state prize for the arts, which she won in 2017.

Jan Koen Lomans (1978), born in Rotterdam and currently living and working in The Netherlands, studied at the St. Joost Arts Academy in Breda and Den Bosch and graduated in 2006 in textile tapestry.

Lomans has always been fascinated by the various stages of nature, such as birth, rebirth, transition and transience. In his work, he presents these themes in a range of ways, making them tangible in installations, where textile often is the chosen material. In order to transform ideas in to art, the artist does research and collaborates with various craftsmen, artists and scientists. This often leads to surprising production techniques. For example, in the series Mindful Cloud he worked with an enormous laser machine, the GraphixScan 1800 from the University of Wales, enabling him to create ‘melting structures’ with very large surfaces. Lomans combines research and technology with art, something that makes his work unique and innovative. His work has been bought by the Central Museum Utrecht.

Preta Wolzak, currently living and working in the Netherlands, studied monumental design at the Gerrit Rietveld Academy from 1986 until 1991.

From that moment on she has worked in various disciplines of applied arts; Wolzak is a creative all-rounder. Her work is not just unique and aesthetically pleasing, but also contains an important message. She dedicated a whole series to climate change and the way our foolish behaviour is ruining the environment. Lively, colourful and playful scenes are placed in arctic landscapes. They symbolize the way mankind treats the world as an amusement park which now threatens to spread to the last untouched places of this planet; the north and south poles. In her last series, Fighting Females, the artist casts a light on women who are hardly  mentioned in history books, but –all in their own way- had a big impact on the world. Through colorful portraits, constructed of leather, embroidery thread, wool, and glow-in-the-dark twine, Wolzak finds a way to celebrate women who fought for a better world.

Founded in 2005, PULSE Contemporary Art Fair is an established part of the annual art calendar and is recognized for providing its international community of emerging and established galleries with a dynamic platform for connecting with a global audience. PULSE offers visitors an engaging environment in which to discover and collect the most compelling contemporary art being produced today. For further information about PULSE Contemporary Art Fair, please visit http://www.pulseartfair.com