From June 5-8, Indie Week and the Music Trade Mission will take place in New York

Together with Dutch Music Export and M for Montreal, an official Indieweek showcase will be part of our second Dutch – American music industry trade mission. This showcase will take place on June 6th from 8PM – 12 AM at Pianos in NYC, and present upcoming and ‘export ready’ bands from the Netherlands: Amber Arcades and Klangstof will have the chance to introduce themselves to the US and international music industry professionals.

The stay of the musicians in New York will be closed with a showcase during Northside festival Brooklyn. Thursday, June 9th: Amber Arcades

Organized with the same goal, a mixer will be held prior to the showcase, organized by Sneak Attack Media, to bring representatives of the US, Dutch and Canadian music industry, as well as innovating tech related companies together. 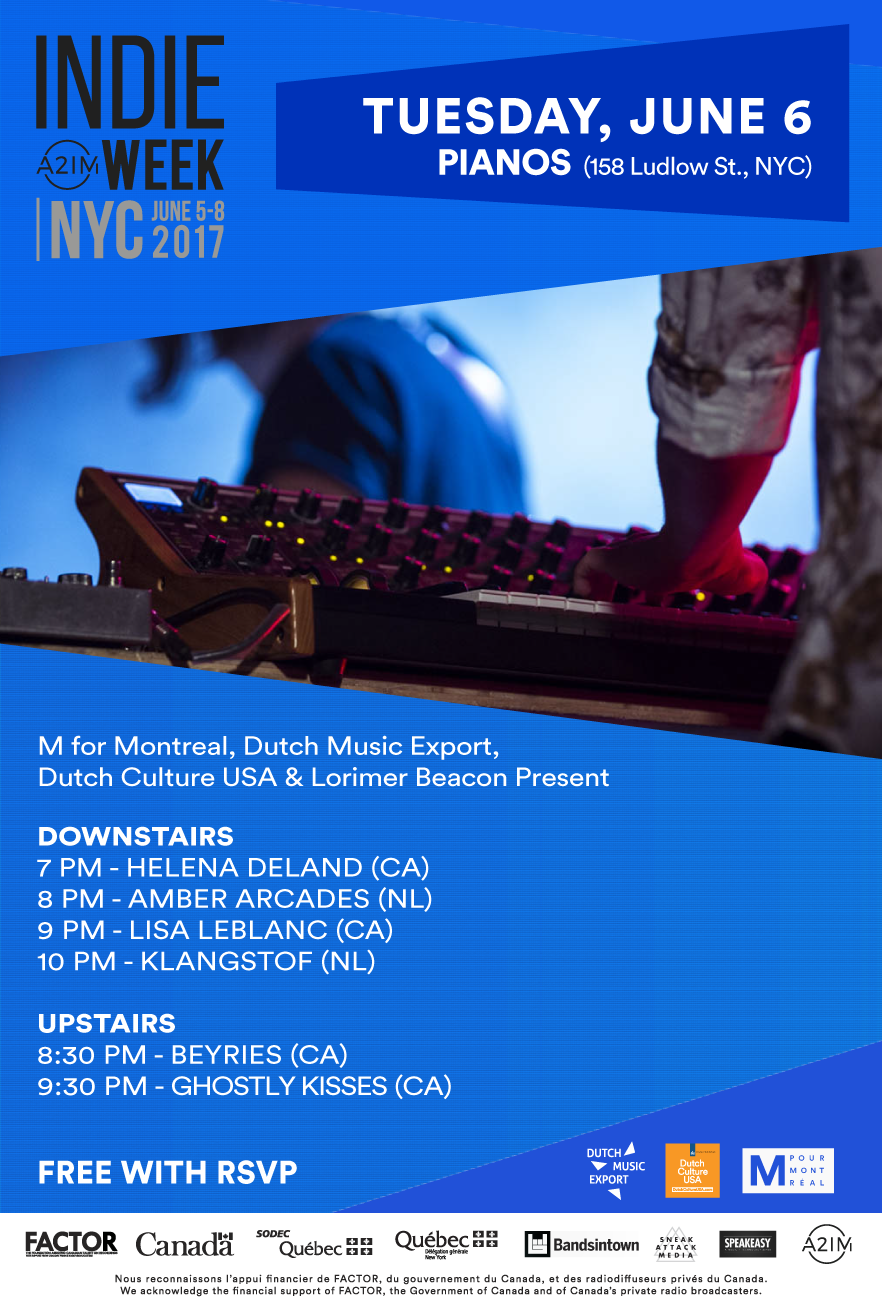 As a part of the trade mission, a number of roundtable discussions between Dutch managers and music representatives are organized, with American labels, agents, and publishers. Furthermore, so-called ‘field trips’ are planned to top music & tech companies throughout New York. There will also be one-on-one meetings held with New York City music industry professionals based on the wishes and needs of each of the delegates.

The Independent music community will come together from June 5th-8th 2017 in New York City for A2IM’s Indie Week presented by SoundExchange in partnership with BuzzAngle, CI, Merlin, Mitchell, Silberberg, & Knupp LLP, OneRPM, Reeperbahn. Indie Week is an international conference and networking event aimed at maximizing the global impact of Independent music. 2017’s Indie Week will be the largest to date and will include interactive panels, workshops, keynote speeches by Independent music luminaries, and one-on-one discussions.

The band is based in Amsterdam and signed to Mind of a Genius Records. The dreamy alt-indie of Amsterdam-based group Klangstof is the product of Norwegian singer/songwriter and producer Koen van de Wardt. His earliest inspiration was Radiohead’s OK Computer, which he used to hone his instrument-playing skills. Once he started writing his own material, he bolstered his songcraft abilities with studies at Hedmark University College in Norway. After a stint as bassist with Dutch indie band Moss, van de Wardt committed himself to the Klangstof project in 2014. After releasing the single “Hostage” in 2016, he was signed with Mind of a Genius, home to Zhu and Gallant. The sweeping tune incorporated the icy soundscapes favored by Radiohead in their late-era works, while also infusing some of the ethereal atmospherics of Sigur Rós and funky flourishes of Alt-J into the mix.

Klangstof is still touring through the US in June and beginning of July!

Amber Arcades, real naam Annelotte de Graaf, first started writing songs in 2010 while temporarily living in Philadelphia. Back in the Netherlands she put out a first EP in 2012 containing soft-voiced, melancholic folk ballads. Wanting to develop her sound and mature from the safe bedroom folk environment, she got in touch with producer Ben Greenberg to produce a collection of songs she had written over the years. In May 2015, de Graaf flew out to New York to record the songs in the Strange Weather recording studio in Brooklyn, backed by a band consisting of members of Real Estate, Quilt and Kevin Morby. The result is a record that is as dreamy and esoteric as it is gripping, presenting slightly off, floating pop melodies over a mixture of kraut-inspired drums, cutting guitars and fuzzed-out organs.

Lorimer Beacon is an international creative services company whose purpose is to provide arts organizations, cultural institutions, and their members’ workable solutions for their US strategies. Based in Brooklyn, New York, Lorimer Beacon was established in 2013 as a one-stop to facilitate a variety of value driven functions including creating and producing customized trade missions. Clients have included CIMA, Music Norway, and the Consulate General of the Netherlands. In addition to providing business solutions, we have produced live music showcases for international artists as stand alone events and in partnership with festivals such as SXSW, CMJ, and Northside Festival.

Sneak Attack Media is a boutique digital marketing and creative services company based in New York City. Since its inception in 2006, Sneak Attack has been dedicated to promoting music as well as lifestyle brands through unique strategies that extend beyond traditional promotion.

Bandsintown improves the concert-going experience for millions of fans around the world and helps thousands of artists of all sizes and genres to better connect with their core audience. The family of Bandsintown apps has attracted over 32 million concert-goers, reaches a global audience of 120 million music fans through Bandsintown Amplified and powers the tour dates for more than 400K artists around the world. Bandsintown has expanded to become the premiere destination where artists and fans connect.

Mission Statement: A2IM helps Independent music labels improve business by promoting access and parity through advocacy, education and connection-building with one another and affiliated businesses.

Dutch Music Export is an initiative by Fonds PodiumKunsten, Buma Cultuur and Stichting Popcoalitie, created with the foremost goal to bolster the international position of Dutch pop music on the world stage in a substantial and measurable way. Dutch Music Export advocates a structural and sustainable plan of action to back a productive congregation of internationally active and accomplished artists. DME accommodates artists and DJs who operate within a myriad of fields, as well as pop music viable for both mainstream and niche markets.

About M for Montreal

Founded in 2006 by Sébastien Nasra (Avalanche Productions), in collaboration with the legendary British festival programmer Martin Elbourne (Glastonbury Festival, The Great Escape and co-founder along with Peter Gabriel of the WOMAD Festival), M for Montreal is more than an annual event. “M” is a not-for-profit conducting year-round operations of showcasing artists and facilitating B2B opportunities. Since 2006, M for Montreal has carved out an enviable reputation at the heart of Montréal’s cultural life, while also playing an undeniable role as a business facilitator within the international music industry. For emerging Canadian artists and those who are developing their careers at a global level M is acting as a springboard on to international stages.