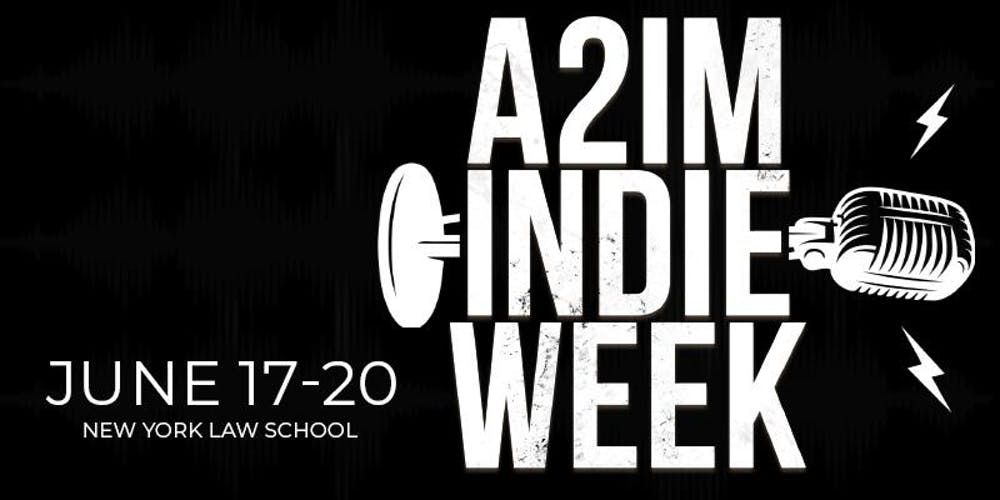 A Dutch delegation of music industry professionals, managers and label representatives will join the Independent music community from June 17-20 in New York City for A2IM’s Indie Week. A2IM Indie Week is a four-day international conference and networking event aimed at maximizing the global impact of Independent music. Indie Week includes keynotes, panels, receptions, exclusive networking sessions, and much more. A free Indie Week showcase featuring Canadian and Dutch live acts, will be be held at Pianos on June 18th. The Netherlands will feature YORI, Awkward I and Blanks. Indie Week attendance is part of an all-encompassing ‘music industry trade mission’, which will be organized in close collaboration with Dutch Music Export for the 4th year. Get to know these musicians in the descriptions below or read our recent blog post.

New York based Marauder will assist exceptional talent from The Netherlands in reaching a North American audience, with particular attention towards creating long-term career development. The program will consist of a number of roundtable discussions and one-on-one meetings with New York-based music representatives such as American labels, agents, and publishers. Furthermore, so-called ‘field trips’ are planned to top music & tech companies throughout New York. Marauder draws on a wealth of industry experience and works with a variety of musical projects from within the US and around the world, often as the first introduction to the North American market. In addition to working with a growing number of emerging artists, Marauder is the North American team for several international organizations and events, helping to not only create effective marketing strategies but also lead the implementation. Drawing on extensive knowledge of the North American market as well as highly specialized experience with music import, Marauder’s goal will be to increase American engagement with the Dutch music industry. 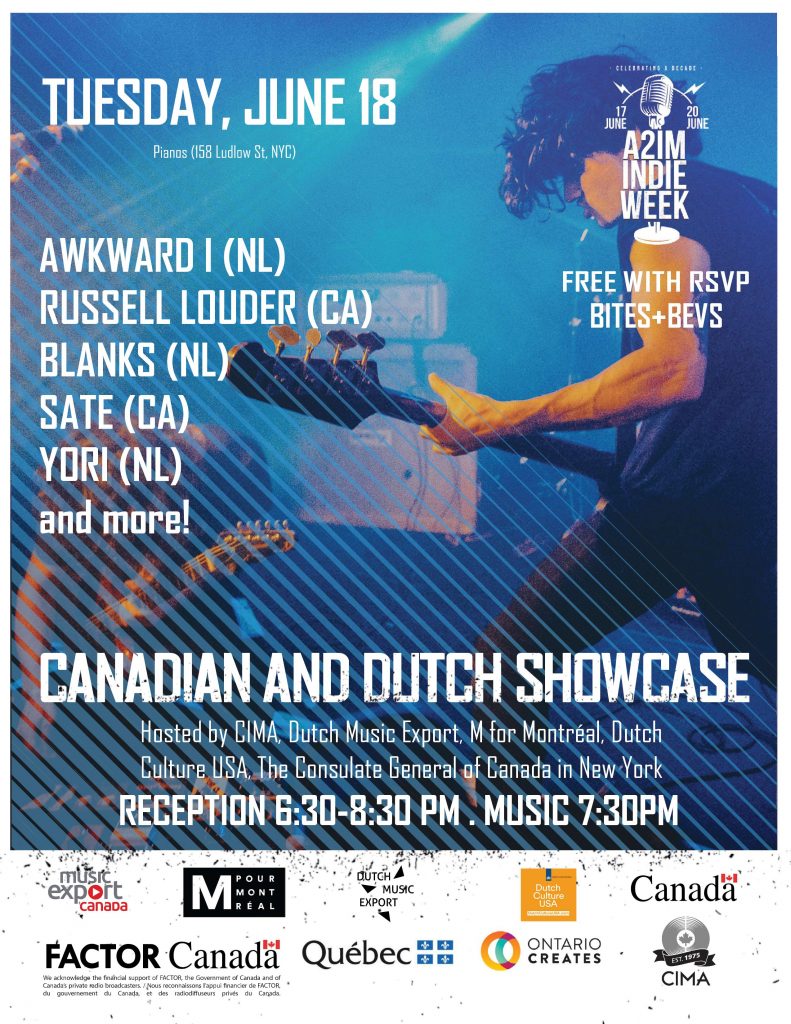 Think of music, happiness, and (over-)excited yelling and you will definitely think of Blanks. The tall Dutch musician rapidly built an international fanbase by his Youtube channel ‘Music by Blanks’ which he started at the age of 15 and has more than 750.000 subscribers these days. He’s not a traditional Youtuber, but a musician that uses Youtube to spread his unlimited love and passion for music. 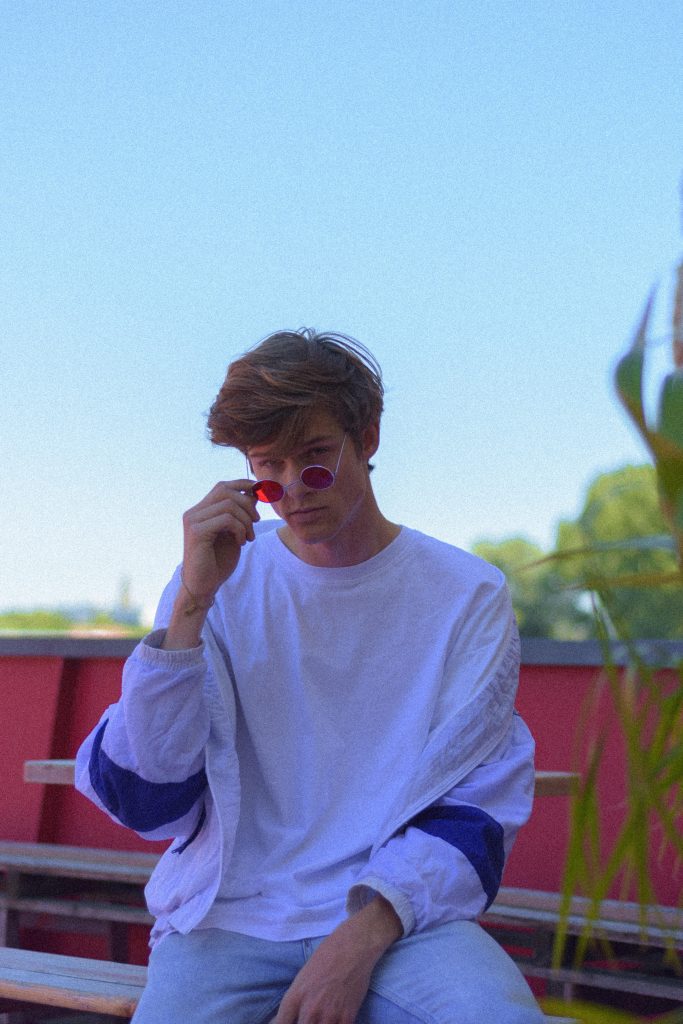 His “Style Swaps” have led to collaborations with mega DJ Armin Van Buuren, and more recently Ariana Grande gave him love for ‘Thank You, Next.’ While Blanks is focusing on original music more and more, maxi-single “Don’t Stop” can be seen as his most successful release so far. Previously Blanks performed during VidCon London as well as VEED Amsterdam.

YORI (Yori Swart) is known for her warm and soulful voice and can be quite distinct in her own unique way of guitar playing. She blends pop, blues and country into a rare finger-picking style. As a daughter of a classical guitarist she was eager to learn how to braid melodies and words together. Her hunger for melodies, lyrics, and alternative guitar tunings has resulted into a quirky but soulful songwriting style. Inspired by the spaciousness of Scandinavia and the warmth of the United States you can easily disappear into different worlds listening to her story’s.

AWKWARD i is the singer/songwriter pseudonym of Dutch musician and composer Djurre de Haan. About five years ago, De Haan had a firm grip on the road he paved for himself. He was able to swerve across many facets of life – both personal and professional – pretty much with playful abandon. Next to his deft songwriting acumen, De Haan carved himself a new niche as a composer for film and theatre. He flourished into a versatile, inter-disciplinary artist, earning him two award nominations in the process. Long story short, the future was looking fruitful and creative. Then out of the blue, De Haan found out he had– involuntarily – fathered a child. On KYD, De Haan reflects on his newly acquired role as a caretaker and tender, whilst secretly nourishing an inner wish to preserve his own childlike whims.  Read the full story on AWKWARD i’s website.

Marauder is the direct connection between its roster of international creative talent and North America’s leading media and music industry professionals. The firm’s unique advantage comes from custom-creating services for each client’s specific needs, with the ability to combine media outreach, special events, and marketing strategies into every project it takes on. A wide variety of artists and organizations work with Marauder including fine arts and economic development organizations; conferences and festivals; record labels from both established and emerging markets; music technology products; one-off events; and entirely self-funded artists. The firm positions its clients to grow by approaching each project with the dedication of a long-term partner. Marauder both produces and promotes Independent Venue Week in the US, and works with A2IM Indie Week, Reeperbahn Festival, and some of the most successful independent labels from around the world.

A2IM, the American Association for Independent Music, helps independent music labels improve business by promoting access and parity through advocacy, education and connection-building with one another and affiliated businesses. Membership currently includes a broad coalition of more than 430 Independently-owned American music labels. A2IM represents these independently owned small and medium-sized enterprises’ (SMEs) interests in the marketplace, in the media, on Capitol Hill, and as part of the global music community. In doing so, it supports a key segment of America’s creative class that represents America’s diverse musical cultural heritage. Billboard Magazine, using Nielsen SoundScan data, identified the Independent music label sector as 35.1 percent of the music industry’s U.S. recorded music sales market in 2016 based on copyright ownership, making Independent labels collectively the largest music industry sector.

Dutch Music Export is an initiative by Fonds PodiumKunsten, Buma Cultuur, and Stichting Popcoalitie, created with the foremost goal to bolster the international position of Dutch pop music on the world stage in a substantial and measurable way. Dutch Music Export advocates a structural and sustainable plan of action to back a productive congregation of internationally active and accomplished artists. DME accommodates artists and DJs who operate within a myriad of fields, as well as pop music viable for both mainstream and niche markets.

CIMA and M for Montreal

CIMA is the not-for-profit national trade association representing the English-language, Canadian-owned sector of the music industry. CIMA’s membership consists of Canadian-owned companies and representatives of Canadian-owned companies involved in every aspect of the music, sound recording and music-related industries. CIMA’s mandate is to develop and advocate policies and services that serve to support a strong and economically stable Canadian independent music and sound recording industry, ensuring the long-term development of the sector and to raise the profile of Canadian independent music both in Canada and around the world.

Founded in 2006 by Sébastien Nasra (Avalanche Productions), in collaboration with the legendary British festival programmer Martin Elbourne (Glastonbury Festival, The Great Escape and co-founder along with Peter Gabriel of the WOMAD Festival), M for Montreal is more than an annual event. “M” is a not-for-profit conducting year-round operations of showcasing artists and facilitating B2B opportunities. Since 2006, M for Montreal has carved out an enviable reputation at the heart of Montréal’s cultural life, while also playing an undeniable role as a business facilitator within the international music industry. For emerging Canadian artists and those who are developing their careers at a global level M is acting as a springboard on to international stages.