Before the Latino Music Festival, Marcel will perform at Carthage College on September 24.

Subsequent to the show in Chicago, Marcel will also perform at the The Miami Dade College on September 27. For more details about this event, click here. 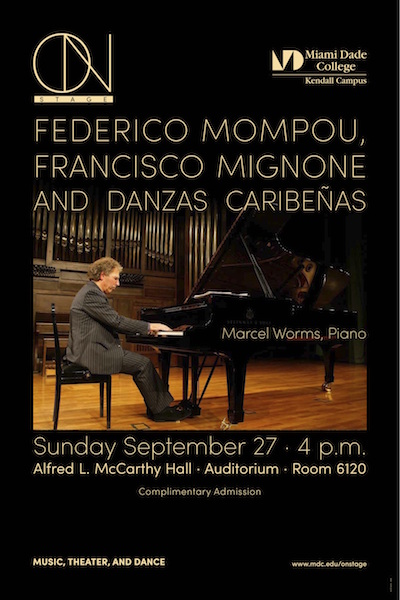 For the details about his shows, you can check out his schedule on the website of Marcel Worms.

Dutch pianist Marcel Worms (1951) studied at the Sweelinck Conservatorium in Amsterdam with Hans Dercksen. After his graduation in 1987, he continued his studies with Alexandre Hrisanide and Hans Broekman, specialising in 20th Century piano music and in chamber music. He took also private lessons with the Russian pianist Yuri Egorov.

Between 1998 and 2008 concerts have been given by Marcel Worms in many European countries, South-America, South-Africa, Israel, China, Cuba, the United States and the Far East. Since 2002 Marcel Worms focuses on the piano works of the Spanish composer Federico Mompou. In 2009, he released a cd with unpublished works for piano by Mompou,that had been discovered in Barcelona in 2008. A tango program, which was performed in China and Argentina, resulted in a CD with Tangos for Piano in 2002. With flutist Eleonore Pameijer he is working on their ‘Six Continents Project’ in the Netherlands and abroad. For this project composers from all the 6 Continents wrote a piece in which they expressed their cultural identity. The program has been performed in many European countries, in the USA, Israel and India and it has been released on CD on the occasion of UNESCO’s 60th Anniversary.