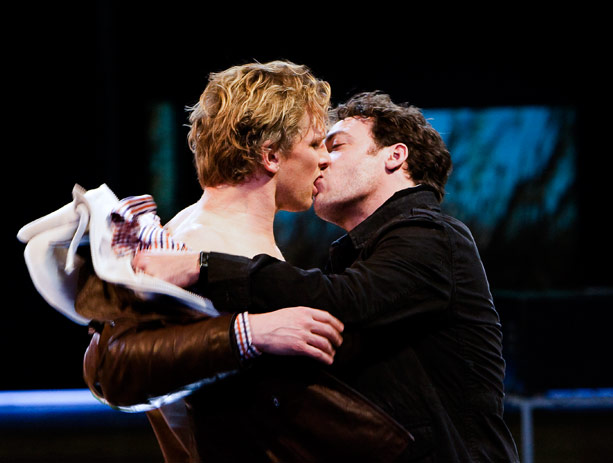 On October, 23, 24 and 25 Toneelgroep Amsterdam performs Angels in America at the BAM. On October 22 there will be a talk by Ivo van Hove and Tony Kushner

On October, 23, 24 and 25 Toneelgroep Amsterdam performs Angels in America at the BAM, the performances are part of BAM’s Next Wave Festival. On October 22 there will be a talk by director Ivo van Hove and author Tony Kushner.

About Angels in America

“Angels in America”, Tony Kushner’s Pulitzer Prize-winning epic 1991 examination of the AIDS crisis , has been part of the repertory of Dutch theatre group Toneelgroep Amsterdam since 2008 and will finally see its U.S. premiere at the BAM in Brooklyn from October 22 until October 25.

Directed by visionary Ivo van Hove, this revelatory take of Kushner’s masterwork, is presented without feathers and with a minimal décor instead and strips its now-iconic characters—Prior Walter and his boyfriend Louis, Reaganite lawyer Roy Cohn, Mormon couple Joe and Harper Pitt—to their essence.

The production is a five hour marathon edition with one intermission and the BAM organizes a ‘Talk’ on the 22nd of October prior to opening night, in which Ivo van Hove and Tony Kushner will discuss this season’s production.

At Toneelgroep Amsterdam, tradition and innovation go hand in hand. They are the pillars of a company that is constantly in motion and presents itself explicitly at the heart of Amsterdam.

TA is the largest theatre company in the Netherlands and is led by director Ivo van Hove. Since he was appointed in 2001, he has paved the way for an urban company with international allure by creating a series of sensational shows and by attracting different directors from the Netherlands, as well as from other countries. The core of the company consists of 22 quality actors, making it possible to keep shows in their repertoire.

Ivo van Hove has held central positions in Dutch-Belgian cultural life. He has received critical acclaim for his fresh interpretations of familiar dramatic works including, most recently, Roman Tragedies at BAM, as well as productions of The Little Foxes, A Street Car Named Desire and Hedda Gabler at NYTW.

Kushner in Dutch newspaper NRC writing about Toneelgroep Amsterdam: ‘It was aweinspiring, it completely blew me away. … America is full of actors desperate to feel something on stage. The playwright’s words merely provide them with the sounds to match these emotions. I need actors who devote excessive attention to the detail of the script. And I get that here … I love Hans Kestings’ recklessness, his ruthless passion, and his quick tempo. His physical acting is better than any Cohn I’ve ever seen.’