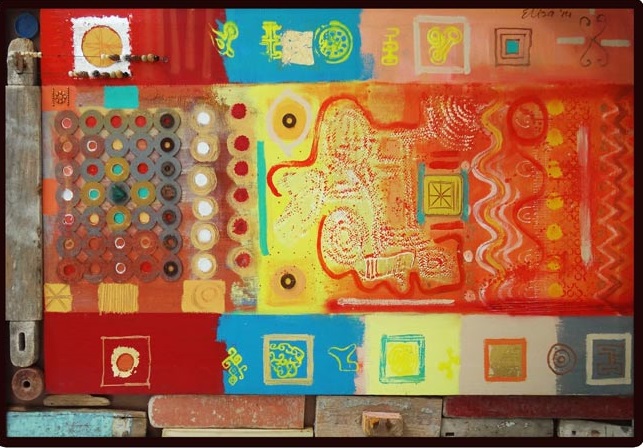 S Artspace Gallery NYC presents “conversations”, an exhibition that interprets the cyclic patterns of life. Elisa Lejuez and three other female artists present and exchange their energy, emotions and experiences in the context of art on existence from March 18 to April 1.

One can read Elisa Lejuez’s paintings as an “archeology” of layered artistic designs. In her neo-native collection, Elisa finds  inspiration in the caves of Aruba and relates the symbols of everyday life to ancestral discoveries. “These  original maps and drawings from the geometric period may show you the way of life”  states Elisa. “Amazonite stones  have a soothing, calming effect. They stimulate creativity, optimism and inspiration. All these elements make the neo- native experience and help to find the perfect balance in life.” Elisa’s style is characterized by a striking use of colors, acrylic paint and the technique of silk screen.  This new collection is composed of stones, driftwood, seeds and geometric forms.

Elisa Lejuez-Peters, born April 15th 1973 from a Curacao mother and Dutch father was raised in Nijmegen, the Netherlands. From an early age on she expressed her sensitive observations in numerous sketches and drawings. With this sensitiveness she developed a great instinct for colors and shapes.

In the following years her studies paid off being a textile designer for several Dutch textile companies. This gave Elisa the opportunity to travel to Asia occasionally. Working as a textile designer Elisa gained a precious amount of impressions that became the foundation of her artist life.

In 2000 she left the Netherlands and started to live in Aruba. Living on Aruba gave her the inspiration and opportunity to develop herself as an artist. For Elisa it felt like all her life she had been working towards this point. After less than a year she started contributing to expositions, and from 2001 onwards her production and expositions have exceeded her expectations.