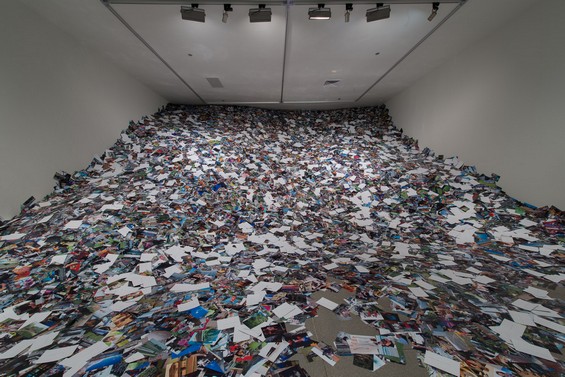 Pier 24 Photography in San Fransisco presents group exhibition Secondhand, including work by Erik Kessels. Secondhand is on view through May 2014.

Pier 24 Photography presents Secondhand, an exhibition (on view from August 2014 through May 2015, make an appointment to visit here) featuring artists (including Dutch artist Erik Kessels) who build repositories of found images, from which they appropriate, construct, edit, and sequence in order to create something entirely new. Through this process, their distinctly personal approaches become as wide-ranging as their source material. These works are paired alongside selected vernacular photographs from the Pilara Foundation collection, illustrating another instance in which found pictures can offer new meaning through a simple change of context.

The digital age has ushered in a culture of curating. Blogs, along with websites like Instagram, Facebook, Pinterest, and Flickr, enable users to not only produce and disseminate unique content, but also to communicate through the editing, sequencing, and selection of existing material. These online platforms have become a way of digesting and understanding the overabundance of visual information circulating daily. As a result, the definition of the term curator has expanded beyond the realm of highly educated art historians to include anyone engaged with organizing content. It is no surprise that this curatorial impulse appears in the practices of many contemporary artists, where the distinction between curator and creator has become less defined.

The pioneering artists John Baldessari (Rm 03), Richard Prince (Rm 01), Larry Sultan and Mike Mandel (Rm 15) began sourcing images from popular culture and government archives in the 1970s and 1980s. Removed from their original contexts, these pictures offer new insight, encouraging viewers to reexamine their relationship to commonplace imagery, while also considering the notion of authorship. The precedent set by these artists empowered the next generation to sample, dissect, and reimagine without hesitation, using any available image to create new works of art.

Erik Kessels, whose work is featured here in several large galleries, epitomizes the fluidity of the roles of curator and creator. Kessels has amassed an immense archive of vernacular snapshots and photo albums that he incorporates into his artistic practice. In Album Beauty (Rm 09) and in almost every picture (Rm 04) he curates from his holdings to suggest universal connections between found images, which, as a result, transcend their personal subject matter. Viewed through his lens, Kessels’s selections speak to the human experience and nod to the power, beauty, and materiality of these amateur pictures at a time when images are largely consumed online. In 24 Hrs in Photos (Rm 17) he comments directly on the photograph’s role in the digital world by printing every picture that had been uploaded over the course of one day to the photo-sharing website Flickr. Through this installation, the viewer can both visually and physically experience the overwhelming number of photographs shared online.

At a moment when the medium is undergoing significant changes, the desire to reexamine what photography has already accomplished is strong. So what are the image-makers brought together in this exhibition doing to advance the language of photography? With more than one hundred and fifty years of printed photographs at their disposal, along with the millions of digital pictures uploaded daily, these artists are uniquely positioned to critically examine the role of images in our society. While mining these found images to reveal their own perspectives, the defining features of their artistic voices become process, craft, and display. A refined engagement with the history of art also contributes to the exhibited artists’ ability to convey an articulate message from the overabundance of visual material that surrounds us. The works presented in Secondhand resonate with the current state of our visual culture and our society’s obsession with access, illustrating the creative potential intrinsic to the sharing and curating of images and ideas.