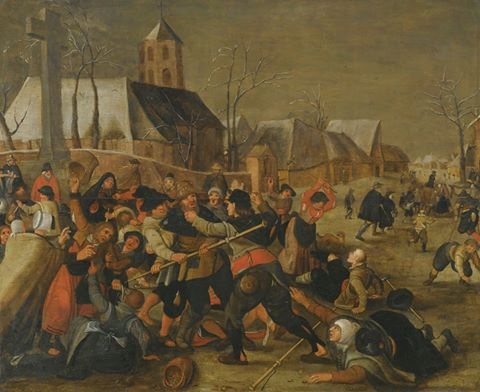 From January 21 until December 13 2015 The Bob Jones University Museum & Gallery presents The Golden Age of Painting in the Low Countries. A dynamic representation of northern European artwork from the 1600s with works on loan from New York private collector Lev Grzhonko.

M&G curator John Nolan states “I’m not aware of any loan exhibit that has come to our city having such a diverse selection of artists and genres from the Low Countries during the late sixteenth and the seventeenth centuries.” In addition, while M&G’s collection of Dutch art is focused largely on religious subjects, Nolan observes “theGolden Age exhibition allows M&G to feature a broader spectrum of what else was happening in this era of creative genius.” After the modern‐day regions of Belgium and The Netherlands gained independence from Spain in 1648, the newly‐formed Dutch Republic experienced strong economic growth and development, allowing a fresh crop of talented painters to flourish in the Low Countries’ rapidly‐expanding patronage system. Freed from the cultural dominance of their southern neighbor, Dutch Republic artists explored new genres and subject matter, including still‐life, landscapes, portraiture, and views of everyday life and occurrences. Many of these new genres will be represented by M&G’s Golden Age exhibition, providing an excellent complement to the strong representation of Dutch and Flemish paintings found in the collection at M&G, which includes the great artists like Rembrandt, Rubens, van Dyck, Honthorst, and Terbrugghen.

M&G presents  this truly unique exhibition to the residents of Greenville and the Upstate. Everyone is welcome to visit and glimpse the seventeenth‐century Dutch way of life as captured in paint. Admission for The Golden Age exhibition is $5 for adults, $4 for seniors, and $3 for students. Children 12 and under attend free. Hours for M&G at Bob Jones University are Tuesday through Sunday from 2PM‐5PM. The exhibition can be visited until the end of 2015.