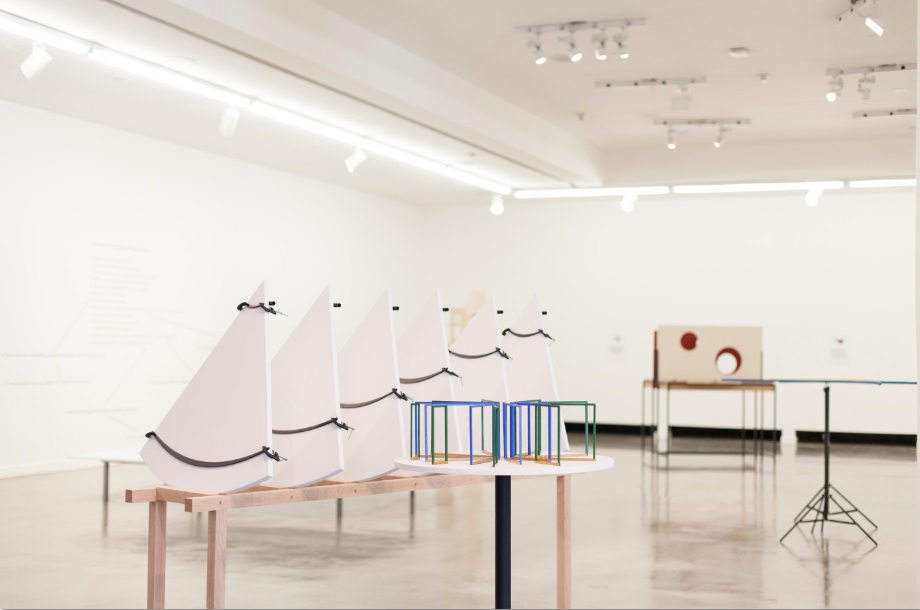 The Gallery at REDCAT presents The value in mathematics, the first solo exhibition by Falke Pisano in the United States, until June 28, 2015.

Pisano’s new commission considers the notion of ‘ethnomathematics’ with works that examine the cultural construct of mathematical practice. The exhibition includes a series of sculptures, diagrams and text pieces that approach issues such as exchange, measurement, design, navigation and calculation, and how methods and applications of these notions vary in different contexts. Pisano’s research-based practice looks at how, where, and through what processes an art object is realized and generates meaning. Her diagrammatic works expose a loop, in which shifting abstract sculptural forms are conceived directly in relation to written and spoken language, implying an ongoing and morphing production of meaning.

Through the notion of multiple mathematics, the exhibition asks questions surrounding the relationship between universal and particular; curricular versus cultural responsibility in education; and globalism and pluralism through the lens of logic, scientific research and abstraction–all of which are also pertinent issues in contemporary art. Mainly composed of wood, metal and fabric, the sculptural pieces in The value of mathematics reference objects such as a weaving frame, a transaction counter, a map, and several display tables. Varying in scale, the pieces refer to issues such as “negotiations in exchange,” “learning in proximity,” “reading the world with mathematics,” among others.

Commonly regarded as the universal and foundational language of science, mathematics is generally considered a value-free discipline. It is taught as a global language in classrooms, used in transnational financial markets, and streamlines the technological military complex. This concept of mathematics has an historical beginning in the sixteenth century Renaissance, and Galileo’s efforts to make it the “language of the natural world,” applying it to problems that prior to that were explained through Aristotelian natural philosophy. Yet the notion of mathematics as a disinterested and neutral science has been challenged by critical educators, philosophers, science historians and to some extent within the discipline itself. These efforts show that there are several conceptions of mathematics that vary from the dominant, global one. While some emphasize the differences in cultural constructions of mathematics (and therefore advocate for the introduction of a variety of approaches in learning situations), others look at the dominant mathematics as a science that in and of itself is a result of cross-cultural pollination, and is inherently dialogical.

The exhibition The value in mathematics speculates on the possibilities of a world with several mathematics, the kind of translations and transactions that ensue, and the multiple futures that different mathematical universes propose.

This exhibition is curated by Sohrab Mohebbi, assistant curator, Gallery at REDCAT