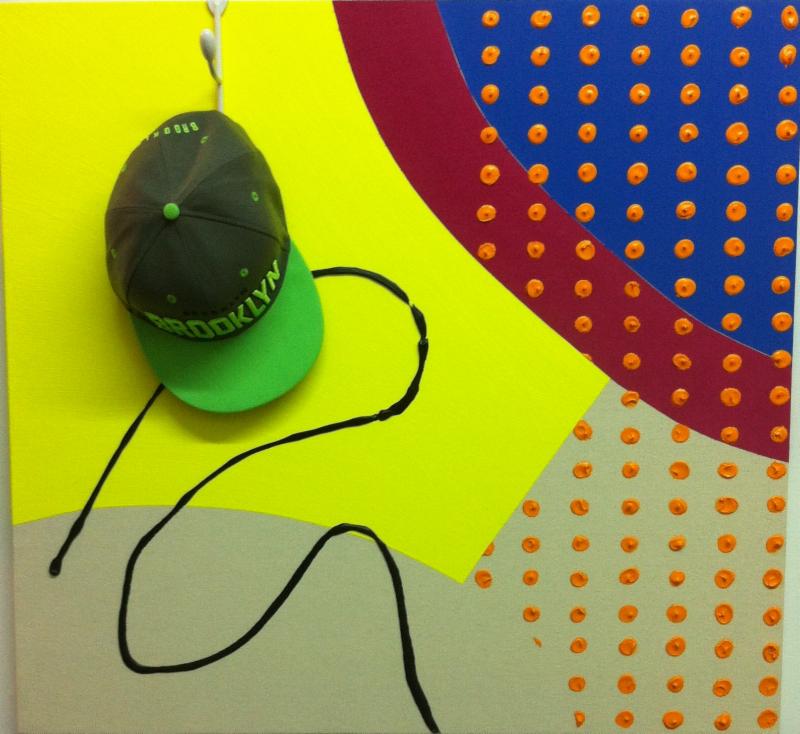 Stephan Stoyanov Gallery is delighted to present a four-person exhibition “There is more Downstairs.” This exhibition brings together four artists: Shannon Plumb, Bridgitte NaHoN, Houben R.T. and Felix Aarts, in the gallery’s downstairs exhibition space, and will be on view from January 19 until February 23, 2014. Opening reception: Sunday, January 19, 2014, 6-8pm.

The viewer is invited into a less conventional space opening up at the bottom of the stairs. The atmosphere of the gallery’s basement is a darker one, more dungeon-like, compared to the traditional white cube upstairs. In the basement there is space for experimentation and reflection, far away from the buzz of the street.  All four artists are sharing a multidisciplinary artistic practice, creating work using a variety of ways to express themselves. The exhibition brings together painting, sculpture and film in a way that might hint tradition but strives for new ways of thinking. There is more Downstairs is an investigation in how imagery and tradition react in modernity.

Born in ‘s-Hertogenbosch, the Netherlands, Felix Aarts attended the ArtEZ Institute of the Arts in Arnhem and graduated in 1997 from The Hague Royal Conservatory with a BFA in Ballet. Aarts has had an extensive career, dancing soloist rolls in ballets of renowned choreographers and he also had numerous rolls created on him.

In 2009, Aarts moved to Oslo, Norway to study painting at the Strykejernet Art School. During his time in Oslo he created two new choreographies for the Norwegian National Ballet. In the spring of 2013 Aarts graduated from Pratt Institute in New York with an MFA in painting. Aarts has exhibited his work both in Europe and the USA. Aarts published his first photo book in 2011, portraying Italian principal dancer Giovanni Di Palma and in the spring of 2013 he designed the set for “We Were Right Here” by Choreographer Martin Chaix for the Deutsch Oper und Ballett am Rhein. Felix Aarts works and lives in New York City.

Born in Schenectady, New York and moved to the city in her early 20’s. Unsure of her direction, she took a job as a gourmet delivery girl and found herself delivering food to the steps of Mario Sorrenti’s home. In 1995, Plumb began her modeling career for Sorrenti. It was collaboration that has influenced her work as a filmmaker and visual artist from both aesthetic and theoretical standpoints. Plumb’s work borrows from the histories of performance, photography, film and video, while at the same time making keen observations of modern life.

Born in Nice and based in Tel Aviv, award-winning artist Brigitte NaHoN creates sculptures and drawings that explore the elusive possibility of balance between tradition and modernity. Using an unlimited variety of materials, NaHoN investigates the concept of perfect balance in an unbalanced world,weaving conflicting characteristics – heaviness and lightness, strength and fragility, transparency and darkness- together to create a harmonious whole.

NaHoN holds a Master of Fine Arts from the University of Provence, Aix-en-Provence and a PhD in Visual art from the University of Paris, Panthéon-Sorbonne. NaHoN’s work has been exhibited internationally at The Jewish Museum, New York, and the Centro Cultural Banco, Rio de Janeiro, Brazil, where the first retrospective of NaHoN’s work was presented in 2001. Recent solo exhibitions include Stephan Stoyanov Gallery, New York; Gallery Iragui, Moscow, Galerie Jérôme de Noirmont, Paris, “Side by Side” Akim Monet Gallery, Berlin, and Largo Das Artes Gallery, Rio de Janeiro. NaHoN works and lives both in New York and Tel Aviv.

Born January 23, 1970 Houben Tcherkelov, (Bulgarian: Хубен Черкелов; known as Houben R.T.) is a Bulgarian painter and experimental artist who lives and works in New York.
In his early photographs, film and installations, post-communist Bulgaria and Bulgarian art is a recurrent theme. In his more recent work, Tcherkelov paints images from American and other national currencies using impasto, glaze and watercolor techniques.
In all of his work the artist seeks to suggest the way in which symbolic images legitimize national power. His works have been featured at The Bronx Museum, NY, The Brogan Museum, FL, the 54th  Venice Biennial and galleries in New York, Boston, and Charlotte. He is the subject of the 2012 documentary, “Houben Paints Money,” by director Georgi Tenev.