Fiona Tan: Inventory at the Philadelphia Museum of Art 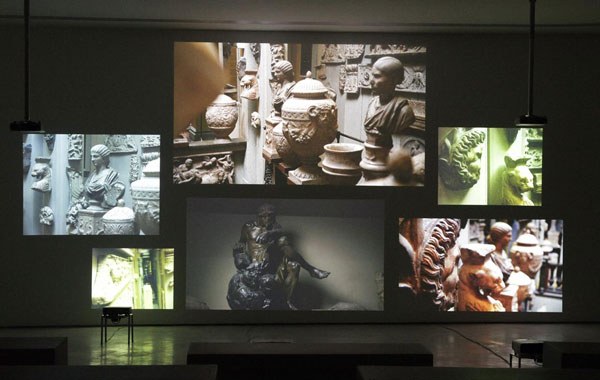 The Philadelphia Museum of Art presents Fiona Tan: Inventory, a multiprojection installation inviting viewers to consider museum collections as well as the human compulsion to capture the transience of time and lived experience

From December 14, 2013 until March 23, 2014 The Philadelphia Museum of Art presents Fiona Tan: Inventory, a multiprojection installation inviting viewers to consider museum collections as well as the human compulsion to capture the transience of time and lived experience. On Wednesday, December 11, 2013, 6:30-7:30pm, the museum will also present In Dialogue: Fiona Tan and Carlos Basualdo in Gallery 299, Julien Levy Gallery, Perelman Building.

Filmed at the Sir John Soane Museum in London over a period of four days in September 2012, Inventory presents intimate details of the British architect’s (1753–1837) personal antiquities collection housed in one of the most unique private residences to become a public museum. This high-definition video installation is structured as a large-scale montage of six projections simultaneously displayed on one wall in an uneven grid. Each individual projection shows details of the crammed interiors of the museum containing a multiplicity of ancient architectural fragments and sculptures.

Inventory explores Tan’s preoccupation with time, memory, and place, and is as much a meditation on the human impulse to collect as a reflection on Tan’s artistic practice to date. In recording the idiosyncratic collection of Sir John Soane using a variety of mediums (Super 8, 16, and 35 millimeter film, and analog, digital, and high-definition video), the artist challenges the viewer to reconsider ideas such as representation, perception, and history while contemplating the resilience of a medium associated with a contemporary artistic production.

Fiona Tan (born Pekanbaru, Indonesia, 1966) completed her education at the Gerrit Rietveld Academie and the Rijksakademie van Beeldende Kunst, both in Amsterdam. Her work has been shown internationally and was included in dOCUMENTA 11, the 53rd Venice Biennale, and in exhibitions organized by the Rijksmuseum, Amsterdam; Centre Pompidou, Paris; and Fondazione MAXXI, Rome. Tan currently lives and works in Amsterdam.

Live Cinema is a series of programs that explores the vast production of video and filmwork by a diverse group of local, national, and international artists. In the last decades an ever-increasing number of contemporary artists have appropriated these mediums as an artistic outlet, in a dialogue with the early video and Super 8 practices of the sixties and the tradition of experimental filmmaking. Each program of the Live Cinema series focuses on a specific aspect of this work, in order to both map and analyze this important facet of contemporary art production. Certain Live Cinema programs are accompanied by a brochure in which writers and curators discuss the works exhibited, and also by public lectures given by the participating artists.

This exhibition is generously supported by Kimberley Gray. Additional support is provided by the Mondriaan Fund, Amsterdam, and by public funds from the Consulate General of the Netherlands in New York. Realization of Inventory was made possible through the Philadelphia Museum of Art with generous support from the Wyncote Foundation. Additional support for the production provided by the Leo Katz Collection, Bogotá, Colombia.