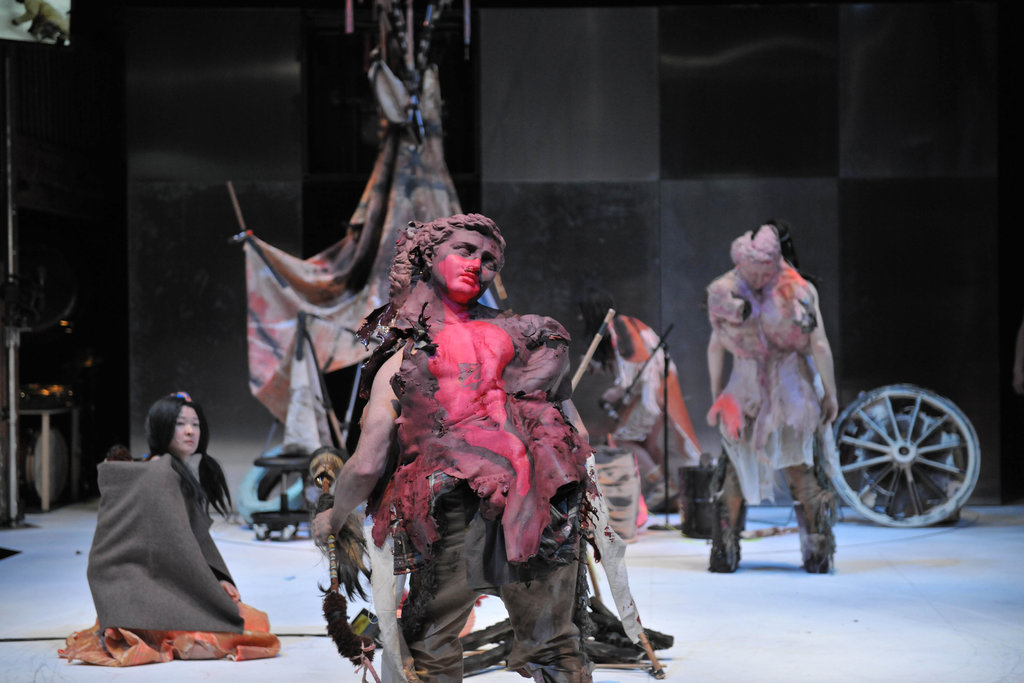 Dutch artist Folkert de Jong collaborates on the sets and costuming for CRY, TROJANS!, a performance by The Wooster Group.

Dutch artist Folkert de Jong collaborates on the sets and costuming for CRY, TROJANS!, a performance by The Wooster Group. At The Performing Garage, now extended through February 15, 2014.

The Wooster Group, producer of theater, dance, film and video, is currently developing a production of one of William Shakespeare’s most enigmatic plays, Troilus and Cressida, translating it into a distinctly American idiom. The Group will present four weeks of preview performances of this new production, CRY, TROJANS!

CRY, TROJANS! originated as a coproduction with the Royal Shakespeare Company (RSC) of Troilus and Cressida at the World Shakespeare Festival in conjunction with the London 2012 Olympics. In that collaboration, the two companies took opposite sides in the Trojan War: the Wooster Group staged the Trojan scenes while the RSC staged the Greek ones. Scenes with both Greeks and Trojans were staged by both, each side developing its own version. The companies worked separately until they met a few weeks before performing the piece to sew its two halves together.

Seeking a decidedly American angle from which to encounter, the RSC and the language of Shakespeare, the Wooster Group turned to the powerfully suggestive and contradictory figure of the American “Indian”. The Wooster Group reimagined the Trojans as a pastiche fictional tribe of early Americans struggling to assert its dignity as doom closes in. This time the collaboration is converted into an independent piece. CRY, TROJANS! concentrates on the Trojan side of the story, the corruption of sincere love and the downfall of a noble hero.

Folkert de Jong is an Amsterdam-based artist whose large-scale sculpture and installations are life-size representations of disturbing scenes. He have had several solo- and group exhibitons, and collaborated on various performenses. For CRY, TROJANS! he collaborated on the sets and costumes.

Order your tickets for the preview perfofmances here.