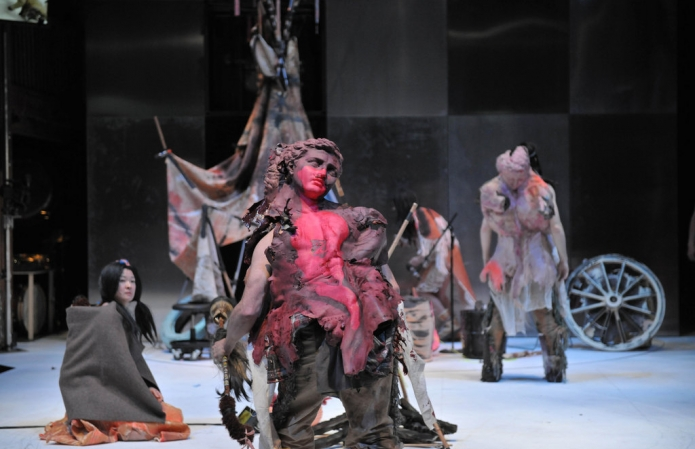 Folkert de Jong is internationally recognized for figurative sculptures executed in the inorganic industrial materials.  He also designed the set elements, props and costumes for the theatre play CRY, TROJANS! The play originated as a co-production of Troilus and Cressida, Shakespeare’s Trojan War play, with the Royal Shakespeare Company. The Wooster Group has further adapted the collaboration independently, concentrating on the Trojan side of the story and the spoils of war: the corruption of sincere love and the downfall of a noble hero. It can be seen from March 24 until April 19 in St. Ann’s Warehouse in Brooklyn.

CRY, TROJANS! (Troilus & Cressida) began as a co-production with the Royal Shakespeare Company. That original production, TROILUS AND CRESSIDA, was commissioned by the RSC for the World Shakespeare Festival, produced for the London 2012 Olympics Festival. Co-directors for the original production: Elizabeth LeCompte and Mark Ravenhill.