Opening May 28th, Folkert de Jong presents four of his bronze sculptures at Omi International Arts Center in Ghent, NY. For one year, de Jong’s figurative shapes will be a part of Fields Sculpture Park – perfect for a relaxing, yet thoughtful, summer stroll. The works were most recently shown in his solo exhibition “Holy Land” at James Cohan Gallery New York in 2015.

Folkert de Jong is internationally recognized for figurative sculptures—executed in the inorganic industrial materials of Styrofoam and polyurethane—that mine issues of empire, trauma and myth. In 2012, De Jong made his first works in cast bronze, bringing experimentation and edge to the medium, as well as engaging in the history of the monument and public art. 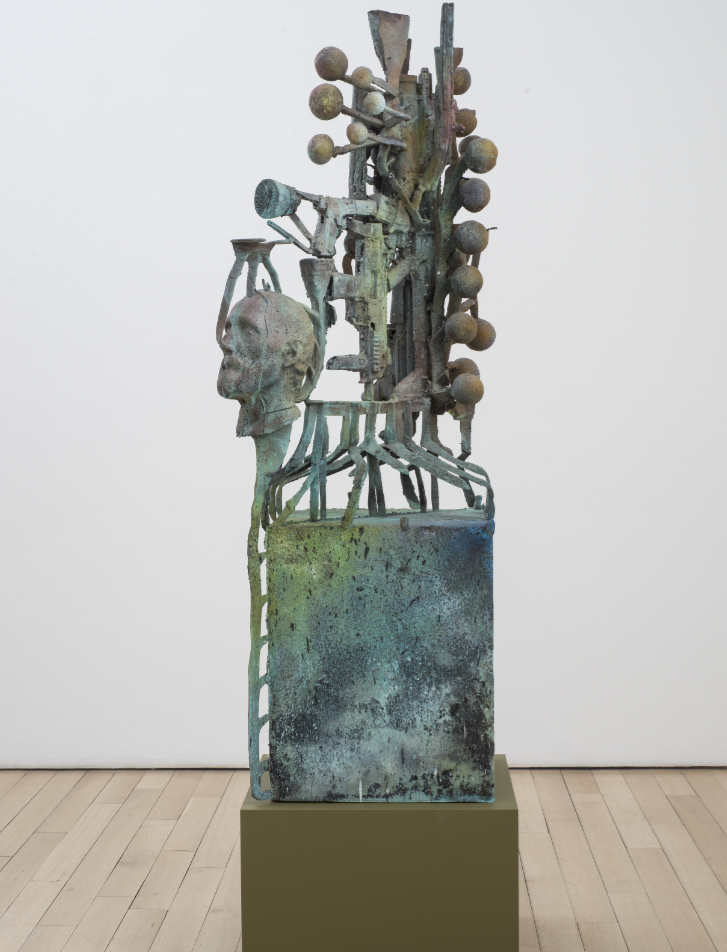 The works presented at Omi International Arts Center were first developed for De Jong’s solo exhibition at the Hepworth Wakefield in Yorkshire, UK, where in collaboration with the nearby Royal Armories in Leeds, the artist made 3D scans of suits of armor belonging to Henry VIII. The idea of preservation, in the sense of both immortalization and protection is addressed. How do we decide what to remember from history, and what do we leave out? How do facts erode, and how can we restore them?

“The scene De Jong creates does not feel like an official history,” writes the Hepworth curator Sam Lackey, “but rather a hidden or unseen moment—an uncovered conspiracy from the past.” The sculptural arrangement is frozen but alive, a series of monuments built from unexpected connections, with meaning gathering at the seams.

Harsh and rough with heightened expressive power in material and theme, de Jong’s figures embody a grotesque horror and macabre humor reminiscent of the work of the 20th century European artists Georges Grosz and James Ensor. As critic Gregory Volk has remarked, de Jong’s sculptures “communicate a range of emotions, or really complex states of being; stalwart purpose, mania, fanaticism, humor, malevolence, sadness, delusion, introspection, and even tenderness occur simultaneously. You surmise, and the title certainly tips you off, that there is something sinister and dangerous about this goofy parade, but then again you can’t dismiss these figures as mere symbols; they are too psychologically complex, too close to the bone.”

Folkert de Jong was born in 1972 in Egmond aan Zee, and now lives and works in Amsterdam. He is best known for his theatrical, narrative tableaux that address themes of war, greed and power. “When I watch the news or follow the world by the media,” de Jong stated in conversation with critic Steven Cox in 2013, “I can’t believe what I am hearing and seeing, it seems like a déjà vu, something is repeating itself.” A sense of tragedy and absurdity, a comically desperate psychological state, permeates his work, particularly through the sculptural material for which de Jong became known: industrial Styrofoam and Polyurethane insulation foams.

De Jong began working in bronze in 2012, and made his formal full debut in the medium for the solo exhibition Amabilis Insania: The Pleasing Delusion at the Middelheim Museum, Antwerp, in 2013-14. The addition of bronze to de Jong’s sculptural language represents an engagement with mortality, monumentality and world history that is more nuanced and less visceral than the use of modern synthetic compounds that defined the first 15 years of the artist’s practice.

Omi International Arts Center is a not-for-profit arts organization with residency programs for international visual artists, writers, translators, musicians, and dancers. Omi seeks to foster an environment of creative exploration and exchange, professional opportunity and exposure, and a stylistically and culturally diverse community for creative artists from around the world. Through our programs and resulting public events – including our Residency Programs, The Fields Sculpture Park, Architecture Omi, and Education Omi – Omi contributes to a vibrant arts culture locally, regionally, and internationally.