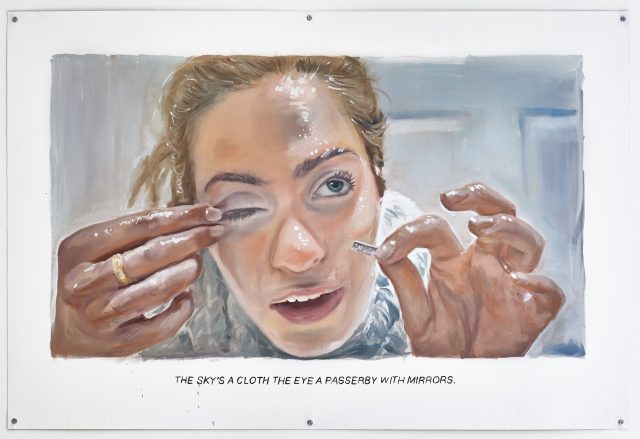 From March 7 to 10 the Armory Show features works by Galerie Ron Mandos artist duo Muntean/Rosenblum. The artist duo mix references from art history with contemporary popular culture. Playing with visual codes from the past and the present, they mostly depict groups of young people – ambiguous scenes seeming to present unresolved situations in the making.  Muntean/Rosenblum invited three artists to make a selection of works that resonate with the presentation: Anthony Goicolea, Hans Op de Beeck and Sebastiaan Bremer.
During the opening on March 6 acclaimed choreographer and artist Jonah Bokaer will perform a live choreography at the booth, responding to and interacting with the artworks.

Founded in 1999, Galerie Ron Mandos has developed an ever more ambitious exposition program in the last two decades. Its spacious location in the Amsterdam gallery district functions as a platform for cutting-edge contemporary art exhibitions. New and dynamic ways of artistic expression are continuously sought. Alongside the solo-shows and site-specific installations by internationally established artist Ron Mandos has a special focus on up and coming emerging artists.

Ron Mandos is a leading figure in the Dutch art world, with close connections to a plethora of national and international museums and collections. The gallery showcases performances as well as the development of trends, and Ron Mandos is frequently asked to be part of committees and juries. Galerie Ron Mandos was nominated in 2016 by AICA (International Association of Art Critics). This award nominates institutions that have distinguished themselves with exceptional, remarkable and accessible programming or policy in the preceding three years.

The Armory Show is New York City’s premier art fair and a leading cultural destination for discovering and collecting the world’s most important 20th- and 21st-century art. Staged on Piers 92 & 94, the Armory Show features presentations by over 200 leading international galleries, innovative artist commissions, and dynamic public programs. Since its founding in 1994, The Armory Show has served as a nexus for the art world, inspiring dialogue, discovery and patronage in the visual arts.

The Armory Show was founded by four New York gallerists – Colin de Land, Pat Hearn, Matthew Marks and Paul Morris – who sought a platform to present and promote new voices in the visual arts. In its 24 years, the Armory Show has stayed firm to its mission while establishing itself as an unmissable art event set in the heart of New York City and welcoming over 65,000 visitors annually.