Gerard David (about 1460–1523) painted some of the most compelling and technically exquisite works in the Netherlands around 1500. This exhibition reunites three parts of a remarkable altarpiece for the first time in almost a century: two dramatic wings (Koninklijk Museum voor Schone Kunsten Antwerp), which have been studied and conserved at the Getty Museum, and David’s striking central panel, Christ Nailed to the Cross (London, National Gallery). The display confirms that together the paintings form one of the artist’s earliest triptychs and presents findings from the project. 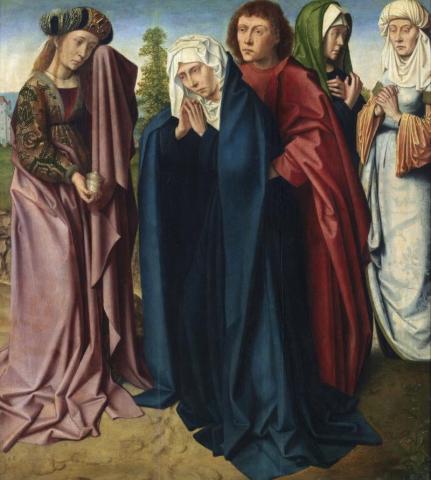 Gerard David was probably born in Oudewater. After his training in Haarlem, he establishes himself in 1484 as master in Bruges. David is the artist who summed up the 15th Century, the century of Jan van Eyck, both technically and content-wise, and at the same time already stood in the 16th Century. With the mysticism, a religious disposition for the secret and concealed, and the special attention to the landscape, he belonged with Geertgen tot Sint Jans. In addition to this, Gerard David is indisputably influenced both by the Italian Renaissance as by the ‘Flemish’ masters such as Memling and Van Eyck. Gerard David played an important role in the evolution of the landscape paintings that in the beginning of the 16th Century evolved to a self-standing genre under the influence of Joachim Patinir.

The J. Paul Getty Museum seeks to inspire curiosity about, and enjoyment and understanding of, the visual arts by collecting, conserving, exhibiting and interpreting works of art of outstanding quality and historical importance. To fulfill this mission, the Museum continues to build its collections through purchase and gifts, and develops programs of exhibitions, publications, scholarly research, public education, and the performing arts that engage our diverse local and international audiences. All of these activities are enhanced by the uniquely evocative architectural and garden settings provided by the Museum’s two renowned venues: the Getty Villa and the Getty Center.