On July 19, "The Hills," ten newly designed acres of park on Governors Island by Dutch urban design and landscape architecture firm West 8, will be officially opening for the season until September 25.

On July 19, “The Hills,” ten newly designed acres of park on Governors Island by Dutch urban design and landscape architecture firm West 8, will be officially opening for the season until September 25.

In May, the President of the Trust of Governors Island, Leslie Koch, described it to the New York Times as “the only place in New York City you can see her [The Statue of Liberty] face.” In the same month, the New Yorker went on a trip through the park with Adriaan Geuze, co-founder of West 8, who discovered Governors Island as “the coolest spot on the planet.” This summer, it is up to the public to explore the city’s newest “playground” – for children, as well as adults. 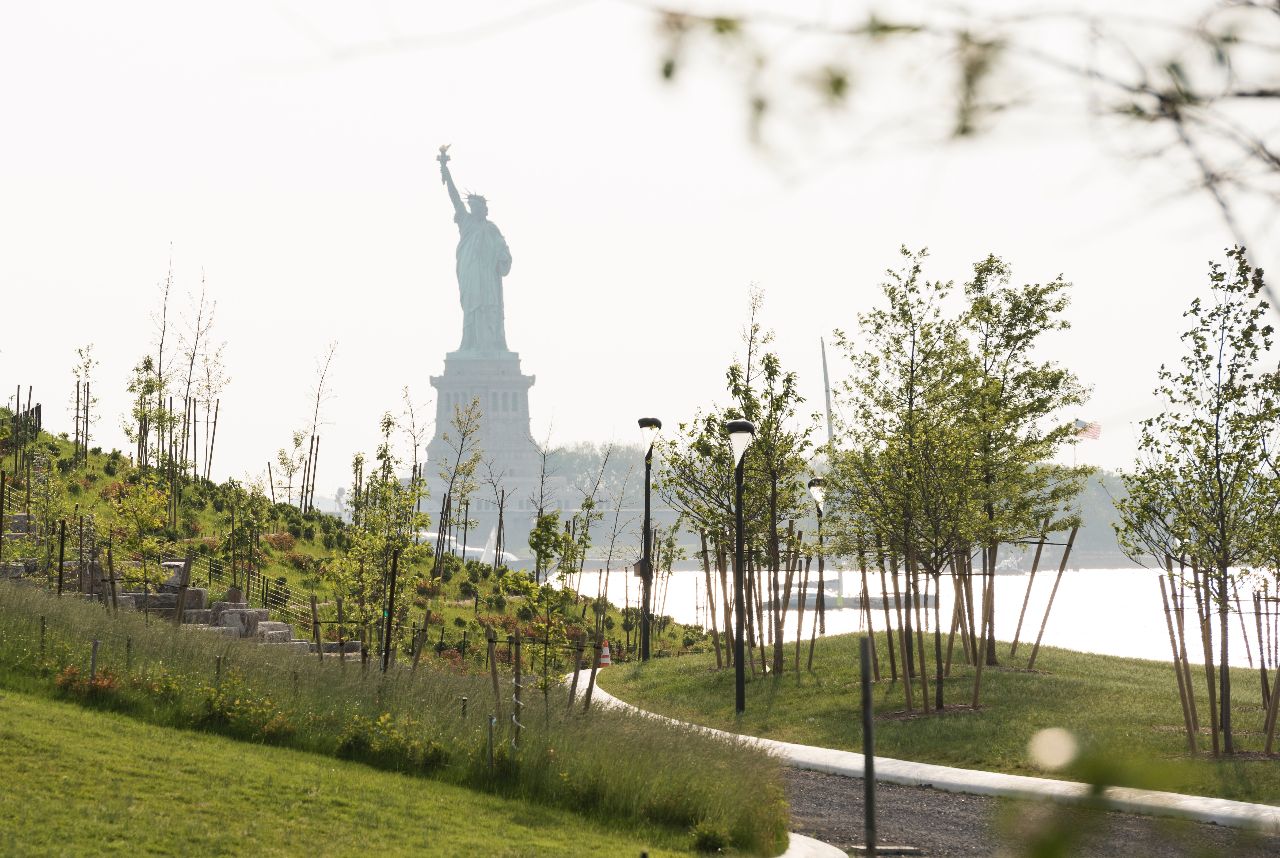 Designed by acclaimed landscape architects of West 8, the Hills are the culmination of the award-winning Governors Island Park and Public Space Master Plan. Rising 25 to 70 feet above the Island the Hills offer an extraordinary 360-degree panoramic experience of the NY Harbor. The opening of the Hills marks a major milestone in the transformation of Governors Island from an abandoned military base into an iconic destination for New Yorkers and visitors alike.

“Our Hills are the culmination of an eight-year collaboration with West 8 and the many New Yorkers and visitors who contributed ideas to this ambitious project,” said Koch. “The Hills are a triumph of imagination, state-of-the-art engineering and smart design that will ensure access to beautiful green space, the waterfront and incomparable views of the Harbor for years to come.” 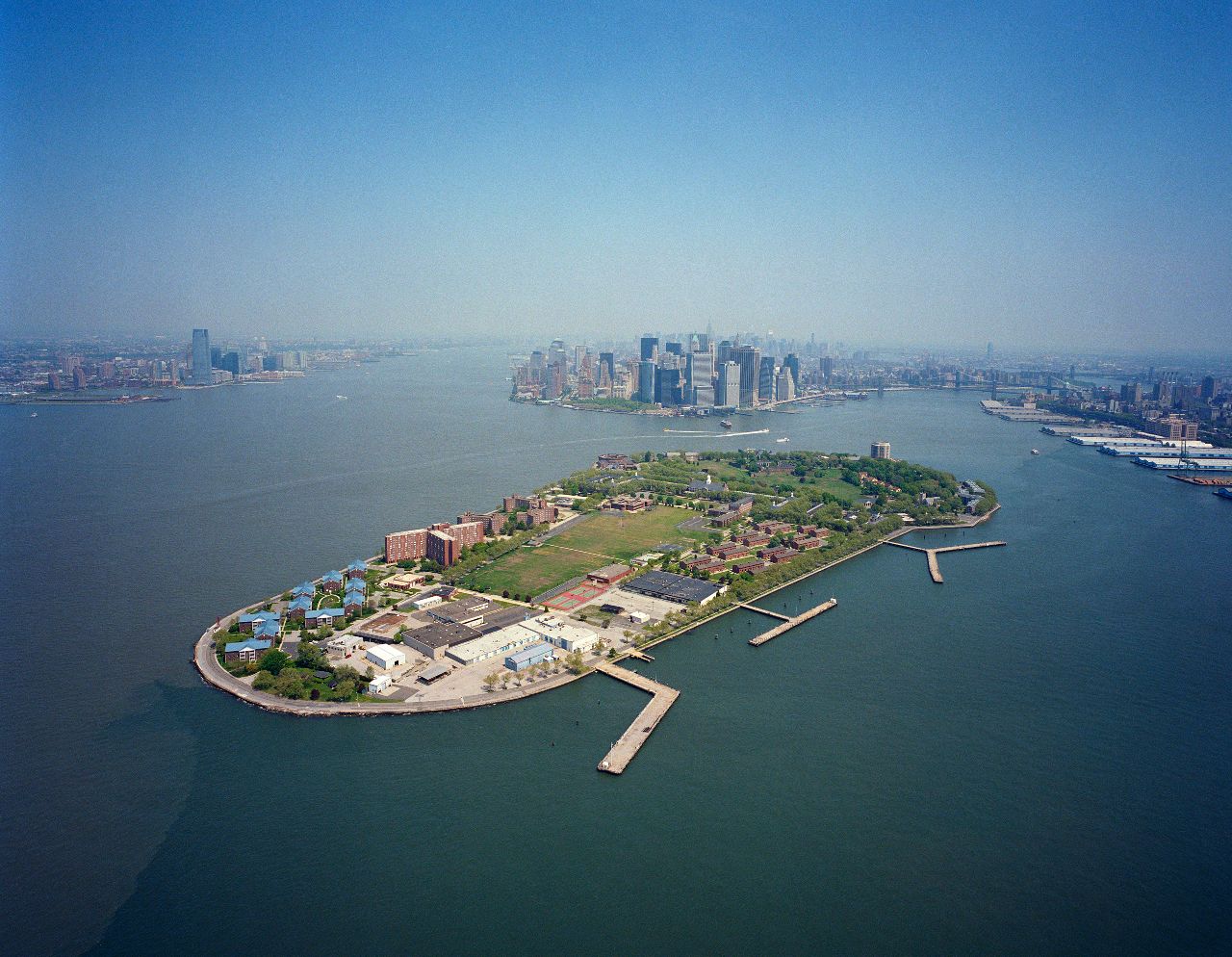 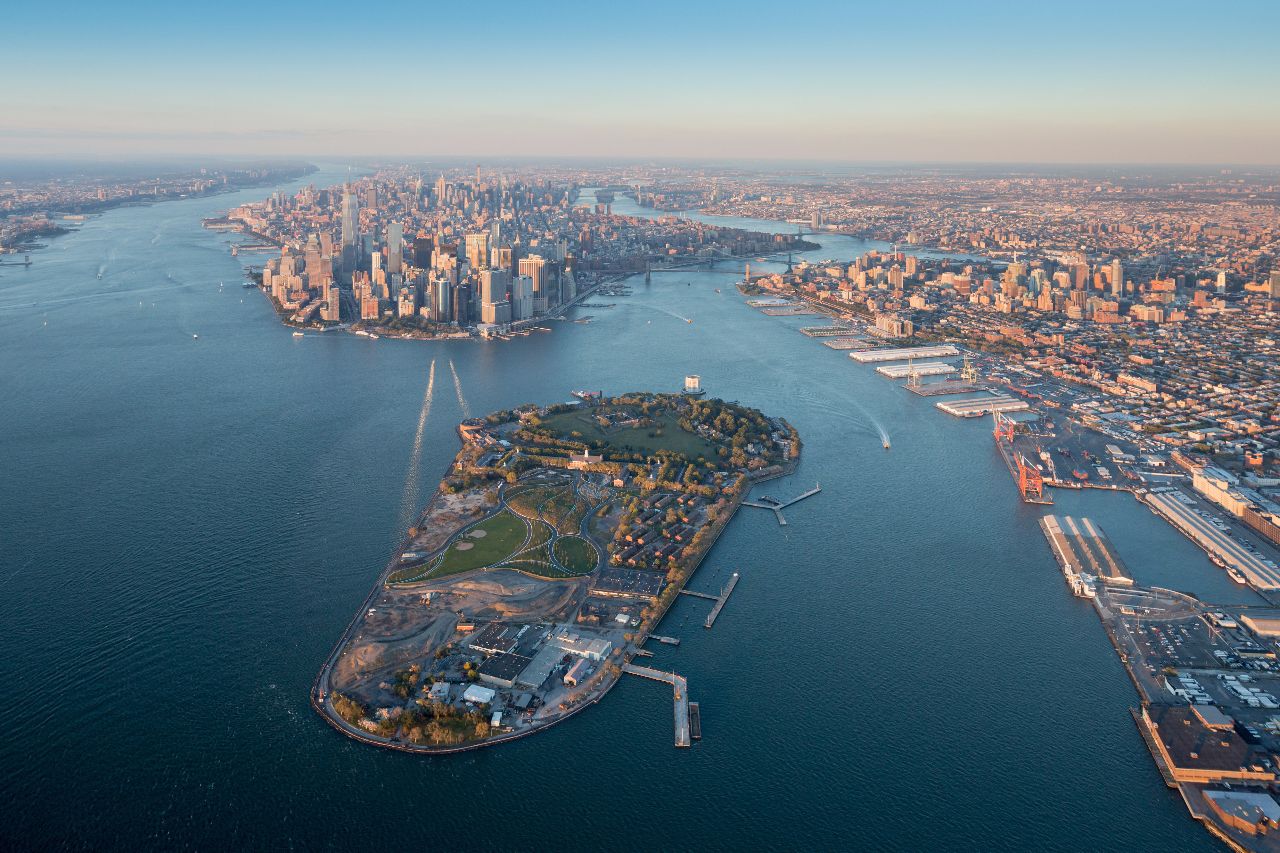 As previously announced, the Hills are opening nearly a year ahead of schedule. The four Hills embody all that makes Governors Island unique: art, play, nature, relaxation, and views. First, “Grassy Hill” is a 26-foot high gentle, grassy slope overlooking the Island’s new and historic landscapes and the Manhattan skyline, whereas “Slide Hill,” at 36 feet high, is the home of four slides, including the longest slide in New York City. 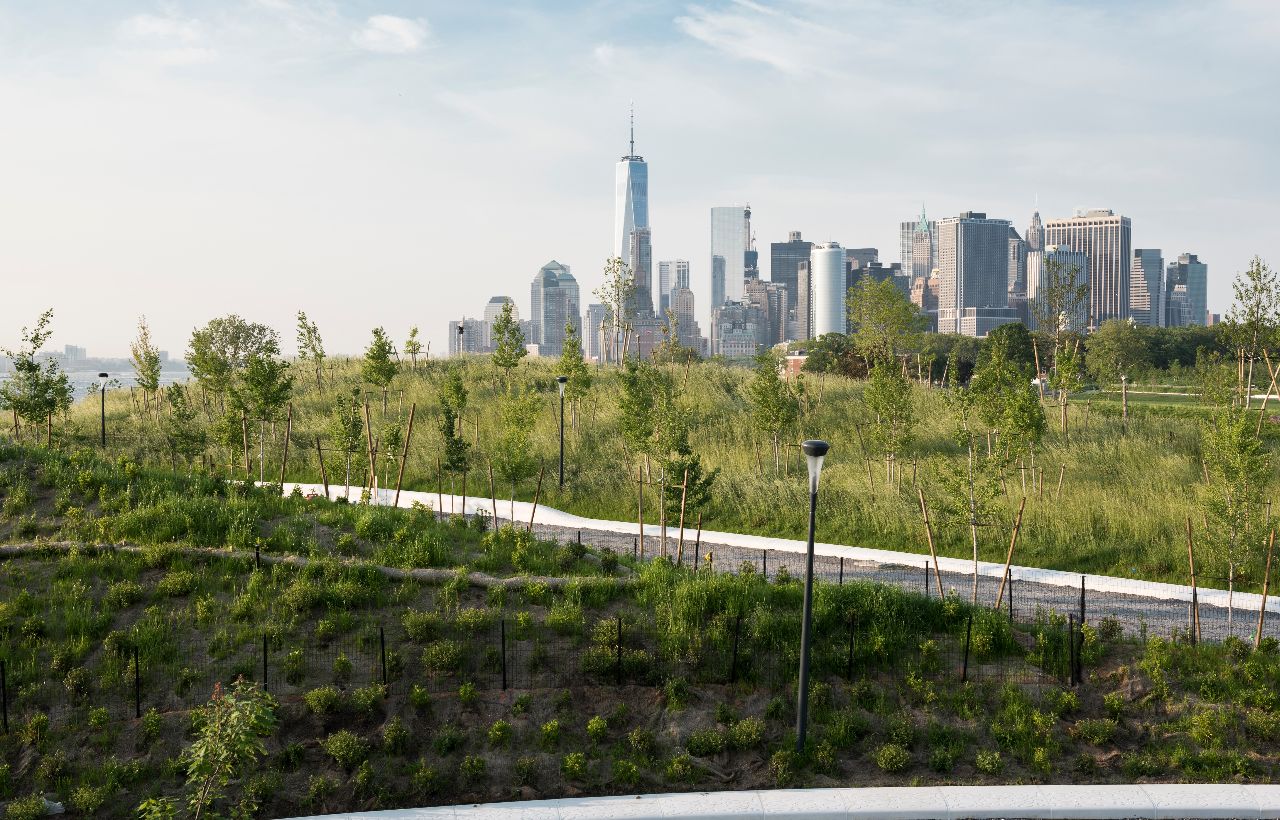 Meanwhile, “Discovery Hill,” also 39 feet high, features a site-specific sculpture “Cabin” by the internationally recognized British artist Rachel Whiteread and first major permanent public commission in the US. Last, “Outlook Hill” provides universally accessible paths and the Scramble, constructed out of reclaimed granite seawall blocks, to reach the Outlook. Here, 70 feet above the Island, visitors have unforgettable views of the New York Harbor, the Statue of Liberty and the skylines of Manhattan, Brooklyn and Jersey City. 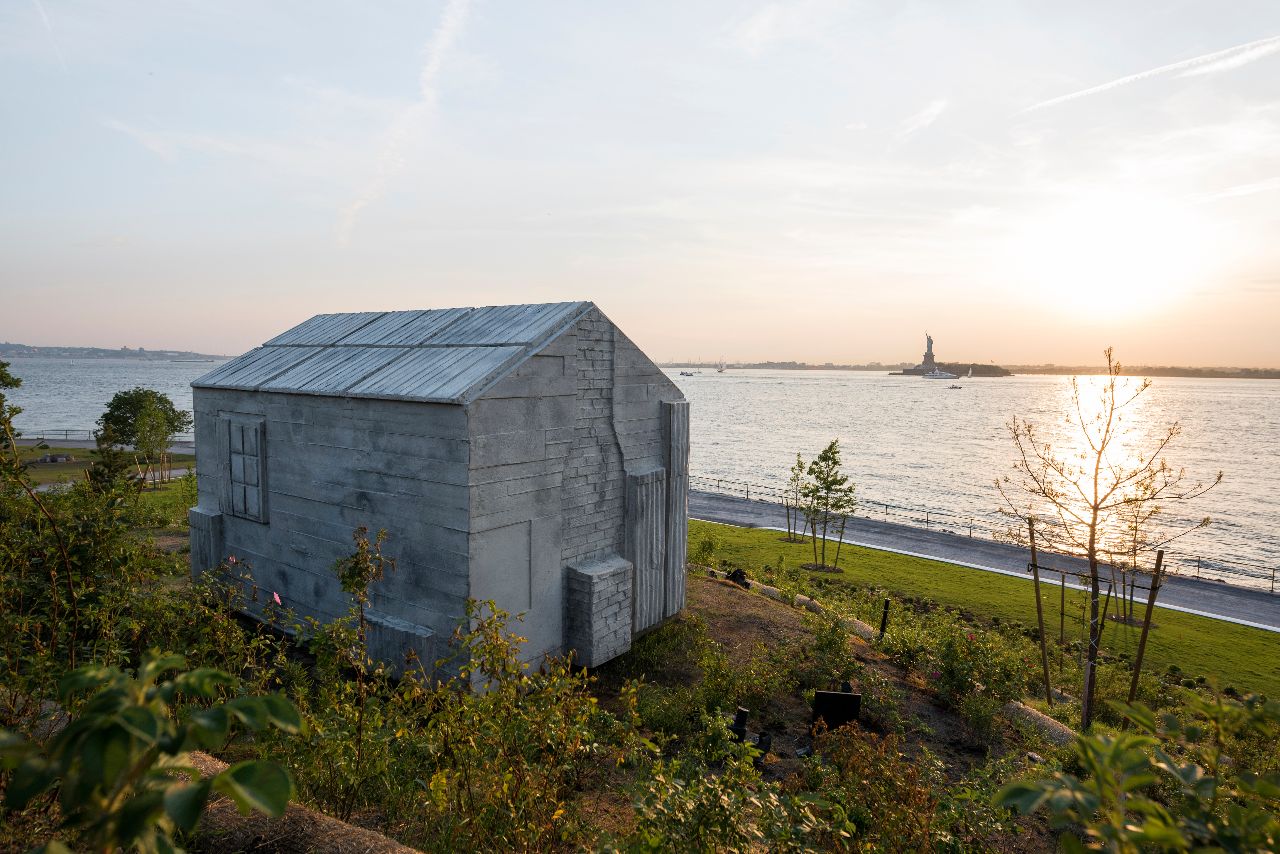 “Sculpted topography works in concert with winding pathways and trees to create ‘conceal and reveal’ vistas, choreographing the park experience,” said design director Geuze. “It maximizes the sense of anticipation, pulling a visitor through the park or signaling a place to sit and stay just a bit longer. The topography defines the very character of the area.” The Hills are constructed of recycled demolition debris, general fill and lightweight pumice, stabilized with geotechnical reinforcement and covered with shrubs, trees and grassy lawns. While the Hills provide striking vistas and comfortable settings for relaxation and play, they also improve the island’s resilience in the face of increasingly dramatic weather patterns and rising sea levels. 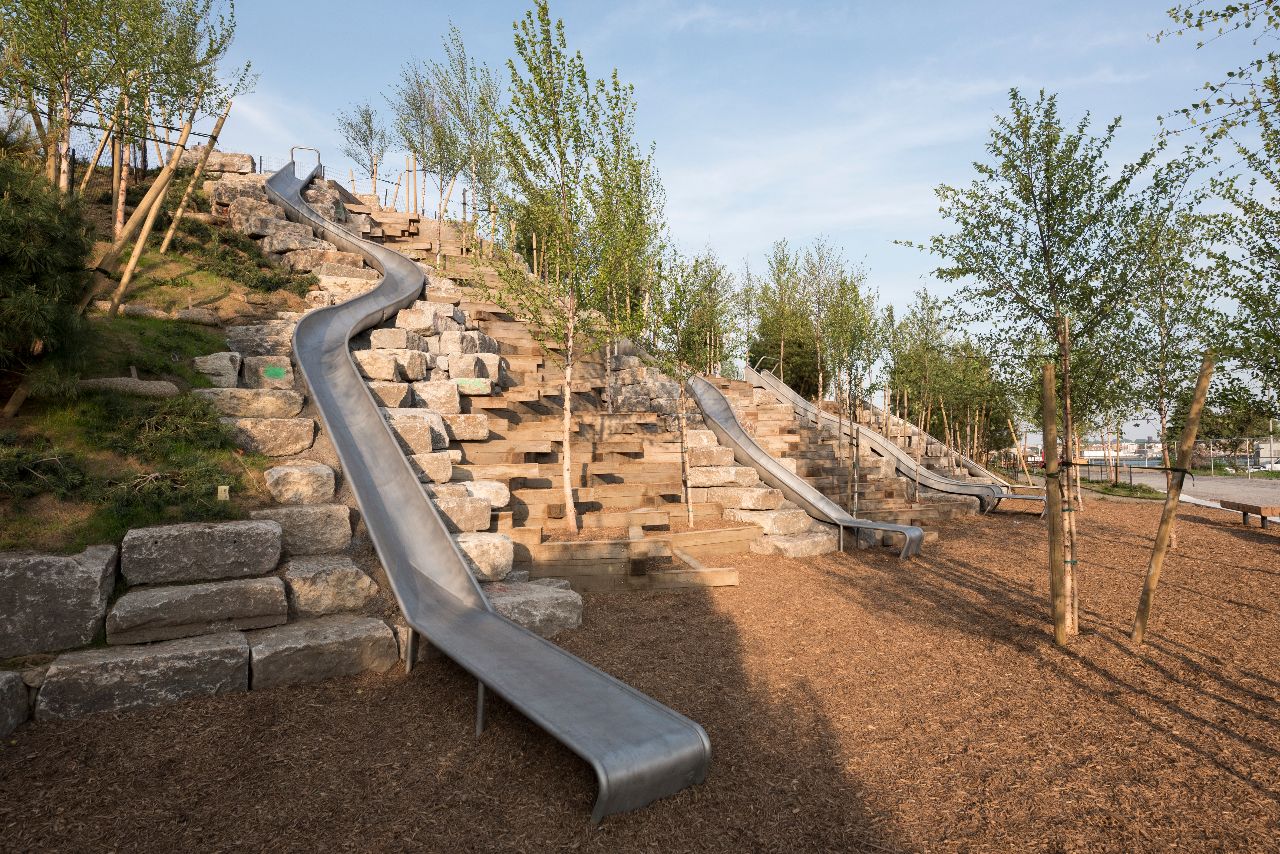 The Hills are home to more than 860 new trees and 41,000 new shrubs planted in new high-quality topsoil and protected from brackish groundwater by the new topography. The planting of each of the four hills is designed according to the micro-climates: varying degrees of slopes, exposure to sun, salty-spray, and prevailing wind and to accentuate key view corridors. The new lawns, plantings and permeable paving also reduce erosion and storm run-off, while allowing for water collection and irrigation.

Check out the video by Night Owls, and witness the incredible transformation of Governors Island with your own eyes.

West 8 is an award-winning international office for urban design and landscape architecture, founded in 1987 with offices in Rotterdam, New York and Belgium. Over the last three decades West 8 has established itself as a leading practice with an international team of 70 architects, urban designers, landscape architects and industrial engineers. West 8’s New York office was established after winning an international design competition in 2007 for the design of Governors Island Park, today the office continues to work on high profile design projects across North America.

About The Trust for Governors Island

The Trust for Governors Island is the nonprofit corporation created by the City of New York that is responsible for the redevelopment and operation of 150 acres of Governors Island. The Trust’s mission is to transform Governors Island into a vibrant resource for New York City, making this island at the center of New York Harbor a destination with extraordinary public open space, as well as educational, not-for-profit and commercial facilities.