From March 17 until August 6, Guido van der Werve participates in the groupshow 'The Arcades: Contemporary Art and Walter Benjamin' at the Jewish Museum in New York.

From March 17 until August 6, Guido van der Werve participates in the groupshow ‘The Arcades: Contemporary Art and Walter Benjamin’ at the Jewish Museum in New York.

The German Jewish writer Walter Benjamin (1892–1940), one of the most important philosophers and cultural critics of the twentieth century, began ‘The Arcades Project’ in 1927 as a short piece about Paris’s nineteenth-century iron-and-glass vaulted shopping passages. With their labyrinthine architecture and surrealistic juxtapositions of disparate objects and people, past and present, the arcades offered an ideal prism through which to examine the era’s capitalist metropolis and the phenomenon of modernity that had its origins there. Benjamin worked extensively on his manuscript, which grew into a sprawling compendium of quotations, reflections, and notes. When he was forced to flee Paris to escape Nazi persecution, he entrusted it to his friend Georges Bataille. Some years after Benjamin’s untimely death, the text was discovered and published.

‘The Arcades: Contemporary Art and Walter Benjamin’ will explore ‘The Arcades Project’ and its ongoing relevance through works of contemporary art representing the subjects of each of the book’s thirty-six chapters. The exhibition will combine archival material from the Walter Benjamin archive in Berlin, architectural models, and artwork to evoke the elaborate structure of Benjamin’s text.

Transposing Benjamin’s arcades to the galleries of the Museum, the exhibition invites the visitor to take on the role of the flâneur, the archetypal leisured city dweller who strolled through Paris at ease, coolly attentive and open to happenstance. In addition to traditional wall labels, the poet Kenneth Goldsmith will annotate each work with appropriated texts, extending Benjamin’s reflection on Paris as the capital of the nineteenth century into New York as the capital of the twentieth.

‘Nummer Dertien, Effugio C’ by Van der Werve is on show in this exhibition. 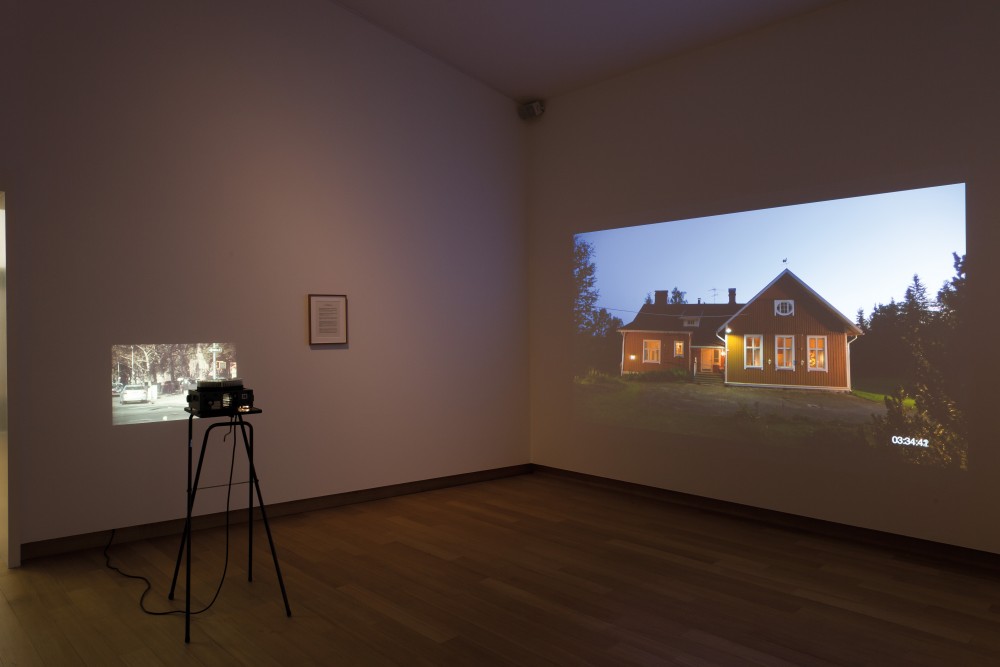 About ‘Nummer dertien, Effugio c, you’re always only half a day away’

‘Nummer dertien‘ has as a subtitle “Emotional poverty” and consists of three so called “effugio’s”, what something means as escape resorts. the third part, ‘Effugio c’, consists of a video of 12 hours. In one long shot from one perspective we see the artist running around his house in Finland. From 11 o’clock at night until 11 o’clock in the morning. The course of the film is clear: his energy reduces and and his muscles acidify. The approximately two and a half marathon require the extreme, physically and mentally.

Van der Werve strives to get through to his audience directly. In ‘Emotional poverty’ he brings together art, sports, self reflection and therapy.

Van der Werve was born in the Netherlands in 1977. He studied industrial design, archaeology, music composition, and Russian language and literature before enrolling at Amsterdam’s Rijksakademie van beeldende kunsten to study art. Although he began his career as a performance artist, van der Werve found that he preferred the aesthetic flexibility and freedom of film, which could document his actions in even the most remote sites without the need for a live audience. He has shown his works widely in Europe and the United States, where they were recently in exhibitions at the Museum of Modern Art and The Hirshhorn Museum and Sculpture Garden.