Hansje van Halem‘s talk is scheduled for Saturday, June 17, 2017 at 10:30 AM as part of the main Typographics conference schedule.

Hansje van Halem has run her studio in Amsterdam since 2003. In between deadlines for book designs, she fills time gaps with type drawings and empty book space with patterns. With a “practice makes perfect” mind-set, she taught herself not to be afraid of failure. Her time gaps soon took the upper hand and became her core business. While working on commissions from patterns for endpapers, architectural typography, and all scales in between, she creates a lot of overproduction. The talk will display a richness of design attempts that did not make the cut or ones that are waiting for the right opportunity. The benefits of 10+ years design experiments, failures and unused starting points have led to sweet revenge by up-cycling and up-scaling. 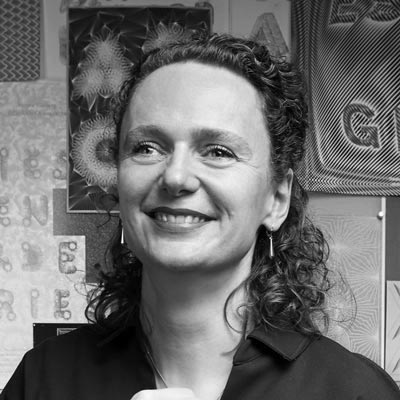 Typographics is a design festival for people who use type. The event series takes place June 12–22, 2017, and is devoted to contemp­orary typo­graphy, with talks, work­shops, and tours focusing on where typo­graphy is today and where its future may lie. It will be held at The Cooper Union in New York City.