Hella Jongerius in group exhibition Pathmakers: Women in Art, Craft and Design at Museum of Arts and Design

Hella Jongerius presents her work in the group exhibition Pathmakers: Women in Art, Craft and Design Midcentury and Today from April 28 to September 27 in MAD Museum

From April 28 to September 27, 2015, the Museum of Arts and Design (MAD) will present Pathmakers: Women in Modern Craft, Midcentury and Today, a groundbreaking exhibition that highlights the contributions of women to postwar visual culture. It will introduce audiences to leading women figures in the United States in modern craft in the 1950s and 60s, and will advance the scholarship on their aesthetic oeuvre, taking particular note of their breadth of formal and material concerns. The key figures in the exhibition had different professional trajectories. Some worked in the context of university courses and departments, while others found entrepreneurial success a nascent marketplace. Some worked in independent studios, while others juggled small-scale with mass production. The exhibition as a whole emphasizes women who envisioned hands-on production as a significant professional opportunity and mode of cultural engagement.

Pathmakers includes approximately 35 artists and will show how craft and design media (particularly textiles and ceramics) were especially open to women professionals in search of new opportunities at a time when painting, sculpture and architecture presented all but closed doors. The exhibition examines a range of themes, including Visual Relationships, which charts radical reinventions of material and technique in artistic creation; International Exchange, which focuses on the cross-pollination between international and American craft and design; Handmade Production, which looks at the relationship of handicraft to large-scale mass-production; Art Education, which examines the educational backdrop for women’s modernist experimentation; The Search for Taproots, which demonstrates the particularly American way that many cultural influences contributed to the development of modernism; and Influence on Contemporary Makers, which looks at work by leading women artist and designers working today.

Central to Pathmakers is the presentation of work by leading Dutch artist Hella Jongerius, who has become widely respected for unique way she fuses industry and craft, high and low tech, and tradition and contemporary. In 2013, Jongerius took part in an ambitious renovation of the United Nations North Delegates’ Lounge in New York City, in collaboration with Rem Koolhaas, Irma Boom, Gabriel Lester, Museum of Arts and Design

A portion of Hella Jongerius’ redesign of the United Nations Delegates’ Lounge, including a replica of the curtain of ceramic beads that covers the two-story window at the west end of the Lounge is presented in the exhibition. Because of security restrictions at the United Nations, the curtain that is installed in the Lounge is not as originally conceived. The exhibited curtain, recreated especially for Pathmakers and hand-knotted in her studio, is the design as Jongerius intended it. 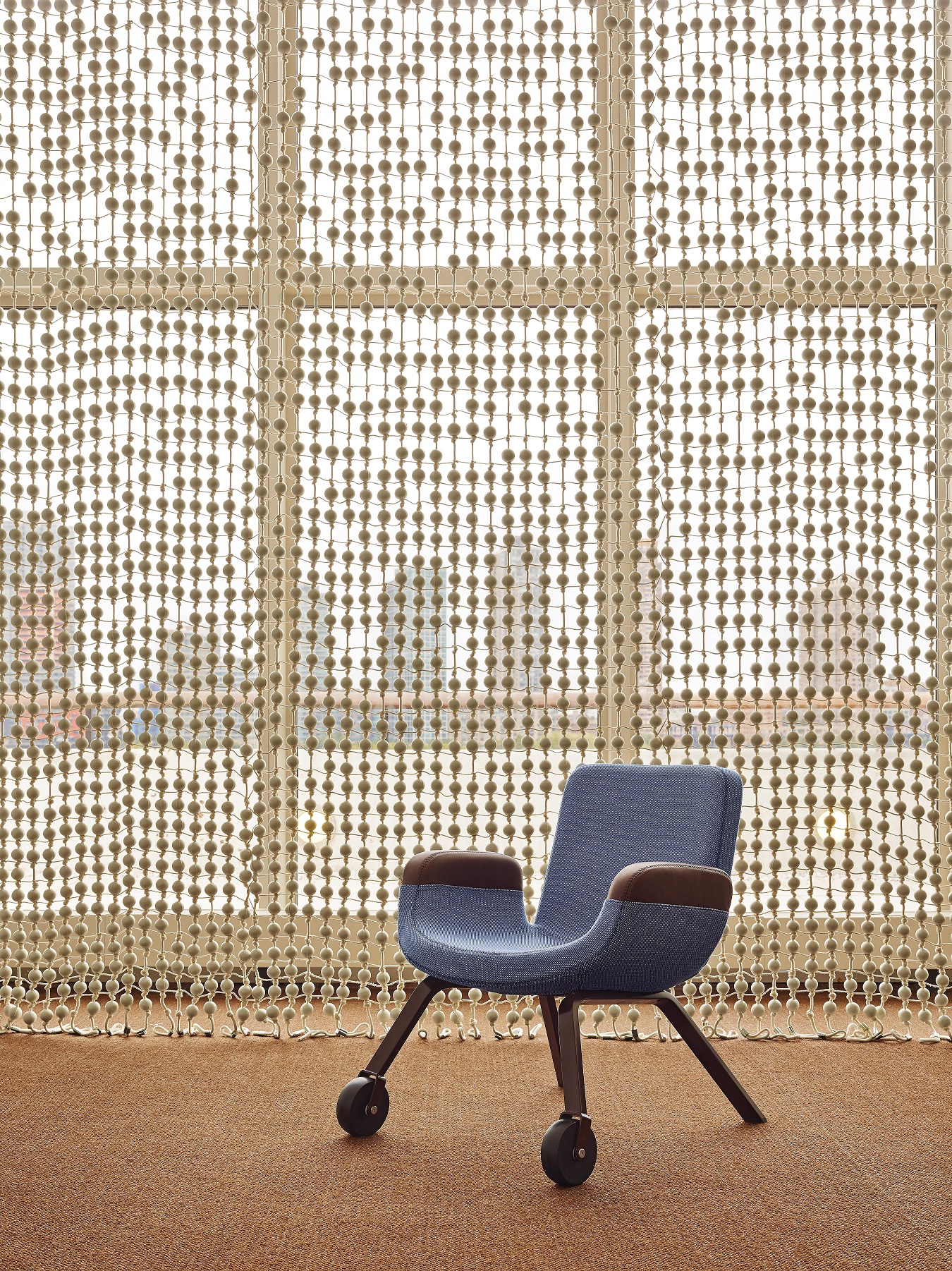 The Museum of Arts and Design (MAD) champions contemporary makers across creative fields, presenting artists, designers, and artisans who apply the highest level of ingenuity and skill to their work. Since the Museum’s founding in 1956 by philanthropist and visionary Aileen Osborn Webb, MAD has celebrated all facets of making and the creative processes by which materials are transformed, from traditional techniques to cutting-edge technologies. Today, the Museum’s curatorial program builds upon a rich history of exhibitions that emphasize a cross-disciplinary approach to art and design, and reveals the workmanship behind the objects and environments that shape our everyday lives. MAD provides an international platform for practitioners who are influencing the direction of cultural production and driving 21st-century innovation, fostering a participatory setting for visitors to have direct encounters with skilled making and compelling works of art and design.

Pathmakers: Women in Modern Craft, Midcentury and Today and Louise Schouwenberg. Together, these prominent Dutch artists, designers and other creative figures created a newly invigorated work and rest space for some of the world’s most important political and thought leaders. For Pathmakers, MAD is recreating Jongerius’ contributions to the UN Delegates’ Lounge by commissioning the artist to create a smaller version of her Knots and Beads Curtain (measuring 330 x 560 cm, approximately 17 square meters), which sits on a much larger scale on the northern façade of the UN Delegates Lounge. Jongerius’ Knot and Beads Curtain consists of knotted yarn and porcelain beads, which are conceptually and aesthetically rooted in Dutch culture. The knotted yarn draws from Dutch maritime history, in particular the knotted ropes used in various fishing techniques. Similarly, the beads reference the Netherlands’ rich handicraft ceramic industry, and were created in collaboration with craftsmen from the Royal Tichelaar in Makkum, the oldest ceramic company in the Netherlands.

In addition to the Knots and Beads Curtain, MAD will present several pieces of furniture that were selected and/or created for the Delegates’ Lounge. One of these is Jongerius’ Sphere Table, a solid wood table with an attached half-sphere of opalescent acrylic glass. The sphere can be attached either the left or right side of the table and thus provides options for adjustment to suit individual needs, and to provide users with adequate privacy. MAD plans to present two Sphere Tables with two accompanying chairs, Fauteuil Directions, which are produced by the company Vitra. MAD will also present one of Jongerius’ UN Lounge Chairs, a light and mobile seating device that was designed to facilitate interaction amongst its users. The practical leather covers protect the armrests from dirt and wear, and the vibrant color options—which include a spectrum of subdued and bright greens and blues—create an informal, energetic atmosphere.

Jongerius’ works will receive prominence in Pathmakers, filling up the entire west gallery of the Museum’s fourth floor (about 1/6 of the exhibition’s total floor space). The Knots and Beads Curtain will be hung in one of two arrangements. The first is over a glass “floor cut” where it would serve as a divider between the installation and the rest of the gallery. The other is arranged at an angle to the gallery’s largest window, which would more clearly create the effect of the light passing through it. In both cases visitors would be able to walk all the way around the curtain. The UN Lounge Chair, and two Sphere Tables and Fauteuil Directions will be presented near the curtain in western quadrant of the fourth floor gallery, either on a slightly raised platform along the western wall, or scattered throughout the space. In either scenario, the Museum hopes to create an immersive space that evokes the UN Delegates’ Lounge.

After its presentation at the Museum of Arts and Design, the exhibition will travel to the National Museum of Women in the Arts, Washington, DC from October 30, 2015 to February 28, 2016.