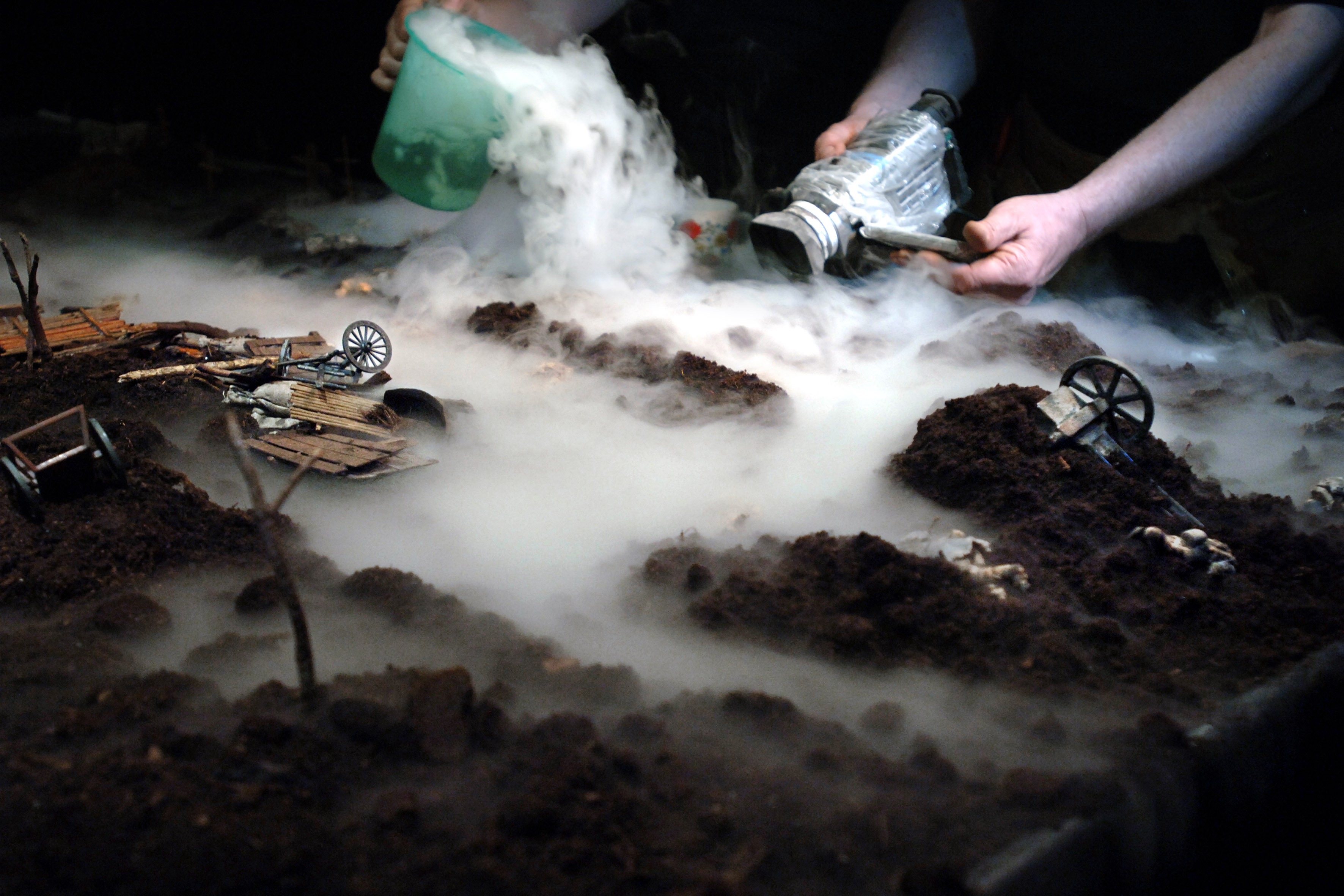 Hotel Modern & Arthur Sauer perform THE GREAT WAR.
During the First World War, millions of soldiers wrote letters home to their loved ones. Millions died in the fire and the mud. Millions returned home with stories that could not be told – or could not be heard. Just like after any war. In this live animation film, Dutch theatre company Hotel Modern and composer Arthur Sauer try to make the soldiers’ experiences tangible. On stage a scaled-down film set is built; the audience sees the landscapes of the Western front being brought to life in miniature, using sawdust, potting soil, rusty nails and parsley ‘trees’. Foley artist and composer Arthur Sauer provides the soundtrack for the film, drumming on a table to create the sound of an exploding hand grenade and striking a match to suggest escaping mustard gas. These images and sounds are interspersed with spoken testimonies and authentic letters home written by trench soldiers. Hotel Modern was awarded the CJP Trophy and the European Prix de Coppet for The Great War. The performance has toured around Europe, Russia, Singapore, Hong Kong, China, Egypt, Canada and the United States over the past few years.

Dutch theatre company Hotel Modern blends visual art, object theatre, drama, music, film, modelling and performance in its evocative productions. Scale models play an important role in their performances; these are used to, literally, view the world from a macro perspective. Hotel Modern’s approach is unique in the field of theatre and it enables them to focus on subjects in entirely new ways. In their international theatre hit ‘The Great War’ the trenches of the First World War are represented. On stage a miniature film set is build, using parsley, soil and rusty nails. With small cameras the actors dive into the trenches and tell a story through the eyes of the fighting soldiers. The images are being projected on a big screen and are guided by a live soundtrack. The result is amazingly intense and realistic. The performance ‘Kamp’ is a theatrical portrait of Auschwitz, in which a stage filling scale model of an extermination camp is brought to life. The group also produces more absurd and lighter work. ‘Shrimp Tales’ for example is a funny play about humanity, performed by 350 real dried shrimps.

Hotel Modern was founded in 1997 in Rotterdam. Its members are Arlène Hoornweg and Pauline Kalker, who both graduated from Arnhem Theatre Academy, and visual artist, model maker and performer Herman Helle. The company won numerous prizes, including the European Prix de Coppet and the prestigious Dutch VSCD Mime Prize. Hotel Modern performs all over the world, from Paris to Milan and from New York to Tokyo.
Arthur Sauer studied Composition and Music Registration at the Royal Conservatory in The Hague. He composes for both acoustic and electronic instruments, for film, theatre and other media. He also builds acoustic and electronic instruments and is a software programmer. He also appears as a live musician in theatre performances.