I am in heaven – exhibition by Erik van Lieshout 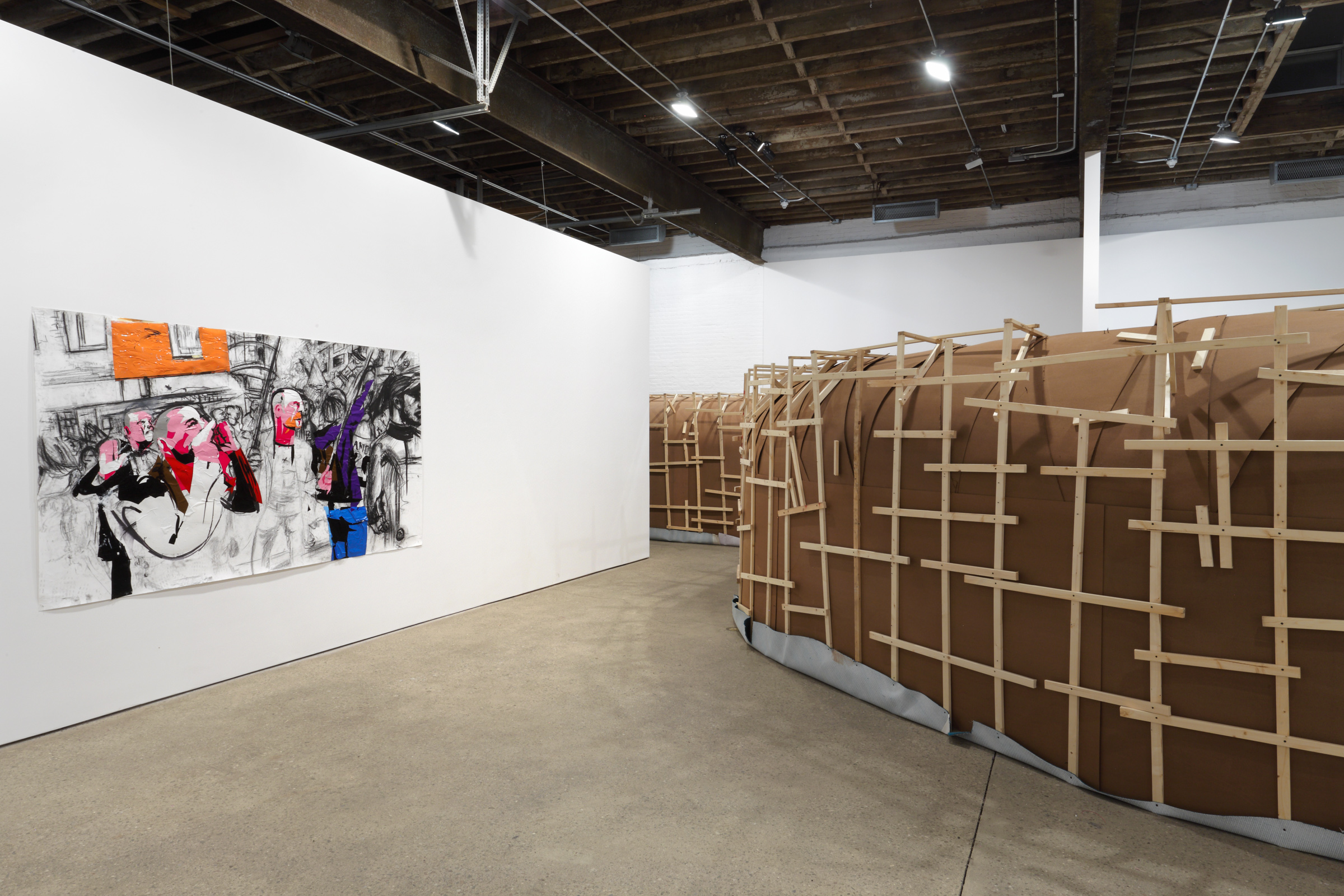 The Rotterdam-based artist presents new drawings and a large-scale sculptural installation that doubles as a cinema for viewing his new feature film, WORK. Erik van Lieshout, whose background is in painting, is best known today for his confrontational video installations and drawings. His work navigates the limits of vulgarity, censorship, and consumer culture, and focuses a humorous, yet critical spotlight onto present day social and political realities, as well as our own notions of idealism and political engagement.

Upon entering the gallery the viewer is ushered into a life-size tunnel haphazardly built out of scrap construction materials and lined with a patchwork of carpet. This structure stems from Van Lieshout’s film installation presented at the Hermitage Museum in St. Petersburg, Russia for 2014’s Manifesta 10, which mimicked the architecture of the museum’s cat-populated basement and served as a primary site for his research and video documentation. Continuing through the tunnel visitors are invited to sit and view the feature film in an intimate cinema setting. The film, WORK*, fuses together and builds upon footage from two previous projects, The Workers (2013) and The Basement (2014), to create a vigorously candid “making of” documentary that investigates the role of the film producer, the commissioning institution, and the artist’s relationship to individual ambition and the ego. Van Lieshout struggles to understand why people help each other and their communities, and how to manage tensions between his personal life and his artistic career. Is it possible for an artist to be modest, to have no ego? Is life following art or is art following life? The exhibition also features large-scale charcoal and vinyl collages that portray a series of enraged protesters – mouths agape in mid roar – participating in recent political demonstrations. These synthetically colored and densely layered scenes, based on images collected from newspaper clippings, evoke a sense of immediacy and raw fury that simultaneously reinforce and undo their own histories. It is clear that Van Lieshout, as the Dutch art historian Dominic van den Boogerd states, “is not concerned with art for the sake of provocation – but with provocation for the sake of art.”

The exhibition opens on Thursday, January 15 and will run through Saturday, February 28, 2015. The gallery is open Tuesday through Saturday, 10 am-6 pm. For further information and images, please contact the Anton Kern Gallery.