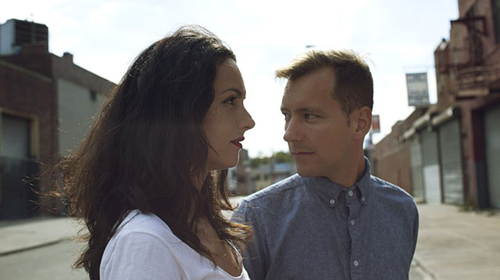 About The Long View

New storytelling technologies appear every day, but great projects take years to create. Directors Kel O’Neill and Eline Jongsma talk about the four-year, ten-country journey behind their interactive documentary Empire and discuss the virtues and curses of working with cutting-edge technology.

Jongsma + O’Neill are Eline Jongsma & Kel O’Neill, an award-winning Dutch-American filmmaking team working at the intersection of documentary, art, and technology. They are the 2015 winners of the Tim Hetherington Visionary Award.

Their latest project, Empire, was one of the first interactive documentaries acquired by POV, PBS’s long-running documentary program. Their work has been exhibited by such world-renowned institutions as Lincoln Center, REDCAT and the Stedelijk Museum Bureau Amsterdam, and has appeared at the New York Film Festival, the International Documentary Film Festival Amsterdam, The Los Angeles Film Festival, and South by Southwest.

They have have received grants and funding support from numerous institutions including the NEA, the European Cultural Foundation, and the Mondriaan Fund. In addition, they are contributors to Vice, De Correspondent, PBS.org and the Creators Project, and work as immersive media consultants for clients such as The Economist. Corporate clients include Siemens and Red Bull Media House.

IDFA DocLab is a festival program for new media within the International Documentary Film Festival Amsterdam(IDFA). The mission of IDFA DocLab is to showcase interactive documentaries and other new digital artforms that succesfully push the boundaries of documentary storytelling in the age of the interface. Projects are curated and presented online, as well as during live cinema events, exhibitions, workshops and industry panels.

{The And} presented by IDFA DocLab is a special interactive documentary screening. Introduced by Caspar Sonnen, IDFA DocLab, {The And} is an interactive experience that places viewers in the the intimate space between couples.

An interactive documentary in which the viewer can navigate through 30 couples discussing the big themes of love and relationships.

Together for three months and head over heels, or married for a quarter of a century and familiar with every wrinkle and idiosyncrasy. In both cases, love is hard work and in any relationship this work consists mainly of talking, asking questions and listening. In the interactive documentary {The And}, director Topaz Adizes has 30 couples – gay and straight, inexperienced teenagers and senior citizens who have been through all the highs and lows – ask one another 412 candid questions. All aspects of a relationship are investigated: the distribution of power, the biggest annoyances, greatest expectations and most beautiful memories. And of course sex. Every viewer gets a different combination of text fragments. An initial tailor-made selection is made on the basis of answers to four questions, ranging from “Is porn a dirty secret for you or an educational experience?” to “When furnishing a new house, do you choose as much space as possible or as much furniture as possible?” After watching the resulting one-and-a-half minute compilation, the viewer can make choices by clicking on themes or couples. There is also an option to initiate a discussion with your own partner prompted by specially designed questions. When watching and talking, we are confronted in turn by tenderness, uneasiness and confusion.