March 31, the New Amsterdam History Center organizes the panel discussion “New Netherland and New England Women Compared: Powers, Oppressions, Aspirations” at the West End Collegiate Church in New York. Cornelia Hughes Dayton, expert in Early British North America at the University of Connecticut, will be the moderator and presenter of the event. In addition, Kim Todt (Cornell University), Deborah Hamer (College of William and Mary), and Andrea Mosterman (University of New Orleans) will contribute their research on New Netherland women. We asked Andrea Mosterman what we should expect of the event, while discussing the various (female) residents of New Netherland, and the future of New Netherland studies overall.

We start off by asking Mosterman about the title of the event, which almost sounds like a compelling novel. She laughs. “Is that really the title? I do not know if we will be able to live up to that much excitement! The evening is about comparing the rights of New Netherland and New England women, a subject many people are curious about. It is often believed that the women of New Netherland were granted far more rights, and that their situation significantly differed from their New England counterparts. But was that really the case?”

The speaker, Dayton, will share her knowledge on the women of New England, while Mosterman and the others will focus on New Netherland. Hamer did research on Native American women in New Netherland and Dutch Brazil, Todt is an expert on female presence in the Dutch Atlantic, and Mosterman is specialized in the rights of African women. A varied program. “What makes this evening special, is the variety in expertise. People are often so focused on their own research, that they neglect the comparison to other areas. I am very curious how all our different perspectives will compare and fit together!”

Mosterman’s research focuses on free and unfree African women in the legal system of New Netherland. “There are multiple examples of African women under Dutch rule who own property, enter a contract, or go to court to get their freedom. However, the practical realities of slavery are quite similar to New England, as neither the rights nor limits of enslaved people are codified in either of these regions. It is up to these women themselves to go to court or try to enter a contract – in turn, English and Dutch courts reacted to their actions.”

But did these women really have an honest chance to regain their freedom, own a piece of land or enter a contract? “Yes, in both areas it happened. In the Massachusetts Bay colony, for example, Reverend Matthias Plant left a piece of land to one of his enslaved women in his will, and there are several examples of slaves who obtained their freedom in New England courts. However, the big difference in New England law is, and this is for all women, the “femme covert” clause. According to this legislation, a woman lost all her individual rights after she got married. From then on, she would be legally covered by her husband, and lost the ability to independently start a court case, enter a contract, or own property. In New Netherland, this kind of legislation did not exist.”

Some historians have described New Netherland women of the seventeenth century as uniquely independent. Mosterman has some reservations. “The husband was often still perceived as a women’s representative, even though she was technically able to account for herself. Just because the possibilities were there, did not mean that women – Dutch or African –  were equal to men.”

Nevertheless, New Netherland’s legislation left room for different situations. “In 1662, three female slaves of the Dutch West Indian Company petitioned the colonial council for their freedom. All three were married, yet none of their husbands took any part in the matter. The women were granted conditional freedom, which in their case meant they had to clean Director-General Peter Stuyvesant’s house every week in exchange for this new status. When two of the women died, the remaining woman, Mayken van Angola, returned to court to plea for full freedom. She had become too old to clean Stuyvesant’s house by herself, while her husband had been free all along, and owned a piece of land in Manhattan. Possibly, it was her situation that set her free: she had access to land and she had a free husband, so the Company knew she would not require any external care. This woman accounted for herself in court twice, which would have not been possible in New England.”

This woman and her husband were not the only free Africans that called New Amsterdam home. “The first two we know of were Domingo Antony and Catalina Anthony in 1643, who both received Company land in the area that we call Greenwich Village today. A year later, eleven Africans petitioned for their freedom, who became the first to be granted conditional freedom. They each received a piece of land as well, but had to obey to three conditions. First, they had to provide assistance whenever the Company required it. Second, they had to pay yearly dues to the Company of “30 skepels of maize, wheat, peas or beans, and one fat hog.” Third, their children remained slaves. After these 11 men, several other Company slaves received similar conditional freedom, but the conditions differed each time. The Company usually granted them land as well, mainly so they would be able to grow their own food.”

New Amsterdam is often thought of as ‘a beacon of tolerance in an intolerant world,’ where people from all kinds of different backgrounds and beliefs lived in relative harmony together. Is this a romanticized picture? “I think relative is a good word to use here. In a time when inequality was the norm, New Amsterdam was relatively tolerant compared to other parts of colonial America. However, not everyone was treated in a similar way: that goes for Africans, but also for Jews, Quakers, and women. Of course it is nice to believe it was close to perfect, because it did differ from other areas in some ways, but none of their rights did even come close to our standards today.”

At the end of the day, the Dutch were mainly pragmatic. “When Jewish colonists from Dutch Brazil applied to settle in New Netherland, Stuyvesant refused at first, but the Company persuaded him to allow them to stay because of their investments in the Company. This kind of decision-making defined the unique situation of New Netherland. The Dutch could be very tolerant, as long it was beneficial and caused no further trouble in their society.”

Compared to New England, New Netherland existed for a very short period of time. In 2016, is there still anything left to discover? “Of course! Initially, there had been done very little research on early Dutch America, so historians could freely publish about sources that were never touched before. Now, the field is maturing. Today, we are able to compare different theories and perspectives to get more advanced interpretations of New Netherland history. For example, I think we should perceive New Netherland more as an entangled history. Historians have mostly considered the histories of Dutch, Africans, and women separately, even though they lived in the same houses, and worked together. When you only discuss them separately, you will never understand the complete story. Also, historians are starting to write for a broader audience, and include a wider variety of narratives in their story of New Netherland. This is the beautiful thing about history; there is always something new to discover, a voice that has not been heard, or a perspective that has been neglected. Really, there is still so much out there that will contribute to a better understanding of New Netherland.” 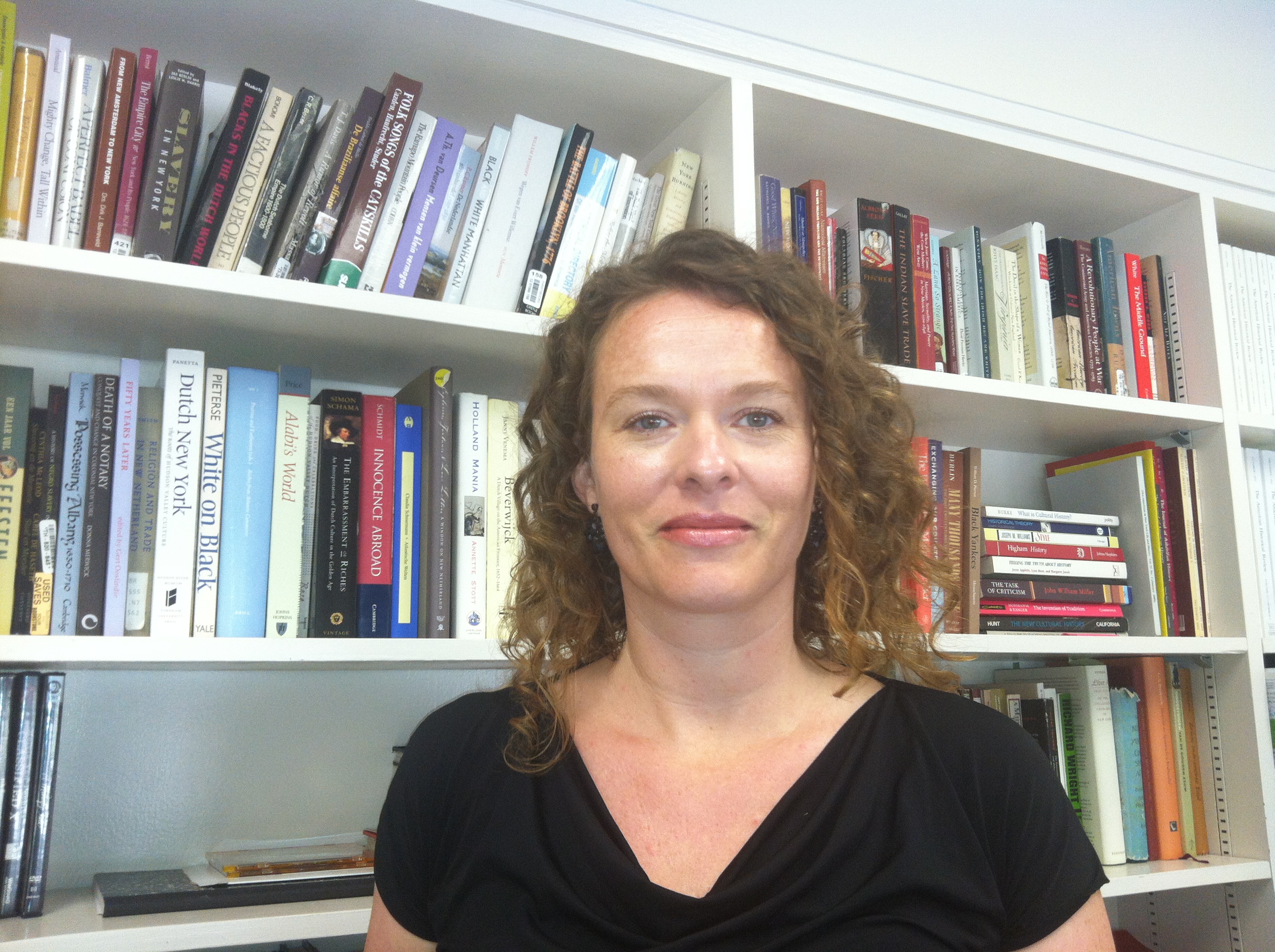 Andrea Mosterman completed her Ph.D. at Boston University, specializing in Atlantic and Early American History. She is currently working on a manuscript that examines exchanges and interactions between African and Dutch descendants in Early New York. Her broader research explores the multi-faceted dimensions of slavery, the slave trade, and cross-cultural contact in the Early Modern Dutch Atlantic.

About the New Amsterdam History Center

The mission of the New Amsterdam History Center is to encourage public exploration of the early history of New Amsterdam and New York City, its diverse peoples, landscapes, institutions, and global legacy. To disseminate information and encourage greater knowledge about the formative histories of New York City and New Netherland, the Center will establish and maintain a historical reference and research center and archives, build a dynamic internet presence, assist in creating school curricula, promote and support research and scholarship, issue publications, and organize historical and cultural activities, programs and events to enrich the public’s understanding of the New Amsterdam era.

Building on the enduring heritage and values shared between the peoples of the Netherlands and the United States, the Netherland-America Foundation (NAF) seeks to further strengthen the bonds between our two countries through exchange in the arts, sciences, education, business and public affairs.

About the Collegiate Churches of New York

Established in 1628, The Collegiate Church of New York has old, deep roots in a great city, yet they have embraced a thoroughly modern perspective on spirituality and community in a greater world. Founded in the tradition of Reformed Protestantism, the church responds to the spiritual needs of people today by embracing diversity, affirmation, openness and justice.