We recently sat down with Jerry van Eyck, founder of award-winning urban design and landscape architecture firm !melk. We talked with Van Eyck about the projects that he is working on in the US, and around the world, and about the fact that his biggest wish is to receive a commission for !melk in the Netherlands. At the moment, !melk is working on a large-scale project in Las Vegas, developing a pedestrian realm along the Las Vegas Strip that will include the first-ever public park along this world-famous street, that will open in April next year. Before we talked about this project, however, we wanted to know a little more about the man behind the design. Although Jerry van Eyck is a registered Landscape Architect, as well as a Professor of Landscape Architecture (at the Ivy League University of Pennsylvania), he had his training in Industrial Design. After graduating from the Eindhoven Design Academy in 1992, he owned a small design firm in Eindhoven, while doing some freelance work on the side for some of the more established Architecture firms in the Netherlands. That is how he came in contact with the Rotterdam-based Landscape Architecture firm West 8, the firm that he integrated with and worked at for almost 18 years, 10 of which as a Partner. After winning the International Design Competition to develop Governors Island in New York into a Park, he relocated to the US in 2008; first to set up West 8’s NY-branch, and two years later his own firm: !melk.

So why !melk? We wondered how Van Eyck came up with this very Dutch name.

“Well, I’m very proud of my Dutch roots, and I was thinking of a good name that would reflect that. I came up with “melk” (‘melk’ means ‘milk’ in English) because basically it is the most important product of the Dutch landscape. You see, the Netherlands is largely man-made, so you could say that the whole country IS Landscape Architecture! Its entire layout is based on efficiency and pragmatic use. One of those uses is agriculture – dairy industry to be specific. With success of course, especially if you look at the world’s ranking list of agricultural products exporting countries, on which the Netherlands appears on number 3, behind the US and France! That’s when I thought that “melk” would be a great name for an urban design and landscape architecture firm.”

Now that we knew how !melk came to be, we wondered what set it apart from other architecture and design firms. Why would !melk be chosen to design the master plan of the metamorphosis of part of the Las Vegas Strip into a public park? Van Eyck explained to us how !melk sets to work:

“One of the qualities that set !melk apart is that, unlike many other design firms, we don’t have a certain ‘style’ or pre-meditated ‘formula’ that we apply to our designs. Instead, we look at the unique qualities that a place or city has. Those inherent qualities include everything ranging from the history of the place, to its geographical location and built form, to the local culture and lifestyle, etcetera. Those are the attributes we take as a starting point and as a driver for our designs. Our aim is always to end up with results that are unique and ‘of the place’.”

So in the case of Las Vegas does this mean the park !melk is designing will be like the rest of the city, filled with bells and whistles?

“No not at all. People get tired of bells and whistles pretty quickly. For instance, if you live in NYC, then you don’t spend time at Times Square unless you have to. The same goes for Vegas. Personally, what I find most attractive about Las Vegas is the breathtaking nature and the vastness of the Mojave Desert that surrounds it. That is so powerful, that you’ll never be able to top that with any bells or whistles. The colors and patterns of the desert, combined with the notion that Las Vegas once was this green oasis, with trees and water.” 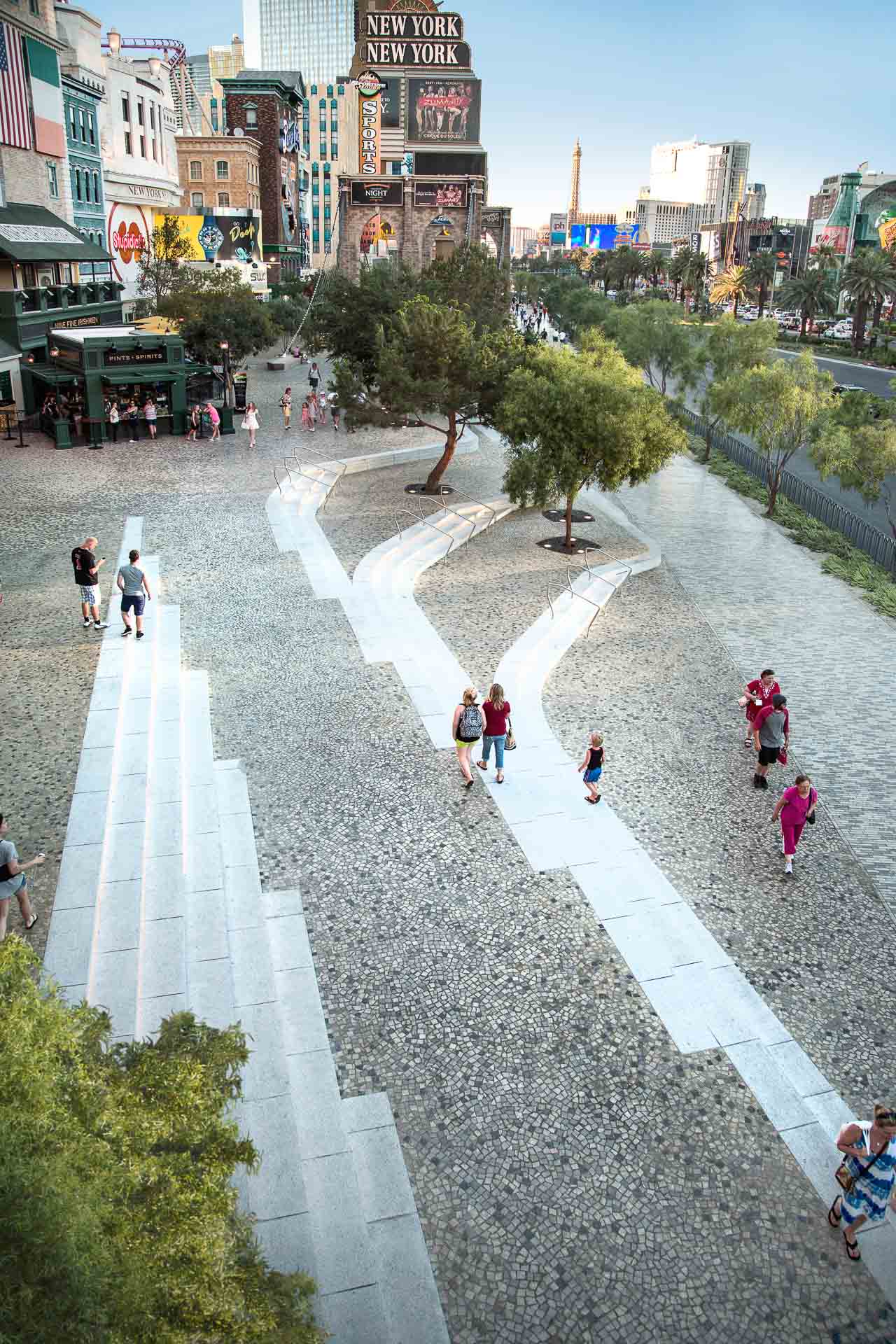 The idea to create a public park on the Las Vegas Strip originates from MGM Resorts International, owner of about sixty percent of the properties and hotels along the Strip. In a city in which most icons are copies of already existing icons, an original space, especially a public one, is an exciting venture, especially now that it appears that gambling is no longer the prime source of income in the ‘City of Sins’. Since 2005, the average annual gambling spenditure per visitor officially started to go down, but at the same time the visitor numbers were increasing. The trend is that visitors now spend more and more towards other type of offerings such as restaurants, clubs, shows, and shopping. In addition, the increase in visitors has led to more people being outside, walking up and down the Strip, instead of taking cabs or staying inside their hotels for most of the day. According to Van Eyck, MGM came to understand the commercial potential of catering to a pedestrian audience. Las Vegas is no longer just about the experience inside the hotels and casinos, but about the experience outside of them as well.

In 2012, MGM decided to hire !melk. Van Eyck and his team were tasked to develop the masterplan and design the outdoor public spaces for a $400M first phase, which besides public spaces, also included a large scale renovation of the hotel facades of the New York New York and Monte Carlo properties (with sidewalk cafes, restaurants, shops and new hotel/casino entrances) as well as a new multi functional sports and events Arena. !melk’s brief was to make the Strip an attractive and walkable boulevard -of course with the underlying ambition to generate extra revenue for MGM, but besides that, the project had a whole other kind of potential. There now was the opportunity to create a Las Vegas destination based on authenticity, not on fantasy. A ‘real’ place, that’s economically AND ecologically sustainable. 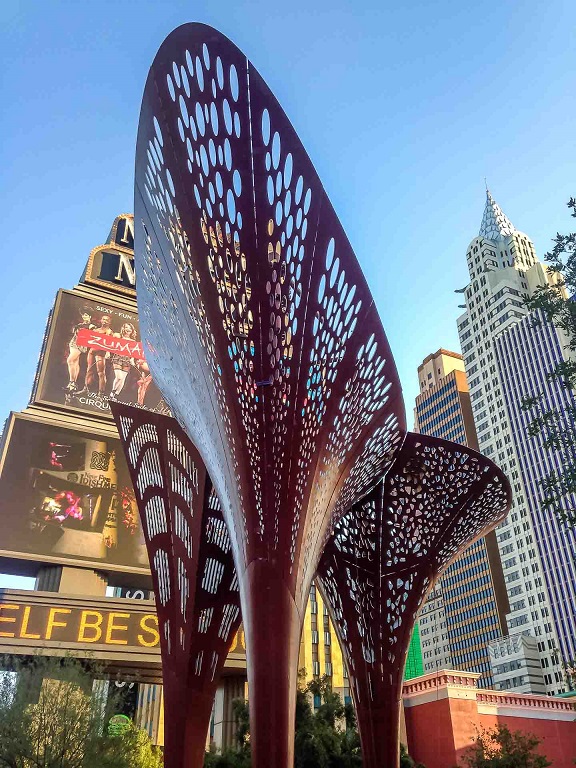 “When you’re Dutch, you know what it’s like to live in a place that really shouldn’t be there, since the Dutch created large parts of the Netherlands out of water. In Vegas the same thing applies, except there it’s not an excess of water, but a lack of it that signifies this. I think that when you build a city you need to be constantly aware of the importance of Mother Nature. You shouldn’t fight her; it’s not a competition; but you should try to coexist. That’s what we’re trying to do with our Vegas project; we try to be ecologically responsible. We’re implementing sustainable water harvesting systems and we use vegetation that is indigenous to the Vegas area. Yes, we’re creating a commercial environment, but we’re doing it in a way that’s highly ecologically sustainable too.”

Van Eyck explained that ecological sustainability is becoming increasingly important in the US, especially in a city like New York, where !melk is located.

“Ever since Hurricane Sandy, New York is much more aware of the balance that needs to be kept with nature; you can see that in the resiliency projects that are being implemented in the city. I think that sustainability is incredibly important; however, what I don’t like is that people automatically think that ‘sustainable’ means that everything has to look ‘green and fluffy’. Especially in the case of New York that doesn’t fit with the character of a ‘Metropolis’. For me design is all about enhancing the identity of a place, and it’s a second nature for us to always integrate the latest innovative sustainability systems and materials in our designs. But moreover, I think that sustainability is much more than making a place more environmentally friendly; it’s also about economical and social sustainability; I believe that public spaces are an essential driver for economic growth – and always worth the investment!

We have highlighted a few of !melk’s current projects below. To find out more about Jerry van Eyck, !melk, and the projects the firm does around the world, check out the !melk website here.

The award-winning comprehensive Master Plan for Hance Park envisions a 32-acre downtown civic space by establishing a uniquely-Phoenix park identity. The park’s design vocabulary evolves as one journeys through “rooms” and “canyons,” encountering spaces that are both exciting and memorable. The overall design is divided into three major realms: neighborhood park, daily urban life, and civic engagement. Key moments are reinforced by prominent shade structures. Native and adapted plantings have been carefully selected to frame corridors, produce fragrance, provide extra shade, and create intimacy. All plant material is irrigated by recharge basins, which are wholly integrated into the park design in order to solidify the park’s urban sustainability initiative. By capturing irrigation run-off and using cutting-edge irrigation technologies, water consumption will be minimized. This ongoing project will serve as a sustainability model for large urban parks in arid climates.

Currently under construction, The Barn is the pilot project for The Bridge District in the City of West Sacramento, CA — a new 178-acre mix-use neighborhood one mile from the California State Capitol. Positioned along the Sacramento River, The Barn is a multi-use structure that blurs the disciplinary boundaries of Architecture, Landscape Architecture, and Structural Engineering.

Situated within the larger Northern California agricultural zone, the sculptural form of The Barn is inspired by a sprouting vegetable seed. This form is then facilitated by a contemporary interpretation of traditional barn building components with the aid of parametric design.

Structurally, the building is designed to seemingly defy gravity. As a double cantilever, the superstructure springs upward from two independent foundations, meeting at a dramatic apex that forms a sinuous canopy. The beams and trusses are constructed from glued laminated wood. Intermittent steel reinforcements join the various trusses into beautifully expressed trestles visible from within the two enclosed “pods” and from the exposed underside of the canopy. The shell of the structure is achieved by using nominal wood members, laid side-by-side in a singular direction, to create straight line generated curves upon which the shingle roofing can be applied.

Programmatically, the project is comprised of two “pods” from which each side of the superstructure contacts the ground, an open air canopy, and a larger landscape that connects to the river walk and new development. The “pods” have different uses with one serving as a restaurant and the other serving as the leasing office for new developments around the Bridge District. The restaurant, which doubles as a beer garden, provides outdoor seating that will be protected from the sun beneath an 80-foot long canopy that soars 20-feet in the air. 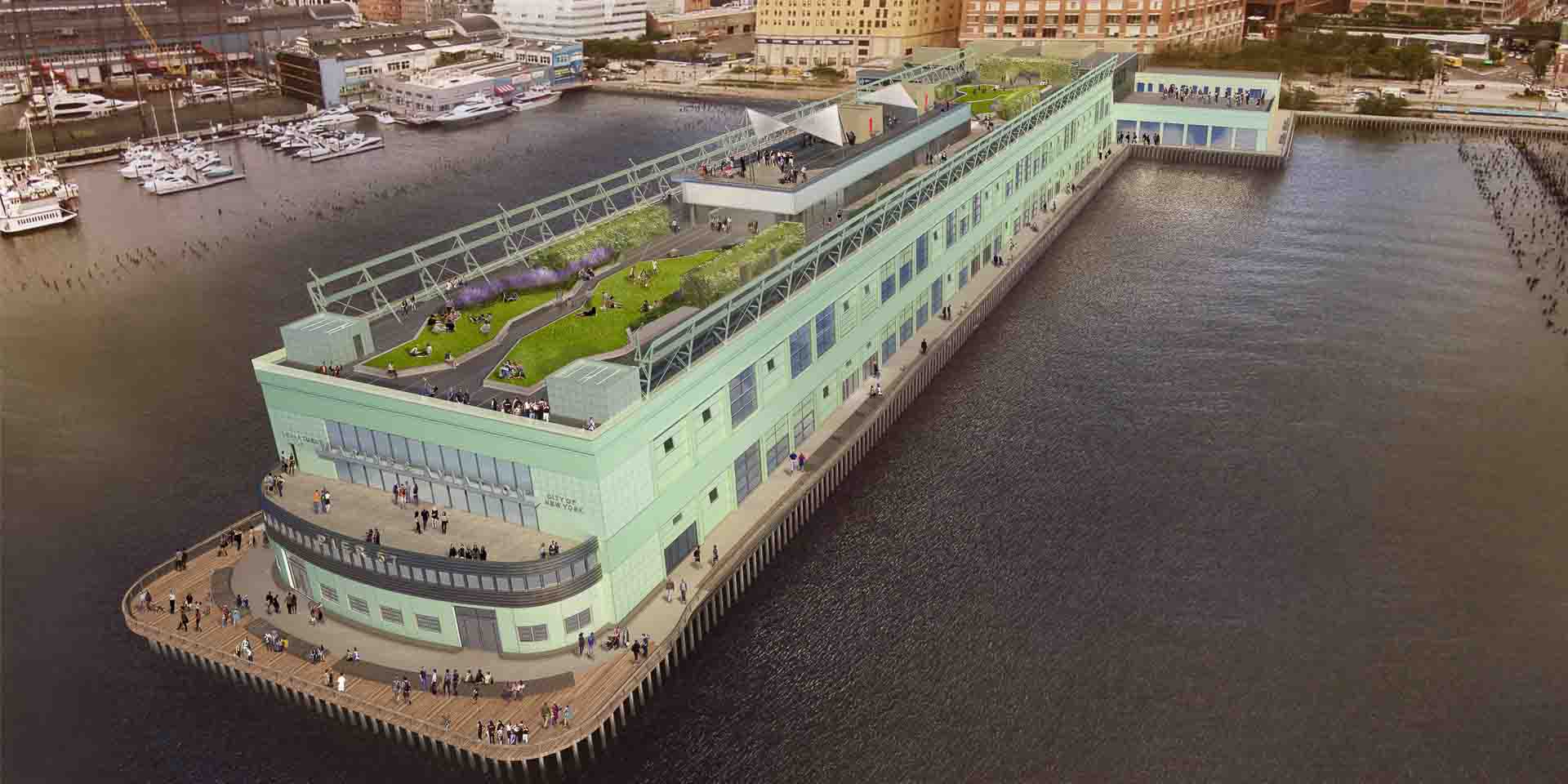 !melk has designed a new addition to the network of waterfront public spaces that comprises the Hudson River Park. Historic Pier 57 includes Anthony Bourdain’s curated food market, an office space for Google, a public esplanade, and a 2.5-acre “Sky Park” situated on the roof of the iconic pier structure.

As such, a formerly derelict structure is transformed into a center for entertainment, commerce, and the arts. The overall design complements the vibrant character of the neighborhood (The Meat Packing District), and celebrates the Pier’s post-industrial setting. The Sky Park is visible from afar and offers spectacular views back to the city as well as across the Hudson River. It is a multi-functional public destination with picnic lawns, viewing decks, and a restaurant. An open-air amphitheater doubles as the main seating area for summertime events and film screenings hosted by Tribeca Film Festival.